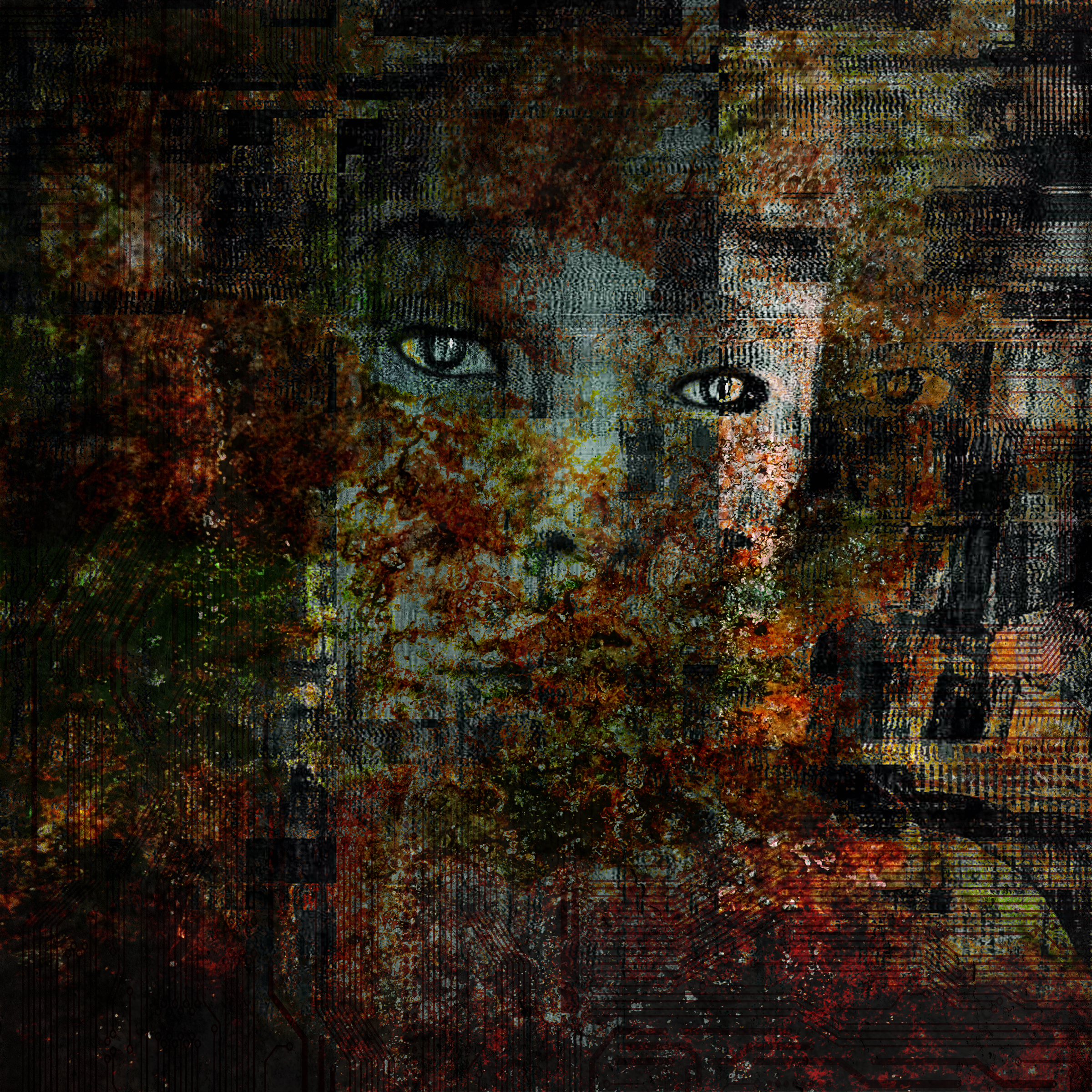 By David RodriguezJuly 8, 2020 No Comments

ZOMBIESHARK! are abrasive and calculated, a transhumanist manifestation of machine and, well, even more machine. Thankfully, they’re also fun as hell.

It seems that not only have I seen the chaos of this year charmingly matched in a number of equally chaotic releases, but I’ve also allowed myself to become more uninhibited with the music I enjoy and how I enjoy it. I mean, I usually don’t hold much back anyway, but I’ve found a little niche – a raw spot to lay in while I listen to absolute primal slammers that pet my reptilian brain. Fuck it, right? The world’s on fire, I’ll do what I want.

While y’all are over there listening to sophisticated stuff and commenting on the emotionality of thoughtful poet-singers (who am I kidding – I do this too), I’m over here banging my big stone club on dinosaur heads to secure a meal for me and my cavewife named OUUAAH for the next month. Sweet lady. Now that I’ve pissed off every paleontologist in the world by insinuating dinosaurs and early humans coexisted in the same time period, let’s talk about ZOMBIESHARK!.

This band, a duo from Philly, are many things, the least among them is subtle – just the way I like it. Billed as cybergrind and Nintendocore along with some other metal-related descriptors, their sound is much like traveling through a hostile, corrupted ROM hack of a video game. More audio glitches than a Bethesda game and heavier than a Metal Slug, their album I Will Destroy You, Myself, And Everything I’ve Ever Loved. is about as abrasive as you’d expect, but also surprisingly groovy and approachable in areas. If you checked out the latest Codex Orzhova album and liked it, but maybe wanted something a bit more grindcore/metal-based and less chiptuney, then this should be the Bimmy to your Jimmy.

So, what we have here are a lot of electronic elements that burn, phase, pulse, tweak, and otherwise distort the sonic scenery of all these songs as a whole. Sometimes you’ll get a cleaner synthesizer sound, but it’s like finding a roll of paper towels in a water treatment plant – it’s not going to do much to make things pretty. Then you have programmed drums, which I’m personally a fan of. I appreciate a good human drummer, but let’s be real: when you want to achieve a level of pandemonium that will leave others in awe, we must look beyond human limitations. Everything is neatly rounded off by familiar guitars, bass, and vocals.

After the sci-fi, Cynic-meets-Igorrr breakcore intro track “Son Of The Morning Star”, everything decent just gets…jettisoned out the window. “Computer Kidz Unite” cannonballs into the pools that the previous track only dipped its toe into. Terror-inducing blast beats, intense guitars, and clashing electronics meld together into a jagged, uncomfortable mess. But a fun mess! Like my recent musical proclivities, it’s uninhibited, menacing, and wild.

However messy things may seem, each song has its own angle or variance of textures which make the 22-minute album rocket by. “Synthetic City” is a fave, as it sounds a living, though not exactly organically, city or structure as the name implies. Bursts of energy plow into the mix with no warning, the cold drums sound like a death march, and if you listen closely when the music drops out for a split second, you can hear the classic NES-era Konami game pause jingle – you know, back when they still made video games and not pachinko machines (I think you can also hear other altered sounds like the 1up sound effect from Castlevania, but don’t quote me).

*Please be warned: there’s some flashing imagery in this video, so epileptics tread lightly*

“Puzzle Room” is an ambient powerhouse with shimmering synths and a bit of a darkwave approach to it, but it still retains those unassailable breakcore drums and a haunting demeanor, because who doesn’t feel a little scared when you’re faced with a puzzle room in a game? “H3LLW0RLD_” is like robot war, with each side just getting plastered onto the wall, black and oily robot blood everywhere. Cybernetic whirs, beating drums, and dissonant guitars all slice across your ears in a bid to do as much damage as possible. I’m glad it’s a single because that means you can listen to it right now (assuming you’re reading this before the album drops) and really let the fury envelope you. It’s a very strong song.

I’ve gone this far without touching on the vocals. They’re not terribly special, and other elements in every song will likely be more attention-grabbing than them by nature, but they do fit along with everything else going on. Whether serene and comparatively clean like they are in the intro track or “Mirror Maze”, or absolutely bastard hard like on…well, almost any other track, the vile and occasionally masked harsh vocals are the nails in the cake…that’s also made of nails. I couldn’t decipher much of the lyrics, but with music like this, it’s probably best to just give in to the mood and vibe along with it. Release your inner cavepal, jump ahead in time a few hundred-thousand centuries where only machines dwell, and have a ball.

ZOMBIESHARK! are a little hard to nail down. They’re merchants of mayhem, directors of disarray, and captains of commotion, all achieved with unwieldy and unfeeling power that seems to sow nothing but utter destruction. It’s a jackhammer to your temples in the best way possible, and if you have a penchant for chaos like I do and are finding your normal heavy music a little too formulaic, I’d highly encourage surfing the brutal webs that these two have woven. Just beware, listening to this album may cause you to destroy everything you own.