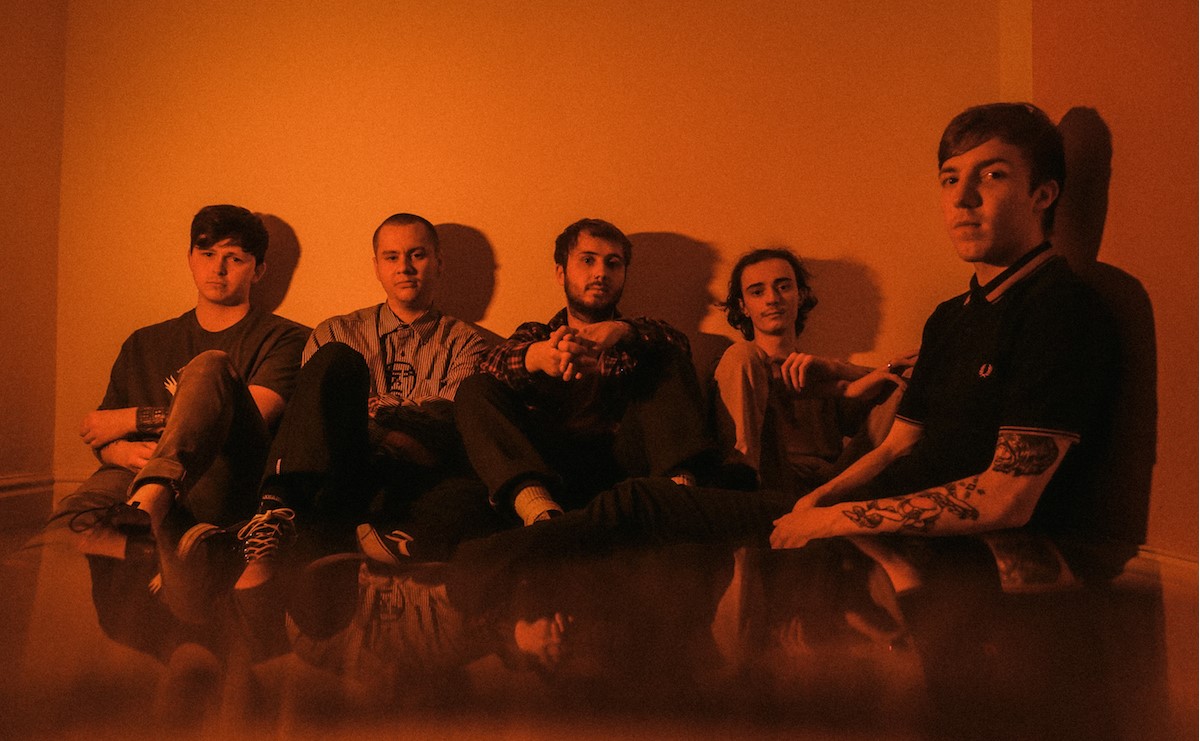 By Shaun MilliganJuly 7, 2020 No Comments

As distorted as it is disgruntled and determined, Staring At The Sun is an impressive debut LP, with the British post-hardcore outfit seeking bigger and better from both life and themselves.

In Shakespeare‘s Richard III, the character Gloucester says despairingly: ‘Now is the winter of our discontent.‘

Well, UK act Decay (not the Dutch band of the same name) are seemingly out to prolong the seasonal duration of that sentiment, if their summer debut Staring At The Sun is anything to go by. It’s not totally devoid of positivity, but the album, which continues a trajectory started with 2019 EP Modern Conversation, does feel as though it’s a construction of the hands (and very bones) of emotionally spent individuals. The quintet really have poured all of themselves into Staring At The Sun – artistically and experientially – and it all adds to the sense of home-grown charm.

Home-grown in this case being Liverpool, a vibrantly colourful culture point in the north of England. The city’s more renowned musical connections range from Loathe to that particular world-dominating group from the ’60s. These and others prove its ripeness for nurturing musical promise, and Decay have taken this ingrained pedigree and combined it wonderfully with the musical influences of acts such as Title Fight and Citizen.

The directly conflicting natures communicated in the band’s music are all too apparent, as the title track kicks the LP off. Much like this album, the sun is a thing of beauty to behold, but staring at it a moment too long can have a devastating impact. Single “Comfortable”, along with most of this charged debut (save for the temporary serenity of “Endless Silence”), commits itself as a marker of the realities we can struggle with and the potential strength obtained through said struggles.

As vocalist Daniel Reposar stated, ‘The record is a reflection of our everyday lives in and out of the band and is something I hope a lot of people resonate with‘. It’s all here: grit, grief, growth. The good, the bad, the ugly. What’s overwhelmingly apparent is the album’s authenticity, from the grungy fullness of the guitar to the reliable canter of the drums across its largely mid-tempo tracks. When the rhythmic sections do break loose, the drums and bass don’t disappoint, instead injecting a fervour that matches the characterful guitars and vocal work.

Listening in places is akin to reliving the outbreak of an early career Lower Than Atlantis. “September 27th” and “Empty Feelings” are prime examples, with that combination of disfigured chord patterns and the endearingly angsty throwing of sentimental, melodious hooks. You know – the kind that scratch the throat in the same manner one anticipates they would when being chanted back by a live crowd. They’re emotive and raw, without ever feeling overwrought. Also worth signposting are “Ache” and “Misery”, which chime in with an increased vocal aggression that will sit comfortably with fans of A Day To Remember.

“23” is a strikingly different closer for the record, allowing the stylish personality of their regional accent to fully shine through in the vocals, greatly enhancing the song’s appeal. While listening, it struck me that across the ten tracks, Staring At The Sun (albeit by probable coincidence) snapshots other notable British bands that also begin with the letter D. For example, it professes the musically chipper yet contrastingly melancholic vocals of Fools And Worthless Liars-era Deaf Havana. It gifts the thick guitar tones of Decade, and the generous helping of close harmony work pedalled by Press To Meco. Damn, I thought I had something there.

Decay are currently formulating an action plan to get this record into live venues as soon as guidelines allow, and in my humble opinion, it can’t come soon enough. As enjoyably dishevelled and energetic an experience as Staring At The Sun is to the ears alone, I am convinced that before a live audience is where such a strong full-length debut – as well as the talented folks behind it – truly belong. Keep your eyes fixed on this one, even if it does blind you.