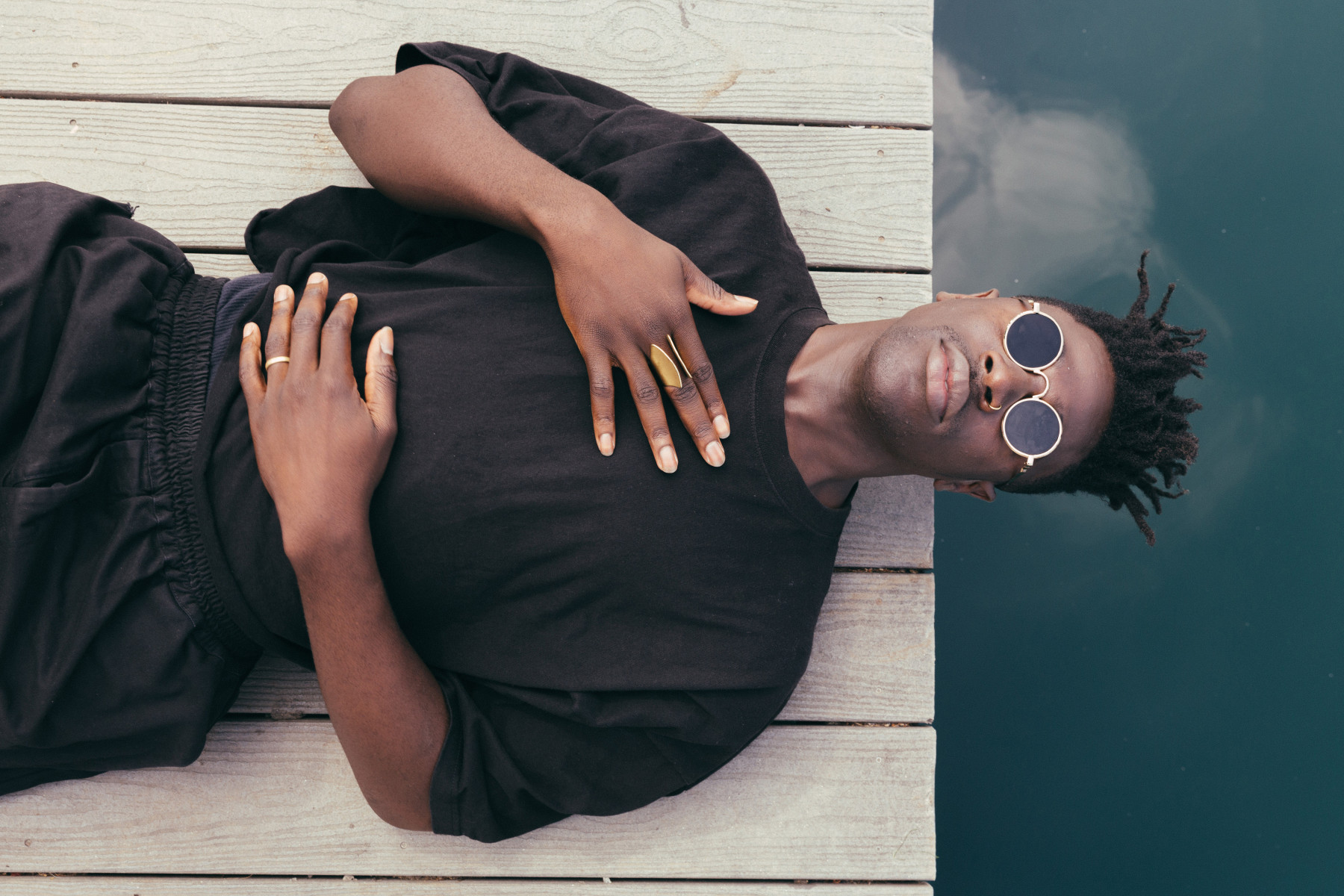 By David RodriguezMarch 22, 2020 No Comments

It’s no surprise Moses Sumney‘s next album is off to a stirring and eloquent start, and even still we are floored by its artistry and boldness.

Moses Sumney. What are we going to do with you? He so effortlessly makes music that can’t easily take a throne due to the fact that it refuses to take any one form, but perhaps that’s a fault of us. In an interview with The Guardian, he does entertain the thought of classifying his work – something he calls a ‘deep cultural flaw‘ for the sake of comfort, not to mention how racist it can be to box black singers like him into the R&B genre – saying it’s ‘an amalgamation of soul, jazz, folk and experimental indie rock‘, but it’s not the definition that’s important, it’s the experience. Today, our editor-in-chief Dominik and I share our experiences with the first part of græ, the next album from the Brooklyn creative, and how it only further solidifies him as one of the most important musical voices of this generation.

Moses Sumney? More like Moses Sumbae – seriously, the aftermath of his 2017 début album Aromanticism has seen the son of two Ghanaian immigrants become an indie darling at a speed that would’ve given a lesser artist not only a serious case of vertigo, but also a long-lasting bout with performance anxiety in the face of this newfound acclaim. Not Sumney, though – if anything, the pressure cracked his creative shell wide open, allowing his hitherto deliberately demure artistry to become less insular and minimalistic.

Perhaps it’s ironic, then, that græ opens with “insula”, a short introduction discussing the etymological origins of the word ‘isolation’, namely the eponymous Latin term for island. Sumney, together with a sizable roster of handpicked collaborators – including Thundercat, Daniel Lopatin (Oneohtrix Point Never), FKJ, and Taiye Selasi – has released his sound from Aromanticism’s disconnected state of perpetual, longing aloneness and placed it in a more worldly, vivacious context.

Even so, his eclectic art pop remains painfully intimate, as we are soon to learn; it merely deals in grander gestures this time around. The picturesque horn arrangements of “Cut Me” and “Colouour”, the dramatic strings that carry “In Bloom” to its conclusion, the dancing guitar lines and bouncy percussion in “Neither/Nor” – they all enhance or effectively counterpoint the inherently fragile nature of Sumney’s music. Amidst all these innovations, a quintessential Aromanticism-era number like the gentle contemplation of polyamory that is “Polly” almost feels like a fleeting memory, a cherished keepsake from simpler times.

These lyrics, taken from the song “also also also and and and”, present a good chance to grasp one of the main overarching themes Sumney devotes himself to on this album. græ is a defiant rejection of traditionally held binary views, a musical exploration of finding yourself falling between (or completely outside of) established narrow-minded societal extremes. Your identity doesn’t have to be either/or anymore; sexuality, gender, and character aren’t contained by outdated, rigid norms. They’re fluid. His own multiplicity can be witnessed throughout Sumney’s entire being – his art, his impeccable style, and his demeanor.

Another crucial lyrical element is (toxic) masculinity, as brilliantly dissected in “Virile” and its music video. In it, Sumney displays his own (perceived) virility and sexuality as a product, showing off his imposing physique in a meat-processing warehouse, all while his lyrics ponder the potentially damaging expectations of ideal masculinity imposed on men by society. Here’s a question: what is this seemingly desirable masculinity even worth in an age where many men begin to reject some of its harmful implications, and where women are encouraged to claim certain aspects of it for themselves? After all, as Sumney and Jill Scott express in the song “jill/jack”, ‘She had that masculine thing down/Shoulders and back straight/Never slumping, never round’.

Frankly, I am awestruck: this is but the first half of græ, and it already contains such a wealth of beauty and meaning that I could go on for another handful of paragraphs without even barely reaching the bottom of the well. What an intoxicating marriage of sound and purpose! What a gorgeous piece of self-realization! The way Moses Sumney translates his ideas of identity and multiplicity into music is nothing short of inspiring. Sure, you can continue viewing the world as either black or white, but it’s the græ areas where the sublime becomes tangible.

The lead up to græ has been a very generous one. Moses Sumney released a few tracks from it, including one that’s on Part 2, and they all showed the enigmatic singer in different lanes. Though none betrayed the things you could expect, like his adored falsetto, the varying modes all pointed to this album being markedly different from Aromanticism. Jazz and more experimental elements creep in like a partner returning to your shared bed after a long night out, and while this is embraced in more of an upbeat way than you may expect on some songs, it doesn’t change the pensive and poignant approach that Sumney is so studiously a master of.

This is how we get musical touchstones, everyone. By design and conscious choice, Sumney evades any and all classifications that pertain to genre or any one sound (or two…or three). The beauty of Sumney’s music is its complexity. Sure, this – along with most other music – can easy fade to the background of your day, but it’s endlessly rewarding when you listen intently, engaging with it like a deep conversation with a lover. Are you simply hearing the fluttering and emotive guitar and staccato bass of “In Bloom”, or are you taking in the cradling atmosphere of it, listening to the crooning of the 28-year-old as he longs for fulfilling platonic relationships? Does the angelic bombast of “Virile” just strike a rhythm in you to dance, or do you hear its calm critique of masculinity in the face of societal expectations of fitting in?

‘You wanna slip right in
Amp up the masculine
You’ve got the wrong idea, son
Dear son, we pick our own prisons‘

The video for “Virile” is a monolith of expression in and of itself with Sumney’s statuesque (and very attractive) frame dancing and flowing about a meat plant, a subtext that may get a little less subtle the more you think about it. He’s always been a performative person in the artistic sense – he seems to have great creative control of his music and all associated media. It’s his prerogative to show us his mind in this manner, and we are all richer for it. When he cries on camera in the static video for “Polly”, you feel compelled to cry yourself, to allow yourself to feel, to be as rebellious as you would be for bothering to show emotion. The simplest expressions can be the most defiant and declarative.

Identity and definition are key themes throughout as well, coloring the lines of songs line “Conveyor” and “Gagarin”, even more so on the interludes “boxes” and “jack/jill”, the latter of which has spoken word from Jill Scott. Though much like with Aromanticism, Sumney’s sympathy toward nontraditional love feel very mature and nuanced here. He laments about a difficult polyamorous situation on “Polly”. He advocates for freely showing affection to friends, unchaining it from the confines of romantic relationships. In that regard, it’s as if græ is reaching out to me, placing its warm hand on mine, granting me a sense of tranquility that I don’t get anywhere else, yet equally capable of stirring me up, sending a chill racing down my spine like a bead of ice water. A fine mix of anesthetizing and climactic – the gray between the black and white.

It’s with no reservation that I write this: Moses Sumney is the future of music as we know it. It’s so exhilarating to see an artist – a true artist – only concerned with honesty, gentle yet confident confrontation of norms, and to sound phenomenally good while doing it. I feel understood by this music, as if it were made for me by a muse who wishes to bring me comfort and validate my own feelings. My jaw drops at the fact that this is just the first part of this album, yet my mouth waters in anticipation of what’s to come. Regardless, Sumney is irrefutably an authority of emotion and makes me believe in things I long thought past my time. So far, græ is transformative and affirming in an ethereal, massively inspiring manner.