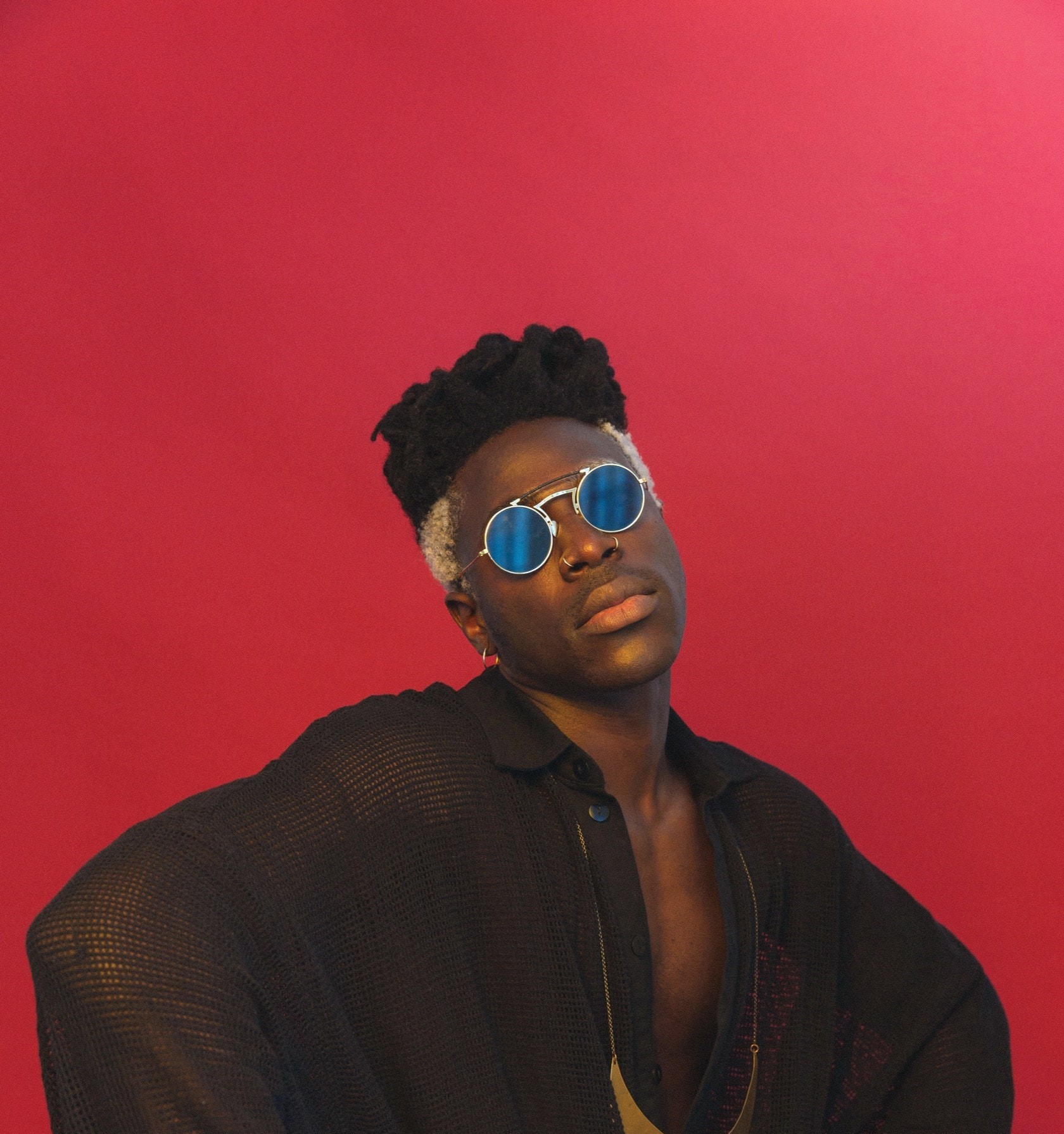 With grae: Part 2, Moses Sumney takes a step back musically to uncover a new wealth of emotional expression.

Two months ago, my fellow EIN editor David and I were lucky enough to get to review the first half of Moses Sumney‘s new album græ. It was without the shadow of a doubt one of the best musical experiences either of us had this year so far, which is why we were stoked to be presented with the opportunity to come back for a second part, græcefully tag-teaming our way through the project’s previously unreleased final portion. Read up on our earlier thoughts by following the link above; without further ado, here’s græ: Part 2!

Moses Sumney only asks a couple things of you; chiefly among those is to understand the prominent grey between the black and white. Love is grey, life is grey – nuance exists, along with it profound beauty, pain, and everything in between. This is a concept that’s reinforced with the second part of græ, an album that is now very firmly my favorite of the year, full stop.

Of course, this is nothing new to Sumney. He’s found so much success traversing the spectrum between the binaries we’re often presented with. Think about how we learned about love or gender. Affection is reserved for mates, those you romantically love, especially if you’re male. Gender is often restricted to a binary of male or female – just look at nearly any official form you fill out, the gender options overwhelmingly favor it. We have since grown to know better, breaking free of those stringent, invalidating, and harmfully reductive notions of those things and many more. In that freedom, we’ve found boundless and joyful expression for ourselves and toward each other. Moses Sumney revels in this. Even the lyric booklet for the album, which is graciously available for free online, travels from black to white to black again as you read through it, solidifying the fact that grey is that which this album lives and dies by.

Time almost stands still when I listen to græ, until it doesn’t and I realize I just looped it four times in a zen-like state. Through Part 2, we get more serene Sumney, calling back to his more sparse output on Aromanticism. His falsetto pricks at my back and instrumental arrangements bathe me in warm light. It’s ASMR for the soul if you allow his voice to simply become another instrument. Feather-light it might be, yet I still melt away under all its weight.

After all is said and done, græ does feel in part like a progression from Aromanticism, as much as it is an artistic evolution toward something else. Sumney charmingly laments at his fate to love and lose, one seemingly not occurring without the other. “Me in 20 Years” approaches it almost matter-of-factly; not so much blue, but grey, examining circumstance honestly without dwelling in the pain too long. This cyclical loneliness is more or less embraced in various ways throughout græ. Still, I can’t help but interpret the lyrics as thinly-cloaked, stinging admissions against growing swells of synths:

‘Hey, me in twenty years
Does your milk still
Turn to rot too soon?
Do you still hoard souvenirs
And make them mirrors
Of sentimental veneer?’

Nearly every song has a couple to a few lines that cut – deep – yet Sumney’s beaming falsetto never falters. The emotion of it all comes in the context, though that is not to say his voice and complete command of it doesn’t almost reduce me to tears itself. Even in hopeful moments like “Keeps Me Alive”, I’m overwhelmed with the notion that things will get better, pleased at the thought of a personal nirvana being within reach. I, too, can be happier, be better? græ makes me believe. I imagine this must be what submission to a higher power feels like.

Also, can I please just take a minute to highlight the opening verse to Part 2 within “Two Dogs”, one that made me laugh and nod knowingly?

Really, that says it all about græ, and much of Moses Sumney as an artist. Vivid description made of pointed observation, the kind made obvious like we should have known all along. Sumney acts as a keeper of a succinct, poetic knowledge, emotionally intelligent and sentimental without a hint of heavy-handedness. In that balance, græ is almost eternal, a marvel of the senses; the result of surreal skill and unbridled splendor.

In all honesty, I can say I found Part 1 more enthralling to me with its bold surprises, but Part 2 is familiar, even more conversational and perceptive than before. Which is better? That discussion is now mostly moot. græ, clearly and utterly, is a complete project – two sides of the same glorious coin, a comfort as well as an expedition into a soulful unknown. With Part 1, I called græ ‘transformative and affirming in an ethereal, massively inspiring manner.’ With Part 2, consider that duly confirmed.

The wait for it has been excruciating, but it’s finally here. Moses Sumney has revealed the full scope of his græ project, and I couldn’t be any more excited to get another shot at reviewing it. To my surprise, Sumney presents himself closer to the subdued demeanor he adopted for Aromanticism throughout the album’s final eight songs.

Thus, the second part of græ establishes an interesting duality – if the first half was the grand, orgiastic stage play, then this is the comedown and the aftermath behind the curtain; or, in case you’d like to keep with Sumney’s themes of sexuality, then part one was the sex, the orgasm, the final grandiose realization of human connection and togetherness, while this second part is the afterglow, arguably even more intimate and vulnerable in its clear-minded yet still endorphin-hazed side-by-side of two humans that mere moments before were merged into one. Either way you choose to look at it, you’re always presented with two inextricably linked sides of the same medallion when interacting with græ, its soft, thematically intricate contrast enhancing the overall experience rather that derailing it.

Anticipated by Part 1’s final track “Polly”, this shift in musical direction isn’t exactly radical, but still significant. Toning down some of the album’s earlier, more beat-heavy and bombastic tendencies, these tracks instead embrace anew a gentle ambient glow. Electronic sounds and folksy elements take center stage, while the use of auxiliary instrumentation like horns, woodwinds, and strings has been relegated to the background; together, these songwriting choices create a lush tapestry for Sumney’s angelic voice to flourish on. The songs’ building blocks remain the same, but everything has taken a sharp turn towards the ethereal and introverted.

Likewise, the lyrical themes Sumney chose for this portion of the album see him redirect his focus decidedly inwards, although there are still grander implications at play. Of course, there are the familiar Aromanticism touchstones of love and isolation – single “Me In 20 Years” depicts the painful sting of loneliness and the yearning chasm of lost love especially well – but we also see Sumney grappling with topics such as mortality, morality, and facing expectations (both within an intimate relationship and as an artist). These I find to be just a tad more engaging; much like the social commentary of græ’s first part, they provide a suspenseful counterweight to his otherwise aloof interpersonal ruminations.

Not only are these themes each individually handled with the utmost grace, they’re also woven into one another with astounding suppleness. For example, “Two Dogs” is an anecdote revolving around two dogs that came into Sumney’s life in 2004, which he uses to touch on mortality and the inherent damaging potential of things we might see as beneficial: ‘Strange how what heals can also kill’ – perhaps even a comment on love itself? It doesn’t end there, though; Sumney manages to tie this whole thematic complex back into his ongoing discussion of the aromantic nature of his own life, with a single question no less: ‘Have you ever at least loved a pet?’

It’s within these lines, taken from the following song “Bystanders”, that Sumney lays himself bare once again, not as a lover embroiled in an intimate relationship or the dolorous memories thereof, but as an artist. He struggles with his own honesty and candor in the face of an audience who’s eager to watch as he dissects his personal life for their enjoyment, judging him without reciprocating the gesture. There’s nothing in it for him but empty praise from a morally grey, amorphous mass of people; ‘don’t waste your candor on bystanders/they’ll watch you waste, waste, waste, waste away,’ he sings, and yet he continues to give and give relentlessly, because that’s what his art demands of him. Obviously the tumultuous relationship between artist, art, and audience is another one of the grey areas Sumney dedicated græ to.

If I may resurrect an image I’ve used earlier, I’d like to add that a much more meta look behind the græ curtain comes with the interlude “and so I come to isolation”, which ties the album’s arc about isolation together by referencing back to its opening, “insula”, explaining how the latter’s discussion of the etymological stem of the word became an integral driving force of this creative project. A seemingly innocuous inquiry about the pronunciation of a foreign word (‘isolanda’, Portuguese for – you guessed it – isolated) leads him to a moment of self-realization: ‘And I thought, that’s exactly what I’ve been my whole life – I’ve been islanded’. Let that sink in: this little moment, which for others would’ve ended with a ‘huh, neat’ and no further thought, led Sumney down an entire creative path and closer to himself.

Two songs later, I’m rendered utterly speechless once more. I’ve had all of my expectations shattered before my eyes, save for one – arguably the biggest of them: that Moses Sumney would bring græ to a breathtaking conclusion. That much I actually got right. What I did not anticipate was that he would shift the focus so drastically without losing touch with the overall concept of the record. As a whole, græ is a testament to Sumney’s vision and capabilities, a gorgeous convergence of art and purpose. It went further than Aromanticism ever dared to, both in- and outwards, and I’m willing to give Sumney nigh-endless credit for his honesty and artistic bravery.

One question remains unanswered in my head, however: with all of the grey areas of his life thoroughly accounted for, where could this man possibly go with his work from here on out? After all, he tied up more loose ends than he created with græ. That’s an inherent danger of ambitious projects such as this: robbing yourself of future creative potential. And yet, I feel like my worries are ultimately unfounded. Sumney has never failed to surprise his audience thus far, and I’m under the impression that he doesn’t intend to start letting up any time soon.