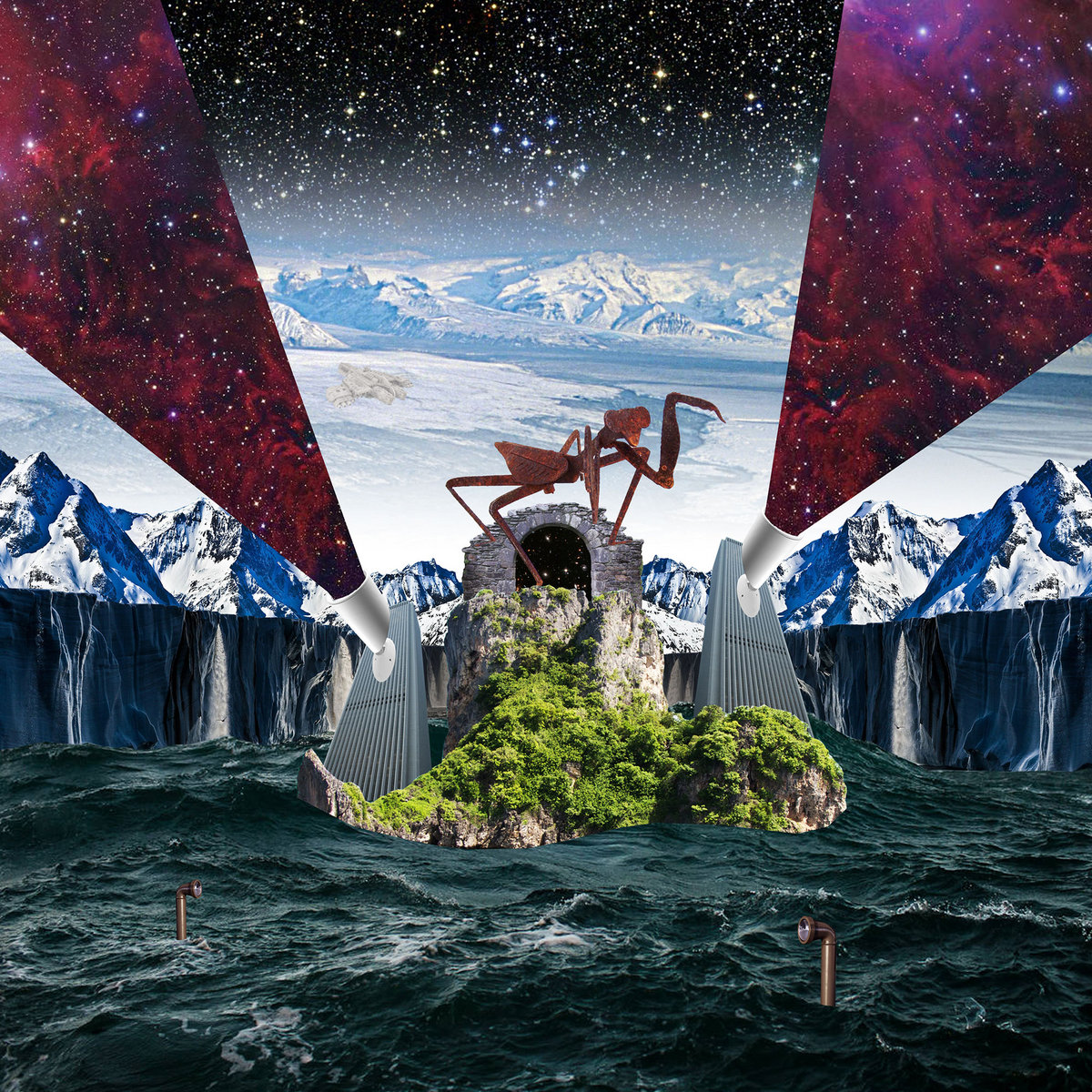 Taking influence from, uh…everything, Cursed Mantis show there’s still plenty of ridiculousness and eclecticism to drudge up from the mines of heavy music. And cheese. Lots of cheese.

Hey, what do cheese and this album have in common? A lot. Maybe too much.

Y’all know who (dj) Skull Vomit is? I heard his Deadly Observation EP a couple years ago and loved how wild and subversive it was, simply by smashing together elements of metal and breakcore like two trains crashing head-on. This wasn’t the first time a combination of this kind would happen (Igorrr, anyone?), and it definitely wouldn’t be the last. Enter Cursed Mantis…just a coincidence?

Cursed Mantis are made up of a couple different people/artists. Gloom Influx (GLMNFLX), a glitchy, heavy, industrial electronic artist from Quebec (think Hollywood Burns meets The Algorithm, but their instruments and computers are on fire); The Toilet, an artist self-described as ‘fuck shit hell grind break disco plunderphonics‘; and Alojla, a Swedish singer who features on some of Gloom Influx‘s stuff as well as other heavy, dark synthwave artists like SurgeryHead. What the hell could all of these people unite to create? Probably the most unique album you’ll hear this year.

Granted, ‘unique’ doesn’t always mean it’s good, but in this case, it very much means that. It’s not for everyone – hell, it may not be for anyone – but I love it. Cursed Mantis, subtitled The Search For Cheese In Space, sub-subtitled A Synthgrind Opera in 19 Acts is not something made to be taken seriously in the traditional sense, and that’s good, because Cursed Mantis aren’t taking it seriously either – they’re having a fucking ball though. Some might say…a cheese ball. Utz brand if I may be so discerning.

Anyway, this album is in fact an opera, telling the story of a cursed mantis race from space doomed to sustain on only cheese…from space. Apparently, cheese isn’t native to the mantis homeworld, so away they go on an intergalactic journey to find cheese…in space. You’d think this would be a keen opportunity to test the theory of our own planet’s moon being made of cheese, but nope, mantises are far, far away from our general vicinity. Still, as the lyrics says, they look, ‘searching, looking, scanning, snooping‘ until they…well, I won’t give it away. Let’s focus instead on the sonic accompaniment because it is something.

‘Synthgrind‘ is the descriptor bestowed upon it in the sub-subtitle and it’s as apt as any other you could conceive. Primarily, it’s just eclectic; an iconoclast among music that doesn’t seem to care about its classification, only the results. Based on that alone, Everything Is Noise is thrilled it exists – nothing worth looking into should come easy, and vice versa. The songs here drift somewhere around a minute for the most part, and it was Cursed Mantis‘ job to make sure that there’s more movements and change-ups in single songs than in some bands’ entire LPs. One second, you’re treated to a turbo metal dance-fight, the next might sound like a hacked Genesis video game, the intro to the next big synthwave hit, or cybernetic orchestral dirges. Moods change quick, all while Alojla sings very cleanly and competently and The Toilet snarls and squeals like…well, a toilet, backed up from too much cheese feces (cheeces?). The two often work in harmony, Alojla functioning more as a narrator of sorts and The Toilet voicing more of the mantises’ inner, and outer, thoughts (if mantises squealed like pigs anyway).

“Cheesy Curse” has a chiptune bounce intro that polymorphs into a rabid grindcore extravaganza. “Monday Morning” synthwaves itself into your ears only to do the same thing later on by scorching the earth with 200+ BPM drums and scathing guitars. Why? Because Cursed Mantis could. Thing is, it works so well. The two-tiered vocals, the rampant disregard for tempo stability, the off-kilter and Ziltoidian humor – it’s evocative of the wildest, most surreal plots found in cartoons from decades past, the kind that were probably a little too violent or suggestive for kids, but we watched anyway and turned out totally fine, right?

Elusive music like this is always uncannily spoken about. How do you describe it? It never feels right, even if it’s your job to do so. It’s always a cop out to say ‘just listen to it’, but some things are truly better experienced than described. Cursed Mantis is something that’s going to be keenly loved by people with a penchant for the outrageous; those that want to see boundaries not only pushed, but ran over with a space-age hovercraft, then pulverized with a subsequent top speed reversal. Those that love cheese. Cursed Mantis will not be loved by…lactose intolerant people, entomophobics, or those that don’t have time for bullshitting in music. Their loss.

If absolutely nothing else, you must appreciate Cursed Mantis‘ attitude and how they don’t seem to care to construct anything this side of conventional. What a band. What an album. Throughout the journey of the space-faring mantises, cheese may have been the goal and the only thing that would fill their insectoid tummies, but the real cheese was the friends we made along the way. Right?