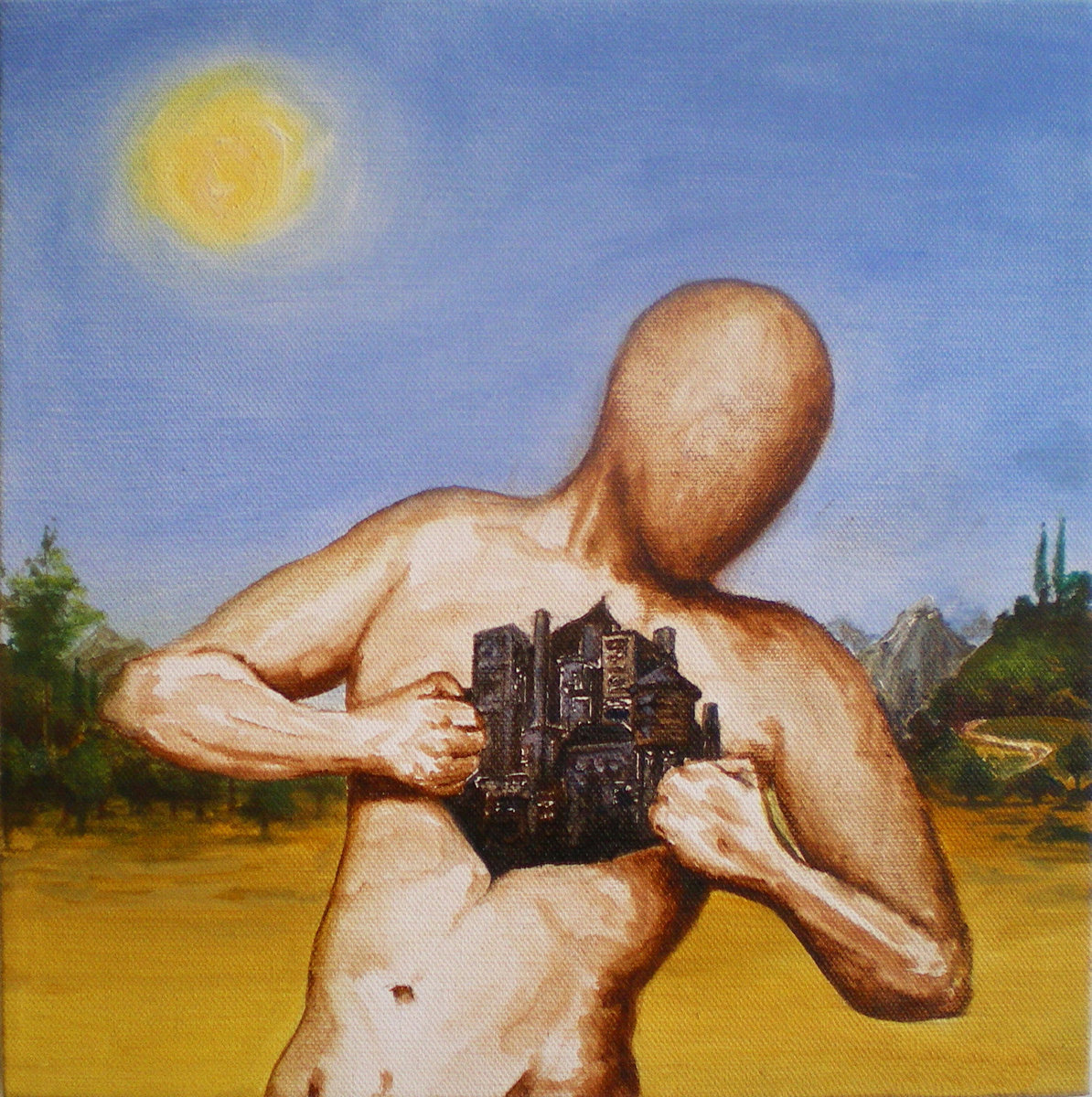 A SCENE IN RETROSPECT: The Gabriel Construct – “Interior City”

I’ll say it right away – Interior City might be one of the most revered records among the Everything Is Noise staff. Beginning with our PR manager Inter (who sadly had to skip out on this episode for personal reasons) proselytizing all newcomers to the wonders of The Gabriel Construct, this album slowly began to seep into the very foundation of our shared interests. Today, more than seven years after its release, we finally managed to find a way to dedicate an entire article to this unifying, irreplacable piece of progressive music.

You don’t have to take my word for it, either – below, EIN editors David and Jake, as well as staff writer Tim, shed a light on why Interior City is a revelatory work of art, one you should pay close attention to if you’re at all into progressive rock and its adjacent styles.

To me, Interior City is a legendary record. It is the only record by The Gabriel Construct, and the most stunning work by mastermind Gabriel Riccio. Many call it progressive metal, but I have seen people point out influences ranging from minimalistic jazz to classic or avant-garde. It is so multifaceted that it would be simply offensive to classify it as anything. It is art, period.

But what makes this record so compelling? Starting from the fact that it’s a fluid record with a run-through concept, interesting lyrics, and stylistic choices not even in the periphery of most musicians, it’s simply different. Even after years of searching for a conclusive meaning of the concept, my search has bore no fruit, which is why I can only offer my own interpretation of this story.

The opening track “Arrival In A Distant Land”, starts with a minimalistic scenery and the already surprising vocal performance of Riccio. A solemn, isolated piano guides us through more than half the track, only sparsely singing into the distance. As the vocals come in, they’re gentle and somewhat defeated-sounding, setting up quite a dark and melancholic start to this journey. As the vocals then swell in volume, the operatic nature Riccio’s timbre is revealed, a crystal-clear yet singular-sounding voice, powerful in its fragile emotions. The lyrics seem to reflect the nature of one’s agreement to the misery to come when signing the contract for incarnation. A dystopian take on life.

The follow-up, “Ranting Prophet”, continues the gentle singing and piano in the beginning. As distorted guitar, fretless bass, drums, and the violin come in, the track swells to a kaleidoscopic cacophony enveloping the listener in a disorienting, intoxicating play of sound. Here we also get our first glimpse of some of the vocal effects used in the album later on, like flanger, chorus, and some echo.

What I like a lot about the vocals in Interior City is that they are used both as a means to convey the story but also as a separate instrument devoid of inherit meaning. This is best exemplified by the scat-esque performance in “Fear Of Humanity”, where the vocals harmonize with the other instruments and a guitar solo. This same song features one of my favorite lines: ‘I’m afraid of humans’. That line is later mirrored by ‘I’m afraid of tumors’, representing the city as a complex, malicious organism that feasts as on its citizens as much as the citizens feast on it. Something something George Orwell.

The paranoia and escapism presented here is even acknowledged in the song “Retreat Underground”. It features layered vocals and frantic, despair-laden instrumentation that features just a glimpse of hope in the ascending violin melody. Interestingly the track draws a reference to the Testament of Solomon in the line ‘lead me away from here Astaroth’, who is the baron of hell and is generally seen as connected to pestilence. This might represent a prayer for death, as that is a preferable option to the incarceration in a mortal vessel.

“Reatreat Underground” is followed by the cynical “Subway Dwellers”, which sees humanity replaced by ‘them’, faceless, lifeless figures stuck in a routine. While the temperament is significantly warmer than the prior track, with a saxophone bringing a warm, metallic shimmer to the instrumentation, the lyrics are anything but. This is a theme that continues into the “Defense Highway” and the fast-paced “Inner Sanctum”.

The more our protagonist struggles and defends himself and his perceived freedom, even when talking directly about his struggles, the music is more upbeat and energetic. This to me feels like the struggler is only content with his life if his struggles are perceived as ‘just’ or ‘a worthy cause’.

The last two tracks, “Languishing in Lower Chakras” and “Curing Somatization”, make for an interesting end, as they are oxymoronic. “Languishing in Lower Chakras” is a sparsely filled ambient track with some abstracted field recordings and very short interpolation of piano notes. “Curing Somatization” on the other hand is frantic, violent – it’s probably the most dissonant track on the entire record. It is important to note that the track ends with the harmonization of all instruments and ultimately a major version of the chords from the very first track.

‘I’m afraid of humans.
I wonder if they’re afraid of me.’

I think by now we understand that ‘prog’ is a genre that isn’t necessarily progressive. At some point in the past few decades, ‘progressive’ rock and metal became crystalized by characteristics that mostly became widely accepted. Thankfully the true boundary-pushers still existed and kept making music that challenged norms and found new creative broad strokes and nuances to refine what progressive music could be. The Gabriel Construct is one such act that almost blurs this line with their only record, Interior City.

The Gabriel Construct’s majority shareholder is Gabriel Riccio, who composed the majority of the album and contributed in nearly every other aspect from instrumentation to solely handling the vocal duties. Guests joined to help fill out the sonic tapestry, with additional drumming from Travis Orbin and a host of other contributors playing saxophone, rain sticks, and even ‘additional laughter’. This is a record that is packed with instrumentation, transitions both jarring and smooth, and a narrative throughline with strong themes. For all that’s going on however, it never feels like a patchwork record that doesn’t know what it wants. The constants of Riccio’s voice and piano accompaniment guide the listener through this record with a sense purpose and as the songs pass  there’s a comfort to the melodic narration that it provides.

‘What have they placed inside my brain?’
I am called to their homing beacon.’

The entire record is a shining example of skillful compositional prowess and each player is a masters of their instrument. However, for me the most impressive thing about Interior City is the entrancing vocal performances and arrangements, and “Ranting Prophet” is the perfect showcase of this. The ease with which Riccio glides from quiet crooning to the summit of his range and back is incredibly captivating. Each word in each song is crystal clear, and that’s a boon to those who wish to follow the album’s clever story. From choral arrangements to Serj Tankian-esque shrills, it’s a goddamn vocal clinic that everyone should hear.

Interior City is a record that has always stuck with me since I was first introduced to it a few years ago by Inter, the PR Manager here at Everything Is Noise. On one hand it’s relaxing and on the other it’s maddeningly exhilarating. The cohesion of the vision from start to finish makes it one of the most special records I have ever heard. There’s also mountains of charm. And I don’t mean that in a demeaning way at all: it’s simply lightning in a bottle and what could be more charming than that. If you’ve not yet visited Interior City, consider this your personal invitation, it’s a trip worth taking.

I was lucky enough to be born into a home that raised me on classic progressive music. Delving into the hits of Pink Floyd, the abstract keyboard warfare of Emerson, Lake, and Palmer, spritzes of other gargantuan, legendary bands like RUSH and YES, I grew to be introduced to other bands like morose Porcupine Tree, the epic Coheed and Cambria, multifaceted Opeth, and transcendent Devin Townsend. In recent years, I’ve had the pleasure to learn of standouts like TesseracT, Caligula’s Horse, Kepler Ten, and Lonely Robot.

Years and years of being exposed to the best of the best – the biggest names of prog, all crafting music in their own way. It still does almost nothing to prepare you for what awaits with The Gabriel Construct, which manages to deliver a completely unique experience, and probably the greatest one I’ve ever had.

Interior City is such an engrossing experience, feeling alien enough to even make the more human aspects of it stand out. It’s the Twilight Zone of prog – melting cityscapes filled with a corrupted population, oppressive machines, creeping paranoia, and a dark palette are keenly expressed through perfectly positioned dissonance and unnerving melodies.

The first verse of “Ranting Prophet” sums it up best, almost as if doubling as a theatre chorus’ cries to preface the masterful story, the likes of which would make for a watershed science-fiction film:

‘Once you’re here, you’ll fall apart
Build a life – a work of art
There’s too much here to comprehend
Very soon, we all begin to
Pretend that we’re somewhere else’

This album is as good as it gets – unrivaled prog perfection. That’s all you need to know. You owe it to yourself to try it out.

What are your thoughts on/experiences with The Gabriel Construct and Interior City? Do you have any records you’d like to recommend for inclusion in A Scene In Retrospect? Leave it all in the comments if you feel like sharing!