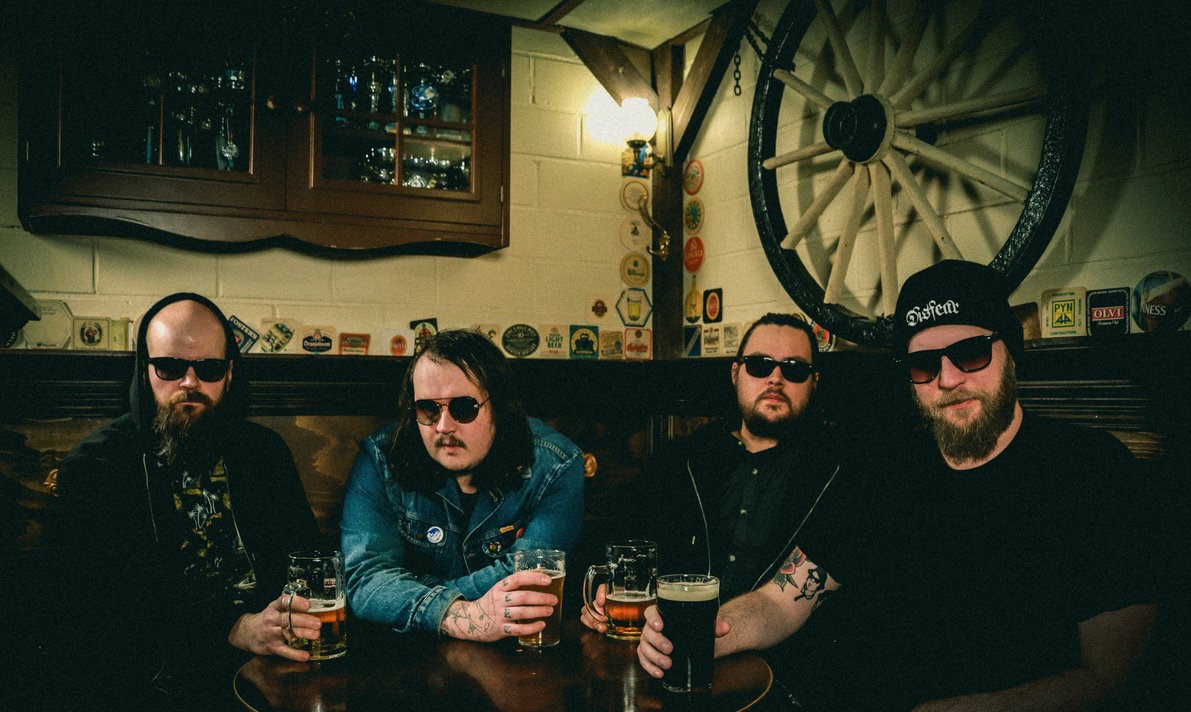 Demonic Death Judge blend elements of stoner doom, sludge, and psychedelic rock into a riff-filled good time on their new album, The Trail.

I like big stoner riffs. Big stoner riffs are good riffs. They make me smile, while also forcing my head to bob and my face to contort. If you also like big riffs, check out Demonic Death Judge’s new album, The Trail. It’s the Finnish quartet’s sixth full-length release, and it’s a ripper, full of unexpected twists, groove, and, of course, riffs.

A lot of The Trail is classic, blues worshipping stoner metal, drenched in distortion, embellished by lead lines with too much wah, backed by fat drums and the classic, crunchy fuzz bass. But Demonic Death Judge are just a little bit different. First off, like a lot of more modern stoner metal, the album no longer sounds like it was recorded in a room so filled with smoke that the microphones lost the ability to pick up high frequencies. The attitude is still the same – it still sounds, for the most part, like a bunch of dudes jamming in a garage, but the garage is also a pretty decent recording studio, and so we get that lovely sizzle from the cymbals, sitting at the top of the clear, punchy mix. There are moments when I’m not entirely sure the mix is perfect – some very odd vocal panning, tones that are on the cusp of too extreme, and a hi-hat that dominates a bit too much for my taste, but overall, it’s pretty on point.

Secondly, much as we all love the classic stoner doom vocals of Sleep, Electric Wizard, and High On Fire, I’m sure we can agree that this vocal style has been done to death. The drawn-out, narrow melodies produced by vocal chords that are probably caked in cannabis resin by now – they work, they have their place, they’re charming, but they’re not interesting in this context any more. Demonic Death Judge turn away from this style, and, with eyes firmly on a sludgier sound, commit to almost completely harsh vocals. This is surprising, refreshing, and, for me, very welcome. I’m a sucker for any sort of screaming, and it’s just that extra bit of grit that’s needed to elevate the already sick riffs to ultimate badassery.

So we have this combination of sludge vocals and well-produced stoner doom riffery. That’s cool, but also not really anything new. Luckily for those among us not so easily satisfied, Demonic Death Judge throw us another curve ball with the addition of psychedelic rock elements – and I’m not just talking about clean guitars with a phaser and some delay (though that’s exactly what happens at the start of “Shapeshifting Serpents”). I’m talking expansive cosmic explorations, aided by bongos, drones, a saxophone, chanting, and drenched in every effect imaginable. Considering how earthy DDJ’s riffs are, this doesn’t seem like it should work, but it does, somehow.

I particularly dig the way the influence of psychedelia and sludge are blended on “Flood”. Starting out with an uncompromisingly crunchy tone and some damn fine stoner riffs, it progresses through all sorts of weird and wonderful situations. I adore the riffs, but I also enjoy when they give way to sparser sections; these have an ominous, intense atmosphere about them, the guitars almost detuned, and the tones uncharacteristically understated. The second one expands into an extensive psychedelic solo, the wah on the guitar almost inappropriate in quantity, but hey, that’s what you get when you combine two genres that worship this effect! As with a lot of this album, some of the tones verge on over the top, but they are just restrained enough to not tumble over the edge. There’s an especially questionable tone on the first guitar solo –  very synthy, squashed, and tubular, but it still works. The bass playing, especially in the chorus, is delightful – melodic under the ruthless vocals, the tone somehow both driven and absolutely lovely.

Despite some, in my opinion, questionable production decisions, The Trail is a very solid album. It manages to take unexpected turns while staying extremely coherent, weaving effortlessly between stoner doom, blues, sludge, and psychedelic rock. The guitar tones, while sometimes teetering on the edge of excessive, are varied and awesome sounding, the bass playing is consistently great, the vocal performance drips with attitude, and the drums provide a solid backbone for it all. If you want all the drug-infused fun of big, simple stoner doom riffs, but with extra grit and a generous sprinkle of kaleidoscopic psychedelia, The Trail is for you.