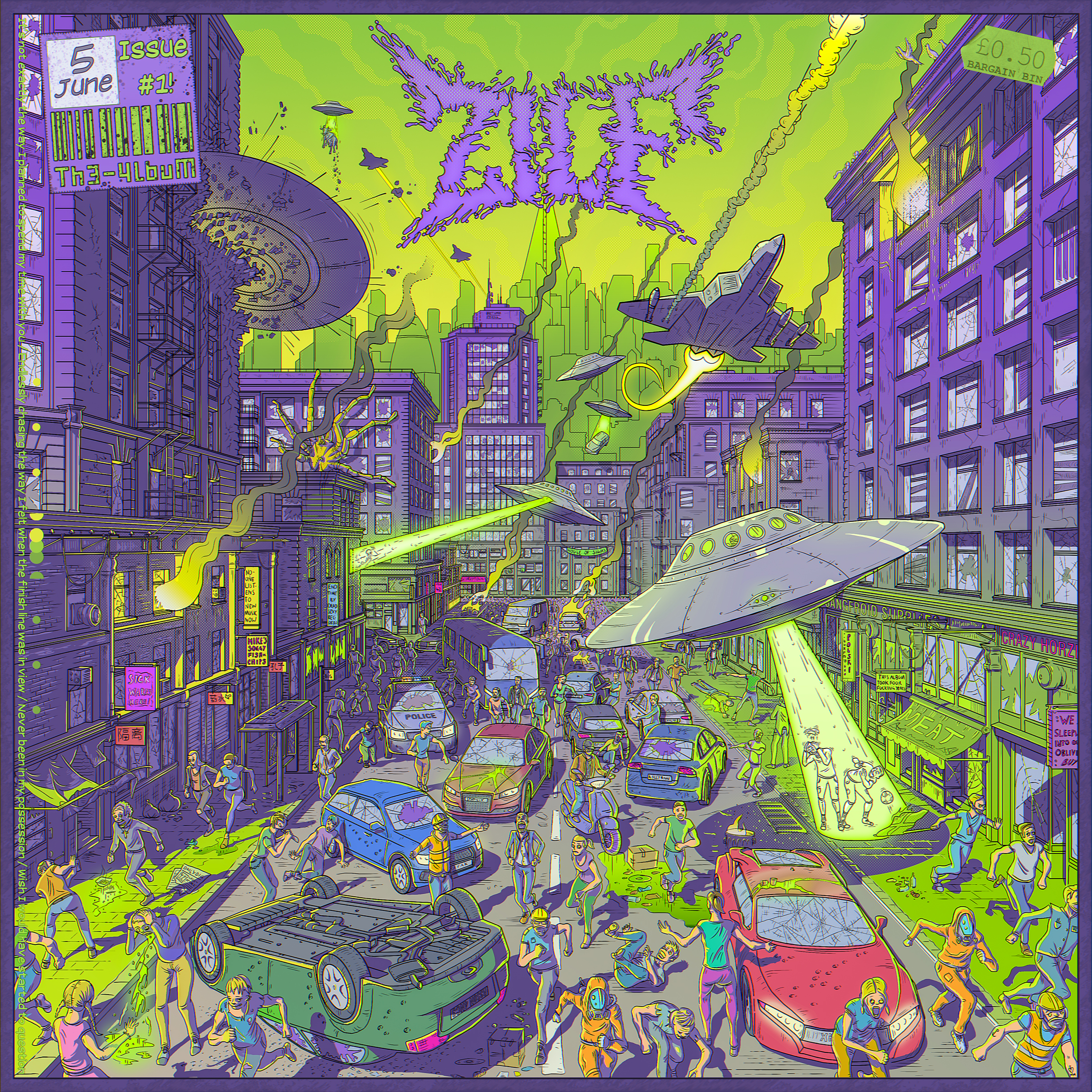 I use the word ‘wild’ a lot. It’s fun – it can accurately describe so much out there without falling into potentially problematic trappings words like ‘crazy’ have. It’s also a tad vague. Surely a word like ‘wild’ needs some…context, right? Some friends – fellow descriptors to properly convey the meaning intended. Is something wild as in feral or primal? Is it wild as in unchained, governed only by entropy? If anything, the album of focus today is more of the latter, and probably more, because ZILF are indeed wild.

For me, ZILF kind of came the hell out of nowhere. Described as ‘pure pop sludge anthems stolen from a UFO that crash-landed in the beautiful countryside of [REDACTED], UK.‘, it’s perhaps easy to see why. This particular situation doesn’t exactly happen often. Something like ZILF can be a flash in a pan, lightning in a bottle…a UFO crash-landing in [REDACTED], UK. What does their name mean? What does it stand for? Several listens of The Album don’t yield many answers, so we’re just going to have to enjoy it for what it is: chaos stitched together with supreme melody and more unhinged animation than a Jhonen Vasquez cartoon.

My own tastes allow me to gravitate toward music like this. Stuff that’s not nailed down by any one or two (or three) descriptors. Please, by all means, bands – just mash all the shit you want into an iridescent pearl of an album, just make it sound good. If music were cereal, ZILF would surely be the sugary brand all the kids want: multi-flavored, bold, and colorful with a sick-ass toy in every box. The kind parents audibly sigh at when their child grabs the family-size variant of and slam dunks it into their shopping cart like James Harden sans the beard, unless you have a really old child.

So, in addition to everything I’ve said, what else is ZILF like? Well, they weren’t kidding when they referred to their sound as ‘pop sludge anthems‘. They have a real knack for making catchy hooks and palpable riffs that drive verses, but it’s all built on a mathcore foundation with sizable donation of, uh… *leans in and whispers* djent tone. I’m sure you’ve heard your fair share of bands described in similar ways over the years – even on this very site – but digging in reveals that while this particular fruit has been thoroughly juiced, there’s some leftover pulp remnants that previous bands didn’t bother to grind down. Good thing I love pulp.

“Kayak”, one of The Album‘s singles, has a sing-songy chorus and rough, throaty lyrics in verses. It’s a little ditty on the hubris of man, and how even the well-intentioned (or not, depending on your opinion of Christian missionary work and religious imperialism) among us can get in way over our heads quick if you’re too foolish for your own good. It draws parallels – to the point of likely taking direct influence from – to the story of John Chau, the man who tried to locate (with the intention of spreading the gospel of Christ to) the Sentinelese people of the Andaman Sea, the ‘world’s most isolated‘ indigenous tribe, and summarily got his ass kicked. But don’t let that bring you down – the slamming and steadfast drums will whirl you into a frenzy along with the viscous, rampant guitars.

“Zef”, a deeper cut, deals with similarly daunting themes: dangerous envy. This hook, too, has mass appeal to it, dancing along to the guitar melody syllable by syllable in between manic, rapid-fire verses of trying to keep up with the Joneses. It’s here that ZILF‘s dueling vocals really get a chance to shine, as you’ll hear the duo (yes, this band is apparently just two dudes) trade off every word at certain points, building entire lyrical bars girder by girder with aggressively croaked glee and charmingly pronounced English accents. “RIP in Peace” is another grim tale, this time of an experiment gone wrong with zombie-like subjects escaping from their quarantine to wreak havoc upon the world. It’s a mess in more ways than one – the instrumentation is frantic, resembling a grinding death song the likes of which you’d expect from Collision (RIP, coincidentally). A verse in the middle is delivered with an cheerful, Elmo-like shrill that’s unlike anything else found on the album.

Really, when you get down to it, ZILF really separate themselves from the pack by being about as different as possible without doing it for that sake alone. Sure, it’s eclectic stuff, but that doesn’t mean much if it’s not substantive or at least flashy, and you get both here. “Sangfroid” is probably the most potent example, as it whiplashes from a swinging jingle to a powerful metal meltdown at a moment’s notice. I mean, there’s a damn kazoo solo near the end of it that practically tears at the seams of normalcy! It’s playful; orderly yet scattered, like a messy room that would stump others, but you just so happen to know where everything is – so don’t touch anything!

Hell, even when ZILF are riding more conventionally through their flurried funhouse of flailing sound, it’s still something to behold. A track like “Tarantula Hawk” may comparatively come off as vanilla with its structure and approach, but at least it’s fancy vanilla. It’s slower and more deliberate, allowing the vocals to shine a bit more than usual. Consider it a palate cleanser as you prepare to take on some water with how much The Album plans on thrashing you about in the following tracks.

The energy contained within is unrestrained. ZILF are a menace to uniformity, opting to do whatever they want, whenever they want, while keeping everything pretty and presentable. Joining the ranks of a couple other notable albums, this is among the most fun I’ve had with heavy music this year. It’s a careening roller coaster that scrambles your brains, maybe adjusts your spine a tinge, but never derails. Housed within is a vibe fans of the short-lived but similarly diverse and fun band Cyborg Octopus will indubitably take to. More broadly, if you’re a fan of the Mike Pattons of the world who like to challenge the attention spans of audiences with a motley of mirthful music, or of metal when it bothers to break free from the molds set by those before – or if you’re just a fan of wild music – this is The Album for you.