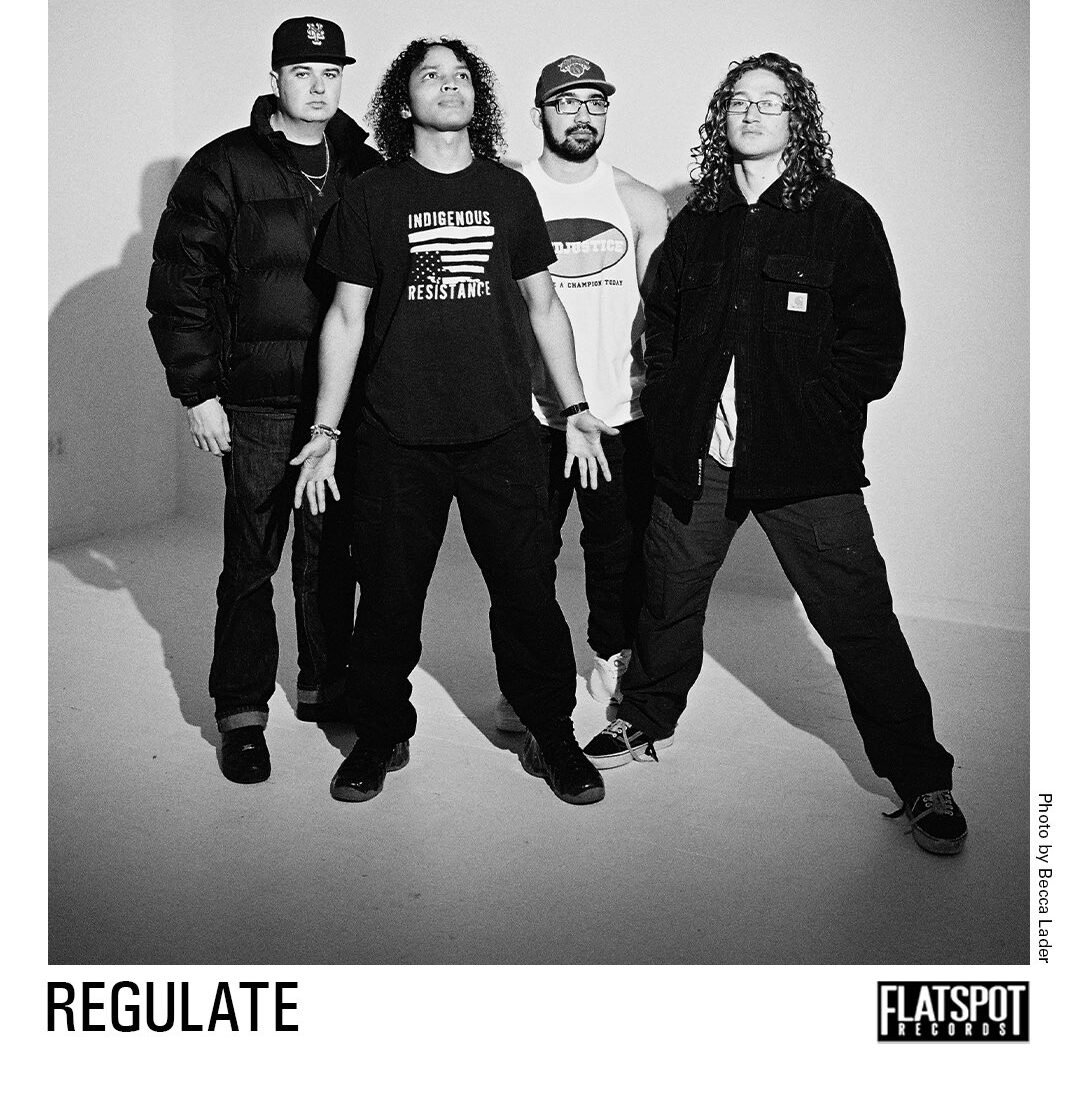 By David RodriguezOctober 26, 2022 No Comments

Regulate have venom for those that deserve it and flowers for the rest of us, proving that the future of hardcore will have an abundance of one thing: compassion.

So long I’ve chased the heaviest and wildest music out there that other things get lost in the mix. I’ve spent the last several years becoming a more compassionate and empathetic person, listening to others’ perspectives in how they live their truth, what troubles them individually all the way back to countless generations before, and, more importantly, the myriad of ways we can help out now to break the cycles of oppression and trauma. It’s not easy, no one ever said it would be, and it’s always great when bands are willing to address that head-on. This is why a band like Regulate hits so damn hard.

I’m new to Regulate, but they got two previous albums under their belt. A couple listens to each show a fiery band with relatable lyrics and an urgent tone, but… something’s missing – something that’s abundant and apparent in their self-titled record. What is it? It’s… hard to say in totality. It’s a mixture of maturity and a redirection of anger that makes the band’s points more salient. This, combined with the better songwriting and addition of heartfelt moments and melody, makes it their best work as far as I’m concerned.

Regulate just feels focused here. They’re focused on community, belonging, and acceptance, among a few other things. Sure, there’s still anger – this is hardcore after all – but it’s set upon the things that threaten those aforementioned things, namely cops, the exploitation of the working class, emotional toxicity, ethnic genocide, colonization, and gentrification.

“Why Can’t We?” is an amazing example of gently interrogating yourself and others by asking the tough questions. It posits that people who care aren’t weak, reassuring ourselves to feel and be real.

These are all things I’m still actively learning, and it really builds a connection with you and the music to see it laid out so bare in a way that you relate to. It’s so much work to unwire yourself from how we were raised in societies that value silent contemplation and where being the best, strongest, richest person is success. It’s like we purposefully eschewed true emotional fortitude in favor of chasing things that will be unattainable by 99.99% of people out there – and we wonder why we die young, sometimes by our own hands.

Musically, Regulate really ride that early Turnstile wave of aggression and melody, but even that sells it all a bit short, and I’m sure it’s a comparison the band is sick of by now because I can imagine they get it a lot. As good as the riffs are, guitars aren’t bullies in the mix – bass is sturdy and always audible, drums are actually pretty varied for the genre, and Sebastian’s vocals are compelling in a way that’s not only admirable, but impressively lucid.

“Hair” is by far the most impressive song on this album because it breaks away from the conventions you’d expect. The vocals are not only clean, but sung beautifully throughout – up to now, Regulate have only employed growls and yelled vocals of varying types, a genre standard. It’s a moment of tenderness that I and my jaw fell for immediately. Lyrically, Sebastian connects with himself and people like him – the people of color out there with natural curls, or with a head full of dreadlocks, with any physical features that others either admonish people for or fetishize.

The melodies are strong as hell here. This is most definitely the catchiest song on this record by design, and one I could honestly see being played on the radio without anyone batting an eye in our post-Lizzo body positivity landscape. It’s not corny or heavy-handed – it’s a Latino man embracing and claiming all of himself, despite growing up being taught or urged to change aspects in order to fit in, having taunts and insults about skin color hurled at him. It’s a point of vulnerability that we’re not afforded too often in hardcore or punk, though that is changing with the times and I couldn’t be happier about that. Also, I must mention the way “Hair” leads into the album’s instrumental track, “Ugata”, touches my soul, and I wish I was exaggerating with that.

For all the moments of reflection and care shown toward self and others, it’s hard to ignore the more vitriolic entries of this album. “The Crime” is about as in-your-face as can be, spitting venom at the fact that Black and brown people are killed simply for existing as themselves.

The fact that I can name one or two people slain under each of the circumstances above in the last decade alone is reason enough for the song to exist, and yet many people still don’t see that this is the way things are, let alone that they need to change expeditiously.

How do they change? Regulate‘s got some ideas. “C.O.P.” is the most pissed song on this album (seriously, it feels like they gritted up the guitar tone a bit more for this one track) and rightfully so – stationing themselves with no ambiguity in the camp ACAB, this is a track that pulls zero punches: ‘If I had it my way/We’d get rid of you all/After that we’d kill off the politicians/But the pigs are a good start‘. It really tickles me when bands say exactly what they want to say without fear of reprisal. This is the kind of shit Ice-T went to bat for freedom of speech for with his band Body Count when he released “Cop Killer“, one of my favorite metal/hardcore songs of all time.

Seeing as I’m writing this on Indigenous Peoples’ Day (motherFUCK Christopher Columbus), I must shout out “You & I”, which demonstrates the indominable spirit of Native people the world over, an anthem to stand proud of who you are and spit in the face of colonizers of all types. Though I am not confirmed indigenous despite my Chicano roots, I can still feel the camaraderie seeping through the speakers of this track. It’s an intense song that isn’t using power for violence, rather for rallying the people against oppressors, a loud declaration that Native peoples are still here and, even after ceaseless genocide, slavery, and silencing. I’d encourage you to read Sebastian’s thoughts on the song and the day that’s worth celebrating.

This is just one of the best hardcore albums I’ve heard in a long time. It’s feeling and emotional, holding the ability to make you feel young again with its energy and drive, but carrying the wisdom and care we need to work toward a better future. Regulate are hopeful with their self-titled album, and perhaps that’s why it’s self-titled – it embodies the soul of the band and shows them at their philosophical best – so far. They acknowledge this isn’t the end. Growing is never-ending if done right, and if this is the band displaying that journey for us to see and connect with, that makes them an absolutely invaluable fixture in the hardcore scene and radical thought in general. Because these days, the most radical thing you can do for yourself, others, and the world, is care.