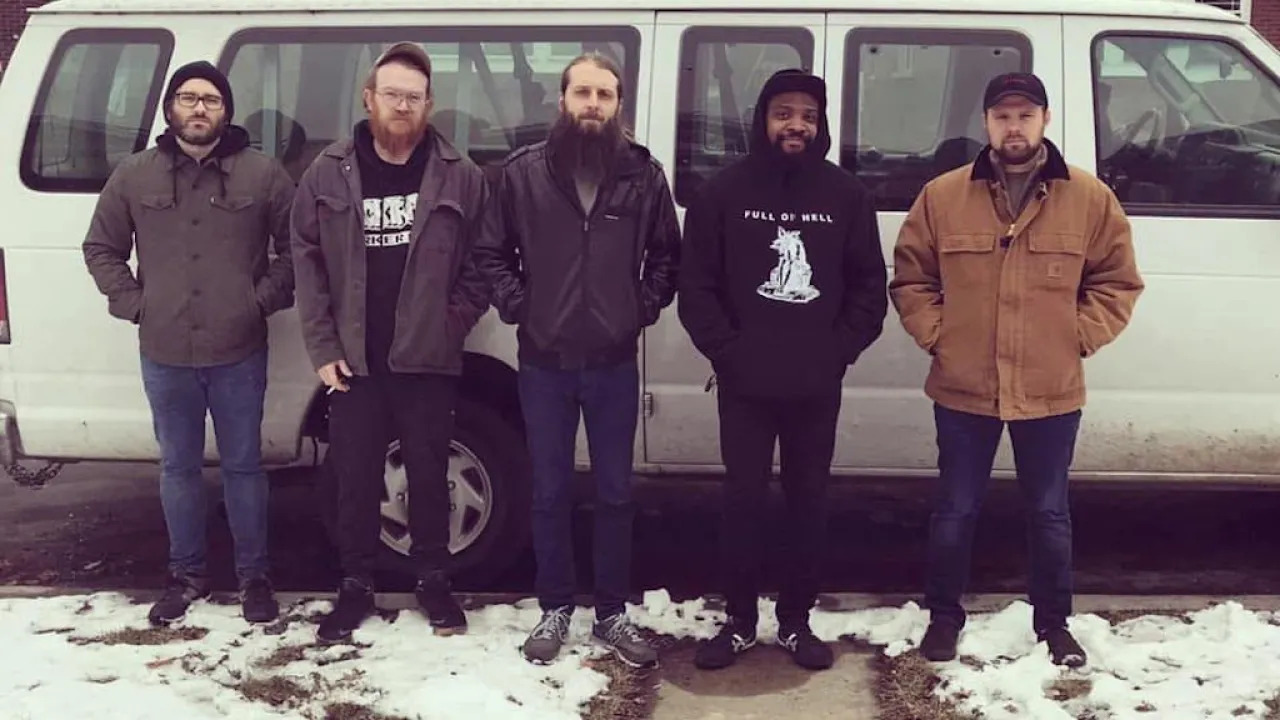 Colour Design distill a hell of a lot into this 27-minute album. Nothing Matters Now is a masterful, moving exploration of the human condition hovering at the brink.

Somewhere around my tenth listen of Nothing Matters Now, most of which were looped during my daily walks around my neighborhood, its spiritual, desperate, monochrome aesthetic really set in, sapping the colo(u)r from my own world. I don’t mean this in a negative way – rather, it brought me to its level, so I could empathize, so I could feel along with it.

I knew I was in for something special after I heard “Oblivion”, a massive single and album opener featuring two unlikely voices: Stan Liszewski of Terminal Nation – one of my faves – and Brett Campbell of Pallbearer. It’s a shoegazey post-hardcore track, yet here was a punishing death metal/hardcore vocalist contributing some rough textures to the track, and a doom metal singer with a penchant for eerie delivery bringing the moodiness. Shawn Hood, the vocalist for Colour Design, is somewhere in the middle, commanding a captivating, throaty yell with most vocals, always easy to discern, always brimming with emotion.

Cursory research will show that all three bands are from Arkansas so, yeah, makes sense they’d all know each other which is awesome. And it goes to show the artistic breadth present in a state like that. Hood intimated as much in a little interview with MetalSucks – ‘I just think the music scene here is very vast. Everybody’s into a whole bunch of different stuff. Most of us like country, rap, indie rock. You’ll see the most metal dude, and he likes Phoebe Bridgers.‘

Colour Design fly straighter than this statement might imply though, guest vocals on “Oblivion” notwithstanding. All songs are imbued with a thick atmosphere, subsisting on reverb-coated guitars, the patented post-hardcore openness, and a drive to pour yourself into the music. There’s always been this sickly feeling accompanying the post-hardcore I listen to – it’s alive, but ailed; emotionally vulnerable and, perhaps, physically drained, like someone terminally ill and staring down the final moments of life. Nothing Matters Now particularly feels trapped between two realms, purgatorial and lost in vast, blinding light. Themes and lyrics of the album reference death, religion, God, suffering, racism, and a general stuckness that’s hard to convey, but endlessly felt and relatable.

To get dark straight away, “Feel Like Going Home” sounds like a song-length allusion to suicide or other unfortunate, untimely death. Not only is the instrumentation profoundly melancholic with its moaning guitars, but the lyrics go even deeper:

Head above the clouds, body below
Feel like going home’

Moreover, “Found God. Lost Touch.” is a bit more explicit in its references to God and existence. Hood’s vocals are a bit more intense here, projected harder, staccato, and punchy in the verses as if channeling a passionate preacher at his pulpit. Still, they rain down like tears, particularly during the chorus.

‘Am I here for a reason?
Has God cursed me?
How will you remember me?
Can I live free?

Oppressed, trampled
Don’t be afraid to die
Temporary pain
Brought to life
Shall I be released?
Feel at ease
Come to life
I want to believe’

Colour Design weave these existential considerations alongside real-world suffering and trauma as well. “Roanoke” reads like a poem dedicated to one of the worst horrors exacted by historical America: slavery. Since Roanoke, Virginia was a key coastal colony for early America, it’s impossible to not interpret the song’s mentions of ships at sea and people who have lost all identity and sense of self as if devalued and brutalized like nameless cattle as part of that bloody legacy that we still contend with today. Likewise, “Newark 1967” starts with a sample of an incensed speech by William Haden, a Black civil rights leader from Pittsburgh. This speech was from 1968, the year Pittsburgh saw riots as a result of the state-sanctioned assassination of Dr. Martin Luther King Jr. One year prior, Newark saw its own riots as a result of a Black man being beaten by police for the most minor of infractions. Sound familiar? 26 people were killed, hundreds more injured during the riot.

The subjects are treated with the weight and seriousness they deserve, and the songs themselves would be as beautiful as any other on Nothing Matters Now were it not for the gruesome nature, but it’s refreshing to see bands, especially those in the post-hardcore scene, speak about these issues and show that racism, police brutality, and gross racial disparity are anything but new, definitely not exaggerated in our social media age, and must change at nearly any cost if we are to gain any semblance of societal harmony and equity. Dare to imagine a better world for yourself and loved ones – then make it happen.

The melding of all these themes and lyrics makes Nothing Matters Now‘s picture come into full view. It’s a missive on life, death, loss, suffering, oppression, all balancing on the razor’s edge of existentialism and grasping at the seams of a salvation from it all – one that may not even exist. If you entertain the idea that the main arc of the album is told from the perspective of someone in limbo – able to reflect on the lives lived before, welling with a desire to go home, and to know if there is a way out – the pieces fit together in a satisfying way. It could also be that life as we know it is the limbo alluded to by the music, dividing a heaven and hell we either acknowledge and believe in, or don’t. Colour Design seem very much preoccupied with that question, though maybe not explicitly. Their music doesn’t provide an answer, but it most definitely stirs the thought within you.

Even as “Necessary End” closes the album out with a grim message – ‘I don’t want to die/But I want to die‘ – which contrasts with “Oblivion” and its slightly more optimistic ‘I don’t want to die anymore‘, you get the sense that something went wrong during the course of Nothing Matters Now. The instrumentation dissolves and slows like each note weighing heavier and heavier on eyes as they close for the last time. Hell, the album title itself is a defeated cry into the void, torn from the lyrics of that ending song and yelped from a kneeling position as if to submit to destruction or beg for deliverance. The right answer is whatever brings you more peace. My hope is that Colour Design found their own peace in the process of putting this wonderful album together, or at least the ways by which they can microdose it. Because sometimes it’s the little things that keep us pushing onward.