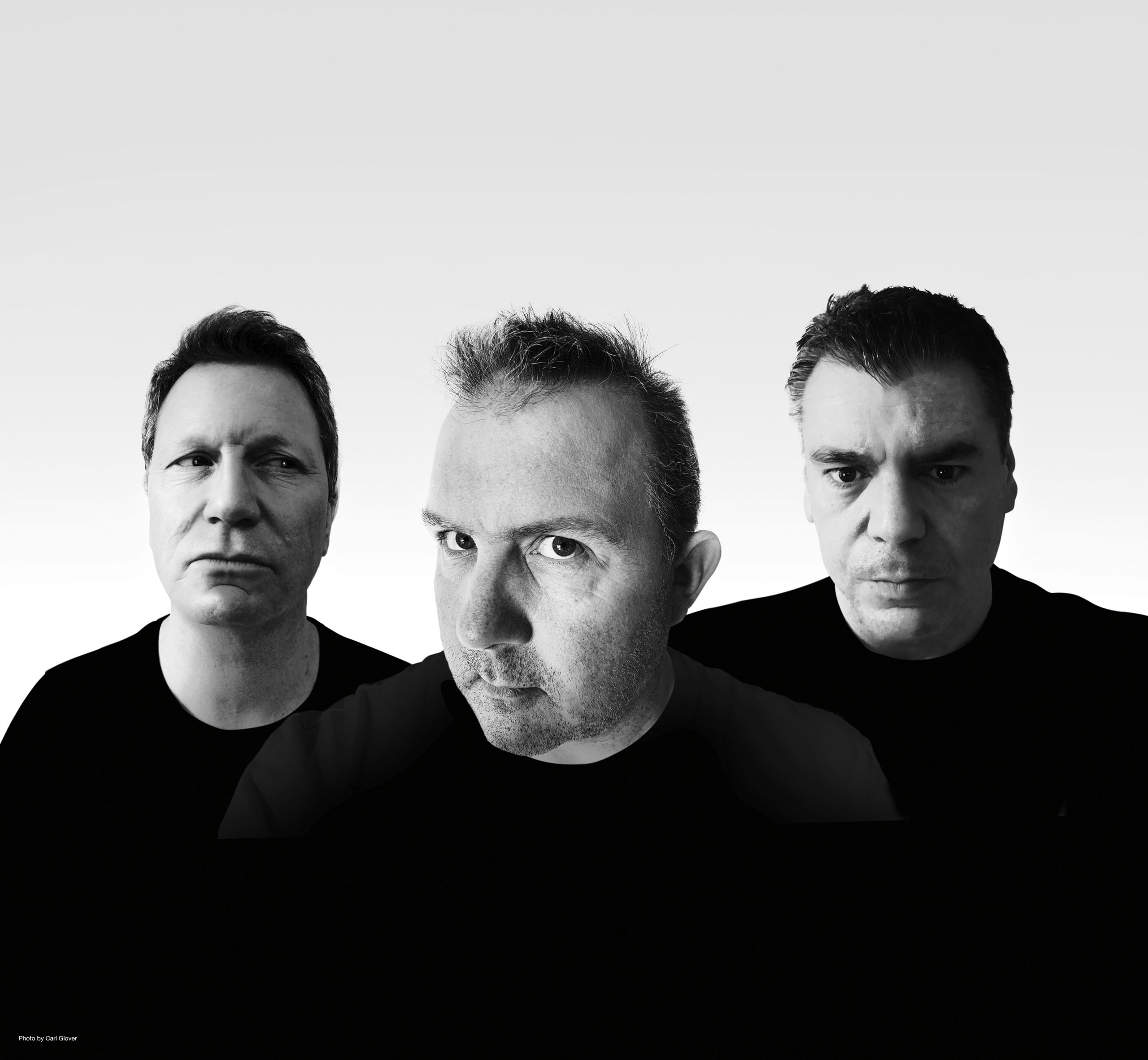 Dry, British satire for the ages, or grim warning of our impending future? Both are healthy interpretations of Frost*‘s latest prog rock output, Day And Age, catchy as it is bleak.

‘Hello, and welcome to the rest of your life. Before we begin this short journey, please sit back, relax, and remember: enjoy yourselves… you scum.’

So begins a prog album for the ages – a dying age, one of uncertainty. Frost*, now a trio after the great Craig Blundell stepped down two-ish years ago, are back with an album that’s everything I expected it to be and a bit more. Though I’m not terribly well-versed in their work, having only come in with their previous album in 2016, Falling Satellites, I am familiar with one particular member’s pedigree.

Made up of Jem Godfrey (keys, vocals), Nathan King (bass, backing vocals), and John Mitchell (guitars, vocals) with the help of a few pals on drums (Kaz Rodriguez, Darby Todd, Pat Mastelotto), I’ve been a fan of Mitchell and other prog rock projects he’s done like Lonely Robot and Kino. It’s with that history that I went into Day And Age, knowing I could depend on it to bring me a Brit prog edge that I’m liable to consume at any given time.

If you’ve read my reviews of previous adjacent projects, you know I love the tenderness and calm they bring, but leave plenty room for the rock portions to overtake: the riff-driven morsels that provide the catchiness and power the adventurousness this music has. Frost* are equally adept at all of this, making every song sound like a veritable journey, pronged with an epic flavor that doesn’t enlarge it to unmanageable lengths, but makes it memorable nonetheless.

The intro quote from before is delivered before the first song, the almost 12-minute title track, by an unassuming, though cheeky little girl. It lays the foundation for what is ultimately a dark album – spoiler alert – one reflective of our times with a wink of cynicism and a wry nudge, one of the few positive-leaning notes you’re afforded by the band. “Day and Age” sees Mitchell lead with vocals, major melodies that feel skybound (not “Skywards”, though we’ll get to that later), reflecting on aspects of identity and mundanity. It’s a great long-form prog song that is, somehow, one of the weaker offerings on the album. It is not a bad song at all, mind you, but the length does show, especially on repeated listens, and other tracks are just tighter and more collected in comparison. In other words, nowhere to go but up, and that’s a very good thing.

Where the real fun begins is with “Terrestrial”, another Mitchell-led offering that really kicks things into high gear. This is why I love this take on progressive rock – the songs can be so anthemic and stirring, literally shiver-inducing, bringing to mind a new frontier to explore with new memories and discoveries to make, all while the vocals belt out and the guitars tastefully power through the mix. The chorus is indicative of that spirit, coupled with meaty, soaring guitars:

‘Staring out to sea
Solitude in motion with new meaning
Hiding in the half light, holding out till sunrise
Staring back at me
Quiet desperation this time frozen
Never knowing what’s out there‘

For something a little different, we have “The Boy Who Stood Still”, which is a narrative story track of sorts having to do with a boy who could vanish from the perception of others by simply standing still. Quirky instrumentation backs spoken word that gives our subject some nuance as the gift-turned-curse alters the boy into a state of perceived immortality, outliving all those he loved and likely watches in stillness and silence to this day, undetected and unnoticed. There’s a song in here though – sung by Godfrey, the lyrics detail a haunting, fantastic marvel; ‘I stood and watched you build them/With faces just like ours/Five figures standing without eyes/Their mouths aimed at the stars‘.

It was here, a couple loops in, that I noticed a similarity between that description and the album art, which shows five humanoid figures without eyes holding megaphones, fanned out in a field and tilted ever so gently skyward, primed to project a message. The chorus of the track may hold a couple more answers about what’s being dealt with here:

It’s all delivered in a gospel-like projection, grand and enormous, utilizing choral vocals to reach anyone within earshot. The five figures seem to represent five elements of our uncertain life, ones touched on a lot on Day And Age. People’s laser-focus on the self tunnels our vision from others’ experiences and woes. Rage builds for many reasons, but can be the effect of our remaining three elements, or causes – fear, blame, and lies – and acts as an outwardly destructive force on an interpersonal or intrapersonal level, and so on. These are, in a manner of speaking, some of society’s, and our age’s, biggest ills.

We see the aspect of lies played with more directly in another track that’s nearly all Godfrey’s doing as it focuses on his vocals,  keyboards, and production, “Waiting for the Lie”. Paraphrased, he somberly and acutely sings that we’re all simply waiting for the lie when someone opens their mouths, when the government speaks, when blame for something is to be set, and how the lie has become the norm that gives us comfort because it is so expected (‘the truth is so undignified‘).

Blame is contended with on “Skywards”, imploring it not be placed on what’s skywards, like a higher power or the universe itself, but to face your pain and your reality yourself in order to make a better outcome. A grounded view despite its title and similarly high musicality. Cynically, it could also be commentary on how a higher power can’t save you from your problems which, for some, is an isolating prospect that makes life not worth living without that guiding light. On second thought, and with what’s to come in mind, the latter is more fitting.

Our climax is in the last two tracks. “Kill the Orchestra” fully cements the bleak outlook the rest of the album only flirts with. That song in your head? Kill it – it’s a nuisance to others, and gets in the way of your true purpose. Those dreams you have? Unattainable, and not what’s planned for you anyway, so scrap them. The chorus is delightfully dark – ‘Let’s take the songs to the town/So they can shoot ’em all down/Kill the orchestra, we’re dying anyway‘. The instrumentation here is equal parts playful and calming while providing some of the heaviest moments on the record.

At the end, you hear the motif melody from “Day and Age” and a deep voice say ‘relax‘, ‘everything is okay‘, and ‘enjoy yourselves‘ in a hypnotic manner before transitioning to the primary riff in “Repeat to Fade” which is, in short, the lobotomy that ends us as we know ourselves. Behind bulging, warbled bass and massive drums, we hear Mitchell scream ‘enjoy yourselves, you scum!’ and ‘everything is okay!’ among other violently delivered lines. The first verse says, ‘Trapped in metal coffins, endless days/Do as you are told and fear allays/Sacrifice your soul to this machine/This is not a place for living dreams‘, a damning statement as to the individuality you’re forced to give up if you’re to matter in the bigger picture. The music is glitchy and more mechanical in nature to fit with this theme, calling to mind more voguish classics like Pink Floyd‘s “Welcome to the Machine” and The Wall. You hear the little girl again one last time – ‘Subservient in essence, never free‘ – before the chorus rides us out into the furnace of an ashen, uncaring society, to serve, but certainly not live. ‘There’s only one way out, repeat to fade/There’s no rewinding life, repeat to fade…‘

In the end, this is Frost* perhaps broadcasting a warning to us, showing how the worst parts of us can malign and doom us all to a colorless life. This is on par with heady sci-fi novels or movies that carry similar messages intended to make us to stop in our tracks and think. In essence, Day And Age doesn’t offer any answers, but rather holds up a magic mirror to show us where we are and where we will be if we continue on this track, all supported by deft and entertaining prog rock that is, on the whole, much too upbeat and hopeful at times to match with the themes. This isn’t a mark against the album – in fact, it may be that we’re to interpret it as such, listening to the words of warning, but still finding kernels of hope in the beauty of the music, pressing forward to plant seeds that will save us from a dystopian fate like the world Frost* built here. Regardless, it’s a message well-received and well-designed. May we heed it or lose ourselves and others.