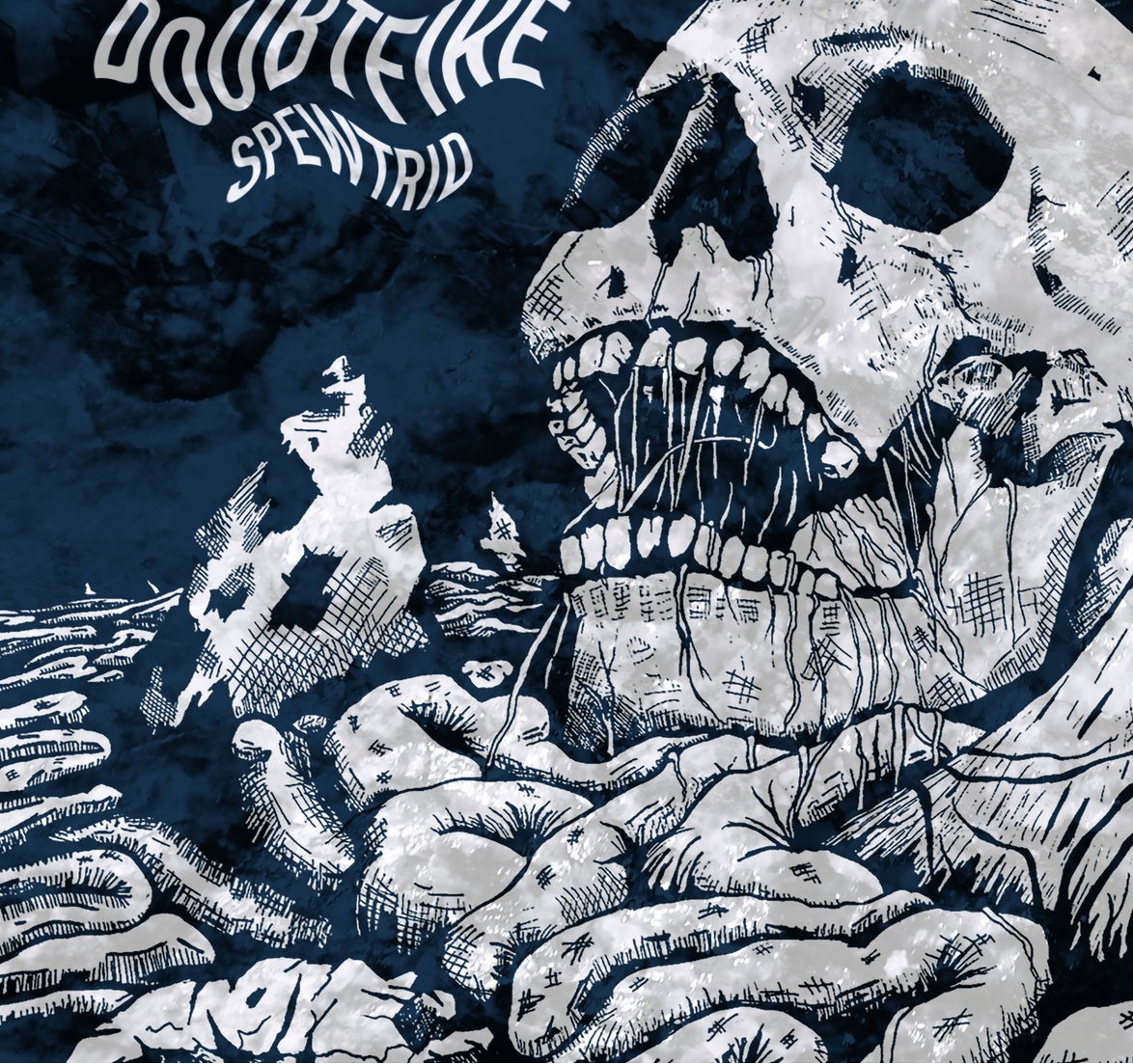 Doubtfire‘s Spewtrid is extremely concise, dark, and harrowing. If you have ten minutes to spare, I promise you will not be disappointed.

I’ve gotten very into short albums and EPs this year. It’s all genre dependent, of course, but when it comes to angry, abrasive, or energetic music, I’m loving the sweet spot that’s anywhere between 15 and 35 minutes. Two of my favourite releases this year, Barren Womb’s infectious Lizard Lounge and Resin Tomb’s grim, self-titled debut, lie at the extremities of this spectrum, coming in at 35 and 16 minutes respectively. I thought that, unless I was to review a grindcore album, Resin Tomb would remain the shortest release I wrote about this year. Doubtfire’s Spewtrid proved me wrong.

I was drawn to this particular EP initially because of its title – Spewtrid. What a fittingly grotesque word. My own band is currently trying to find a name for our upcoming album, so I’ve spent a lot of time assessing other bands’ album titles. Secondly, I noted with some surprise that, even though the EP is tagged as ‘black metal’, its four tracks combined only just cross the 11-minute mark. It doesn’t surprise me when I see a singular song of this length on a black metal album, so naturally, I was curious. How much would Doubtfire be able to say in the time it takes me to drink my morning coffee?

Quite a lot, it turns out. The EP’s opener, “Bronze Bull”, though sinfully short, instantly clarifies why ‘black metal’ is not a misnomer. Angry, tremolo picked minor chords and blast beats; if that’s not black metal, I don’t know what is. Doubtfire mix it with some shrieking guitar lines, more reminiscent of noise rock than anything else, and disintegrate into a quasi-breakdown complete with what sounds like an upright bass sample, threatening and woody. By contrast, “Sheltered” starts off with an odd, jazzy section, before it launches into a grim, machine-gun shuddering riff, the chords demonic and furious. Anxiety sets in, a strange chattering synth on the left heightens my adrenaline. The song ends almost before it begins, with funereal pads.

The sense of incompletion I got at the end of “Sheltered” is a recurring theme on Spewtrid. None of the songs really end, they merely sort of…peter out. There’s no finality, no feeling of closure, just a cold sense of inevitable, slow demise. Especially with the first three tracks being so short (“Cramp” in particular – all I have to say about this one is listen to it; it’s so evil), it’s hard to find a sense of narrative or development. This isn’t a criticism – it’s obviously extremely intentional, and I wonder if it was done as a lead-up to Spewtrid’s gloomy closing track, “Debt”.

I didn’t really like “Debt” the first time I heard it, and now all I can think about that is: what the fuck was wrong with me? There’s a lot going on here that deserves to be recognised. One of my favourite moments on Spewtrid happens in this song, right near the start. Its second section features a melody played on both guitars, consisting of no more than five notes over a descending bass line, with no harmony. It’s so simple, and it could easily be considered uninspired, but there’s a catch: the two guitars aren’t perfectly in tune. Normally, I would consider that to be a huge oversight, nigh unforgivable – but it’s what makes this melody for me. Something about it grips my heart and wrenches it down to the pit of my stomach, makes my face fall at the desperation of the world, and all with just two guitars playing in imperfect unison. When the song later devolves into chaos, fumes with aggression and loathing, it’s painful, but it doesn’t come close to the acute dejection those few simple notes made me feel.

“Debt” also just…ends. Without a fizz or a bang, without fuss, it just concludes and is done. I’m left wanting and a touch bewildered – surely Doubtfire can’t just leave me hanging like this? But they can, and they do, time and time again. It’s clever though, because now I want more. I want to know how this continues.

I know it seems like I haven’t said much in this review; I considered dissecting all of the songs, because I could, but then why would anyone listen to it? It’s the kind of thing, at risk of sounding cliché, that you just have to experience for yourself. If you don’t like it, fine; it’s not long, you’re not sacrificing much of your time here. If you do like it, I think you’ll join me in saying it’s 11 extremely well-spent minutes. Spewtrid somehow feels shorter and so much longer than that, if you pay it the attention it deserves. Ten minutes of unequivocal, undeniable angst, torment, and heartbreak, all rolled into one festering black-metal-noise-jazz experience. I love it, I couldn’t even tell you why. It makes me feel dark, dirty, and so, so alive. I know I won’t be alone in this.