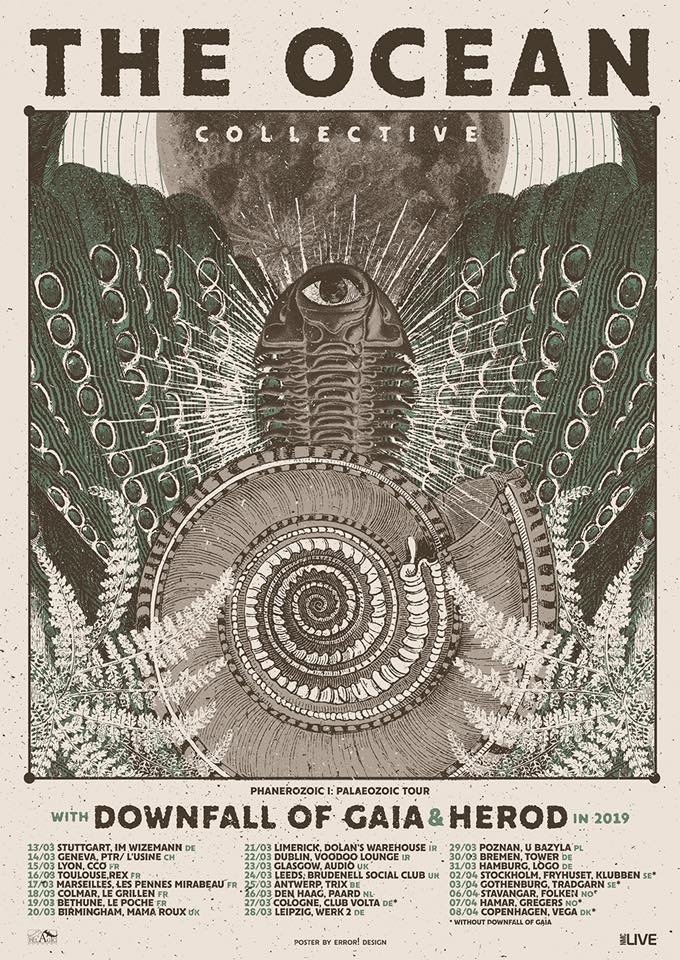 By Rodney FuchsJanuary 8, 2019 No Comments

German prog- / post-metal collective The Ocean just came up with a new record in 2019. Phanerozoic I: Palaezoic is the first opus of a double album and already enchanted the post-metal scene with its great songwriting. The band toured heavily in fall 2018 in order to support the record and won’t stop by now. After taking Rosetta and Arabrot with them on road, we get some more exciting bands. Also: all bands will have a new album released by the day the tour starts!

Berlin-based band Downfall Of Gaia started as a crustcore / post metal act and developed their dark and gritty style within the last years. On their upcoming record, Downfall Of Gaia add an interesting black metal aspect to their music that completely went away from their early hardcore / crust roots. Just take a listen to “As Our Bones Break To The Dance” and you know what I’m talking about. Ethic Of Radical Finitude will be released on February 8th via Metal Blade. Find out more about the record on this article.

The Swiss band recently signed with The Ocean‘s band leader Robin Staps’ label Pelagic Records and is about to release a new album called Sombre Dessein on 15th February. As Pierre Carroz of Herod comments about the album’s concept:

„The concept of the album is about the end of our Judaeo-Christian and thermo-industrial civilisation. The artwork and video clip are made up from footage of “Shipbreakers”, people who dismantle huge container ships which end up mooring to die on Indian or Bangladeshi shores, which turns out to be hell on earth for these people whose every day work involves constantly risking their lives to feed their families.“

The record was produced by Magnus Lindberg from Cult Of Luna. Needless to say that this band comes with quality and perfectly matches the musical output of these evenings! The tour dates are the following:

* without Downfall of Gaia

Tickets are now on sale! Make sure to stay up to date by liking the band’s Facebook pages! (The Ocean | Downfall Of Gaia | Herod)