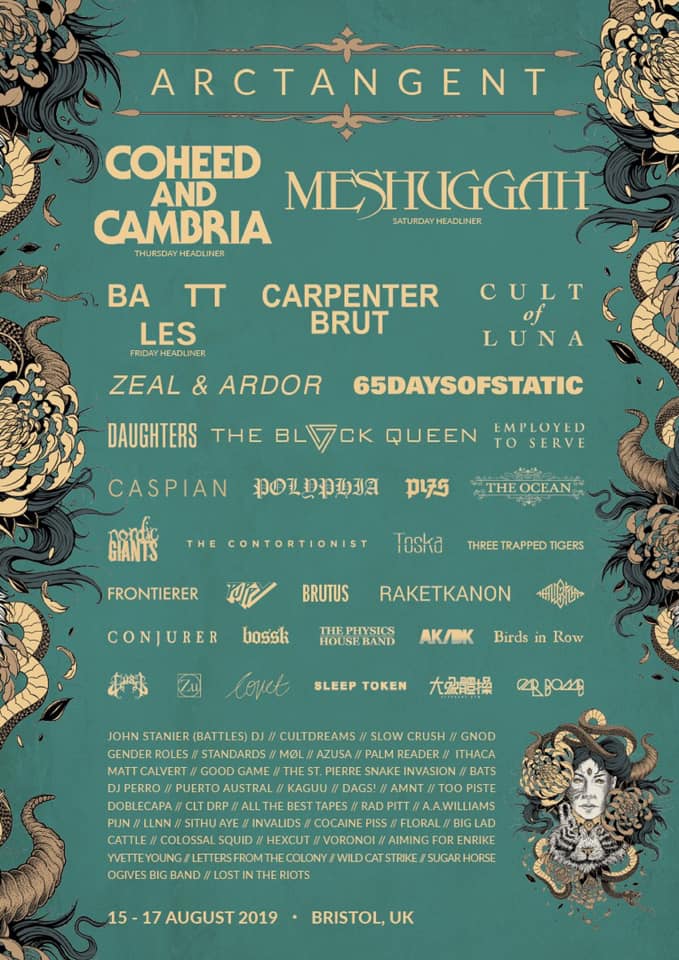 By Rodney FuchsApril 2, 2019 No Comments

The bookers of ArcTanGent Festival really did their homework. There is another BIG name on top of the lineup that already features acts like Meshuggah, Cult Of Luna and Battles. The Thursday headliner will be the almighty American conceptual prog-rockers Coheed And Cambria! Now get excited and prepare for the full lineup of ArcTanGent, but remember that there are still bands to be announced!

Coheed And Cambria just released their album Vaxis I: The Unheavenly Creatures last year and are coming for a European headline tour this April. They fulfill the lineup of ArcTanGent with their unique blend of music while bringing in some prog rock into the overall diverse lineup in 2019.

But also Belgian post-hardcore outfit Brutus, who just released their new record Nest this Friday, got added to the lineup. Other new names are Raketkanon, Puppy, Cultdreams, Slow Crush, and Gender Roles. The diversity of the lineup is great and it instantly comes to mind when taking a look on the poster. Bands like Birds In Row, Frontierer, Car Bomb, Bossk, The Ocean or Zeal & Ardor create a very strong and interesting middle field. But also the ‘smaller’ bands really got some outstanding names already. For example Danish blackgazers Mol, metallic-hardcore outfit Ithaca, A.A. Williams, Pijn, Azusa (featuring members of The Dillinger Escape Plan and Extol) or Letters From The Colony. But these are only a few of many noteworthy names!

Take a look on the full lineup poster:

As you can see, ArcTanGent features music styles like black-metal, post-metal, hardcore, mathcore, prog-metal, math rock and more. That being said: it offers everything you need at a good festival! The festival happens in Bristol, UK from August 15 – 17.

More than 75% of the tickets are already sold, so you better be quick and get your tickets now! They are on sale on the festival’s homepage. Also make sure to follow their Facebook page to not miss any further band updates!