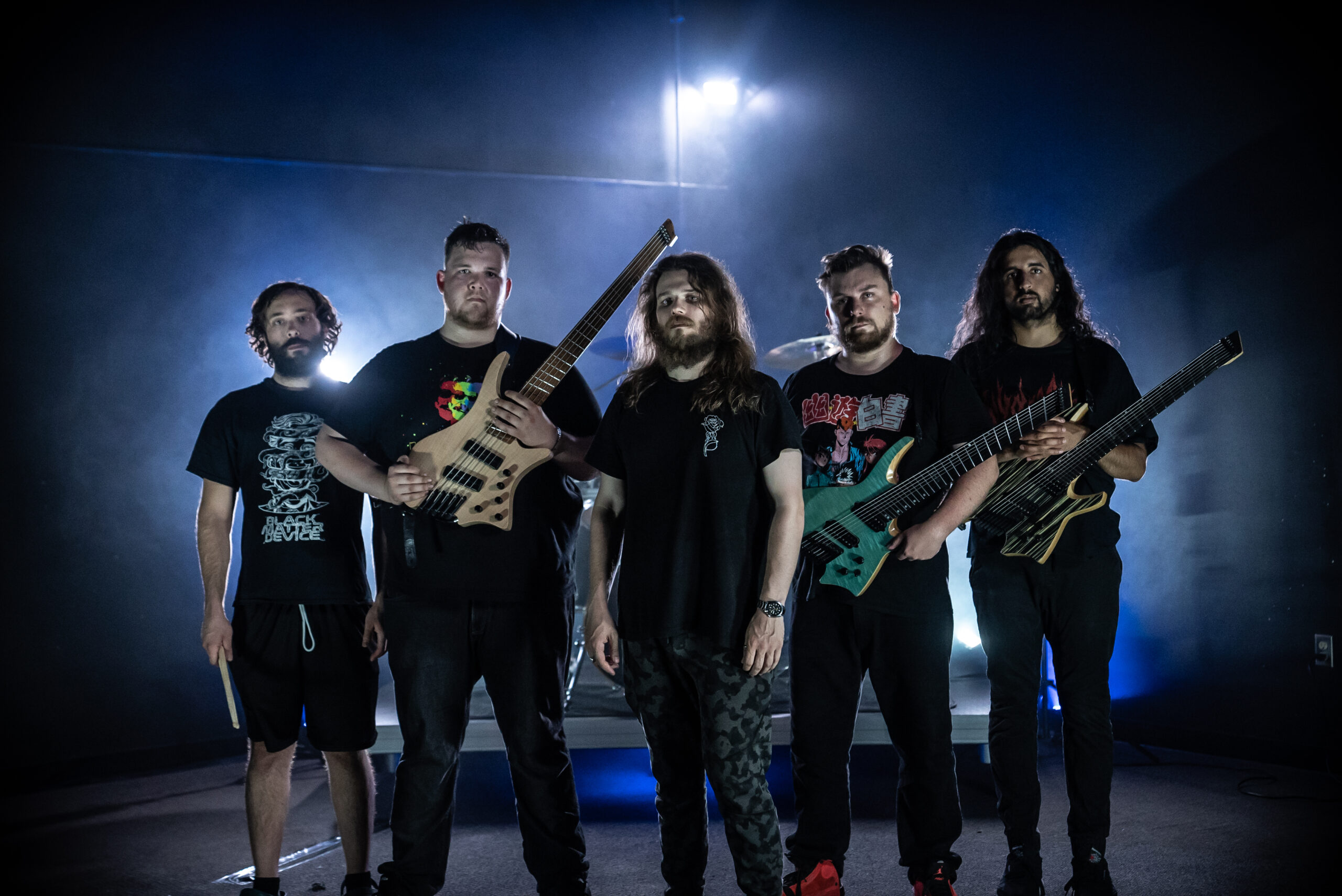 By Landon TurlockSeptember 5, 2022 No Comments

Greylotus first came to my attention from following Drewsif on social media. I always understood Drewsif to be a progressive metal/djent musician. Hence, I was intrigued by the idea that he was joining a technical death metal band on bass. Later hearing that the band also featured members of Wormhole, Equipoise, Cognitive, Mithya, Veil of Pnath, and Emerge A Tyrant (among others) made me even more curious. As such, when the Baltimore band’s debut full-length, Dawnfall, came out earlier this summer on The Artisan Era, I felt compelled to review it. I was absolutely floored by the technical prowess, genre-bending, melodicism, and layers of symphonic and electronic instrumentation that fill the record. It seemed fitting to connect with Greylotus about being Everything Is Noise‘s Weekly Featured Artist. Guitarist Ben Towles generously took some time to help me understand the group’s inner workings.

Greylotus was founded on a philosophy that Ben articulated as rejecting dark thoughts and embracing self-improvement and growth. The group’s name is itself a symbol of this idea:

‘The name Greylotus represents the process of self-actualization along with doing away with the adherence to perfection. The lotus flower begins as a seed in the dirt. It then sprouts, pushes past the initial pain period through the mud, and is then faced with currents of the lake pushing and pulling in all directions as the seedling desperately chases the refracted light of the sun. Then, once the lotus finally blooms, it is grey – drab and imperfect, but completely authentic and itself just as intended.’

This adherence to an uplifting and inspirational message is perhaps unique for heavy music, but it is undoubtedly effectively conveyed. “Currents”, a song from the new full-length, balances triumph with struggle. Choir-like vocal layering, strings, soft keys, devastating breakdowns, pinch harmonics, and guttural screams are a captivating combination that extends throughout the record and makes for an inspirational yet intense listen. Elsewhere, spoken word and light synths like those on “Chiaroscuro” uniquely complement incredibly rapid, technical passages that still maintain melodicism.

This journey, however, did not start with Dawnfall. In 2018, Greylotus released their first EP, Savior, which Towles described as a cry for help.

‘It served as an exercise to document and anthropomorphize anxieties, dark thoughts of escape, and guilt to do away with the identification with the aforementioned negative thought patterns. With those songs and their subject matters existing externally, they could then be observed as an ‘otherworldly force’ which could then be rejected, even though they are immortalized. As a result of the subject matter, from a musical standpoint it was very dark.’

In the intermeddling four years since Savior, Dawnfall was created. Drewsif acted as a producer of the record, in addition to playing bass. Hundreds of hours were spent on video calls finessing lyrics and vocal patterns throughout the pandemic. Some songs were written by individual members, while others were written collaboratively before being brought to Drewsif, who helped bring the pieces closer to their final form. Extreme metal master Buster Odeholm (Vildhjarta, Humanity’s Last Breath) reamped, mixed, and mastered the material. In many ways, Dawnfall represents a continued interrogation of the concepts explored on Savior:

‘Dawnfall … represents the uncertainty and insecurity of the growth process; the seedling’s path through the water after Savior‘s seed state in the mud. It is erratic and indecisive as it tackles the question of ‘what now? There’s a lot of self-judgment, deep reflection, realizations, self-doubt, deep dread, and at the end an epiphanic moment of doing away with the concept of duality and perfection. It’s a wild ride that ends in an intense yet confident state of being.’

This concept is more fully realized by the impressive roster of musicians that make up Greylotus. With the variety of bands and styles the group’s members play in, elements of technical death metal, djent, slam, and progressive metal all feature. This combination could come across as incoherent and messy in less talented hands. However, on Dawnfall, this variety of influences melds in a highly entertaining, focused, and intentional way:

‘The combination of having such opposing backgrounds along with having multiple outlets (Sanjay playing with Wormhole, Matt playing with Wormhole and The Wind In The Trees, Lee playing with Mithya, and Drewsif writing with his solo project) allows us to be more accepting of ideas that we may not otherwise include in what we would consider our ideal music. Ironically this ultimately leads to a concoction that is greater than the sum of the parts and a highly rewarding collaborative experience.’

This same level of intentionality and variety is reflected in the artwork for Dawnfall. I found the cover striking, fantastical, and engaging, especially in a genre where artwork is often brutal or parametric. Towles talks us through the creation of it:

‘Since a persistent theme throughout the record is uncertainty, we felt that capturing the moment of either sunset or dawn suspended in motion over a beautiful but intimidating water/landscape would accurately portray the erratic yet eventually collected and congruent journey that is described lyrically and musically. The art (created by Justin Abraham) contains within it a visual actor that represents each song – e.g., the mouth of the cave is “Capgras Delusion”, the stone towers in the background represent “Chiaroscuro”, and the well is “Hoarfrost”. We wanted to provide something the listener could peruse while enjoying the record and find new details upon every listen.

‘Being completely transparent, we wanted something similar to a Donkey Kong Country map for the record!’

With such an impressive debut full-length behind them, the future is exciting and wide-open for Greylotus. They wish to tour behind the material as much as possible while also engaging in ongoing personal growth that will inform the creation of their subsequent material. I cannot wait to see where Greylotus goes from here, both in terms of performances and new music. Ben had some final words for all of you that I wanted to include below:

‘Your own personal experience of healing and continued self improvement may not necessarily reflect ours, and that’s perfectly okay. Everyone’s experience is different – the most important thing to hold close to you is to not judge yourself for the intensity nor the order or perceived progression or regression of your emotional and mental state. Define success by working toward your ideal state, and nothing more, and you will never be dissatisfied.