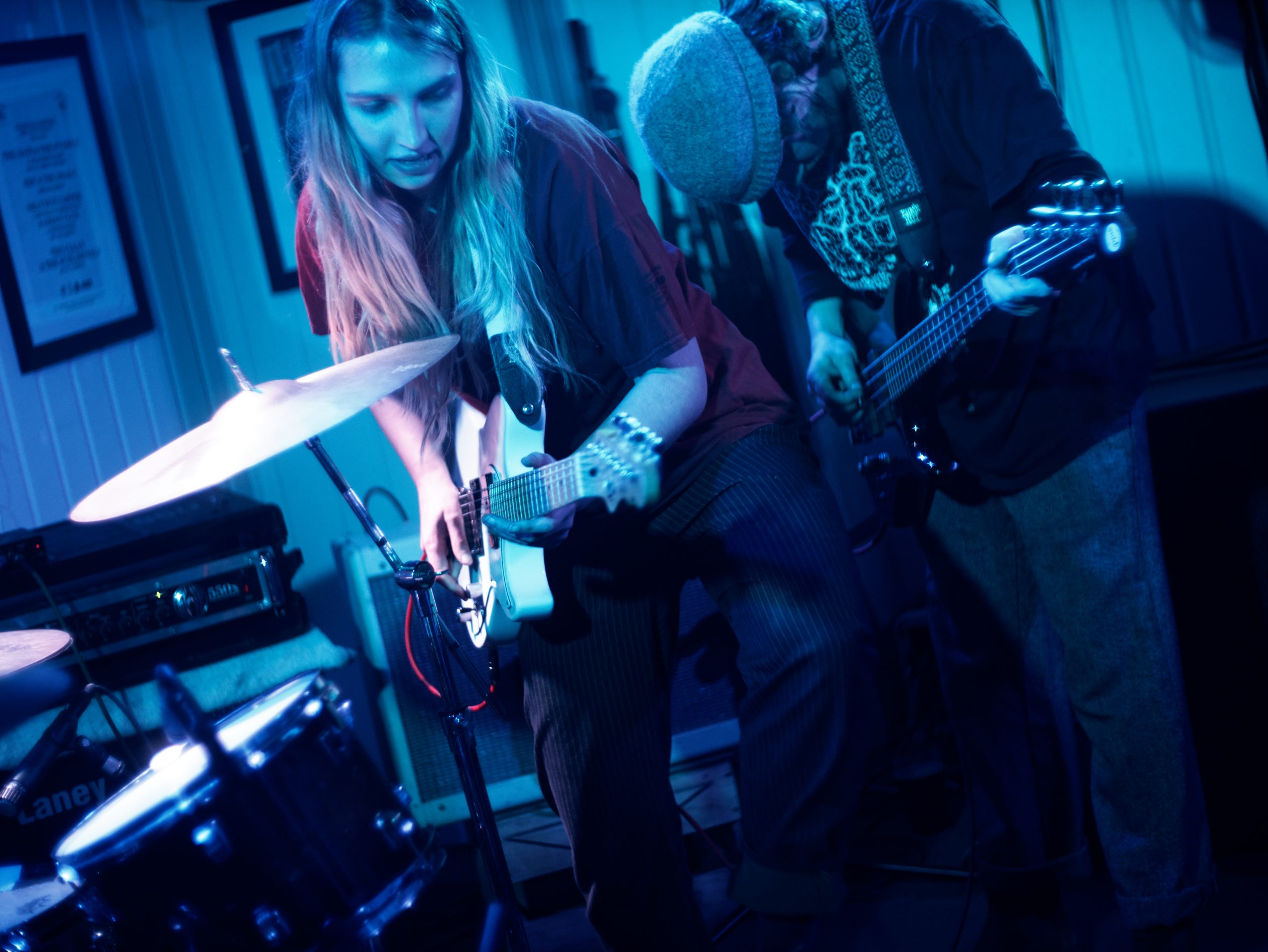 I recently drove to a different city to see a gig for the first time since New Zealand’s Covid lockdown in early 2020. It wasn’t far, only from the very bottom of the country to a few hours up the coast to Dunedin where I grew up, but I went alone, something I hadn’t done in a long time. The band I went to see was noise trio Wax Chattels from the far North of the country, as well as two opening bands, of which I knew one and had heard good things about the other, so I figured it was going to be worth the mish. Even though I was alone and the driving was boring, I didn’t mind having the time to just listen to some CDs – and I was really, really excited to see Wax Chattels.

So, if that’s the case, how come Wax Chattels aren’t the featured artist here? While they did kick ass, the band that absolutely made my night was Dale Kerrigan – fronted by an unassuming blonde guitarist/vocalist, on this particular night they had a drummer, bassist, and two additional guitars; it was a fat sound to say the least. What impressed me the most was that they managed to have so many different harmonic and melodic things going on at the same time, with guitarists hardly ever playing exactly the same thing, and still get every idea across clearly and with a natural ease. It was noisy, it was dark, emotionally heavy, and so, so captivating.

Main songwriter Shlee Nicholls also has fond memories of this particular show – the inclusion of her friend Jayde Medder as the third guitarist made the night stand out among the slew of live shows Dale Kerrigan have done recently, and she remembers it as a ‘real fun and noisy set’. Thanks to the loose, noisy nature of their music, Nicholls says all of the songs are different live from recordings, and often vary from set to set: ‘that’s the beauty of noise’. If Dale Kerrigan could play live with any band, Nicholls says they’d love to play with Unwound, Sonic Youth, Free Kitten, Coughs, Nirvana, and Beethoven – an eclectic mix, but having heard what they do, not surprising.

Sonic Youth in particular are a ‘huge’ influence on Dale Kerrigan as a whole, with Nicholls also being massively influenced by Kim Gordon specifically, especially her performance art. Pieces like Proposal For A Dance, in which Gordon ‘creates sounds through movement, kinda spoofing the male guitarist gestures’ and a video in which she walks around LA ‘rubbing her guitar on all the buildings’ resonate especially with Nicholls, who has a particular interest in ‘the notions and distinctions between sound and music’. She also likes to explore unconventional ways of using the guitar, and cites Christian Marclay’s piece Guitar Drag, in which he drags his plugged-in guitar behind a pickup truck, as a ‘massive inspiration’. She adds: ‘Now I love to rub my guitar on anything that’s around me when I’m performing – usually the amp, or drum kit’.

Dale Kerrigan’s debut album, noise bitch, was born from an art project Nicholls did at the Dunedin Art School. Tired of playing gigs ‘where men came up to my pedals and told me what they did’, Nicholls created a pedal that did ‘absolutely nothing’ and put it in her chain (it can also be seen on the album cover) – ‘the noise bitch pedal gives me powers on stage’. The concept of the album flowed from there, and became about Nicholls’ teenage self ‘finding a way to this form of expression’.

While Dale Kerrigan are hugely noise-driven, there’s also a deep emotional quality to their music. It’s all about contrast – gnarly guitar abuse gives way to intimate clean sections, distorted yelling morphs into sweet melodies, and heavy riffs trade places with lovely chord progressions. To me, many songs on noise bitch and in the set I saw Dale Kerrigan perform seem to portray some sort of internal conflict – that raw teenage angst is certainly a part of that, and everyone’s been there. Nicholls says that, to her, ‘it’s a nostalgic album’, but that she hopes that ‘people will have their own take on the album’.

About the direction and inception of the band, Nicholls says:

‘Noise has always been the preferred way of expressing myself so creating a band of this genre was really inevitable in my case. Dale Kerrigan was originally just me creating weird GarageBand recordings in my bedroom. Once I had enough songs, I wanted to jam them with my mates and it just kinda clicked.‘

It’s fortunate that they all did click, as a lot of the band’s sound comes from improvising and extended jam sessions. While Nicholls will normally write the bulk of a song (riffs, structure, and melody), the real magic happens in the practise room. Nicholls elaborates: ‘We have huge jams; we will just play with an idea over and over again’. The rest of the band normally write the majority of their parts during the jamming process, but most songs still have unwritten parts that the band just jam on stage until their drummer cues a change. Dale Kerrigan like to keep their performances a little raw: ‘We don’t practice much and like to keep the sound as unpolished as possible’.

While it is true that ‘tight’ is not a word I would use to describe what I saw when I witnessed Dale Kerrigan a month ago, I also agree that the looseness of their performance only adds to the charm of their music. One song in particular stood out to me – I didn’t know this at the time, but it’s called “grudge”, and it’s on their debut album (thank fuck for that – now I can hear it whenever I want!). What I particularly like about this one is that, even though it’s raw and repetitive, it also has this wonderful, visceral black metal vibe to it – something that hits me deep, takes me back to my teenage years, and yet is more emotionally complex than I could express in words. Musically, it’s almost sludgy, and it’s certainly untamed, and other than its main chord progression, nothing within it tastes like black metal – but that’s the association I have with that style of chord resolution, and it’s most certainly not unwelcome.

Despite the fact that there are ‘hardly any venues’ in Dunedin at the moment, Nicholls feels there are ‘loads of great bands doing their own thing’. Dunedin is also fortunate enough to still have the Crown Hotel, ‘which has been somewhat of the last bastion for local music in Otepoti [Dunedin] since the [iconic New Zealand record label] Flying Nun era of time gone by – never faltering’. The lack of places to play and practise, Nicholls feels, is really putting a damper on the otherwise very favourable situation in New Zealand for live, original music, including funding being available for recording and touring.

Dale Kerrigan’s next release is likely to be even more experimental than noise bitch, with more sound exploration. While bassist Connor Blackie will be looking at using a delay pedal, Nicholls will continue to explore the torture she can put her guitar through – she’s already played around with putting a guitar inside a piano, and a piece where she ‘drilled two guitars together, hung them from a ceiling with chains, and whacked it with a metal rod’. Her next idea is no less experimental – she wants to put a plugged-in guitar through a woodchipper: ‘stay tuned to see how that one goes’!

Although Dale Kerrigan’s Bandcamp profile is quite lean, their Facebook page is very active – I definitely recommend flicking them a like. And, if there are any Kiwis reading this, be sure you don’t miss their next show! You won’t regret going – it’s an experience not to be missed.