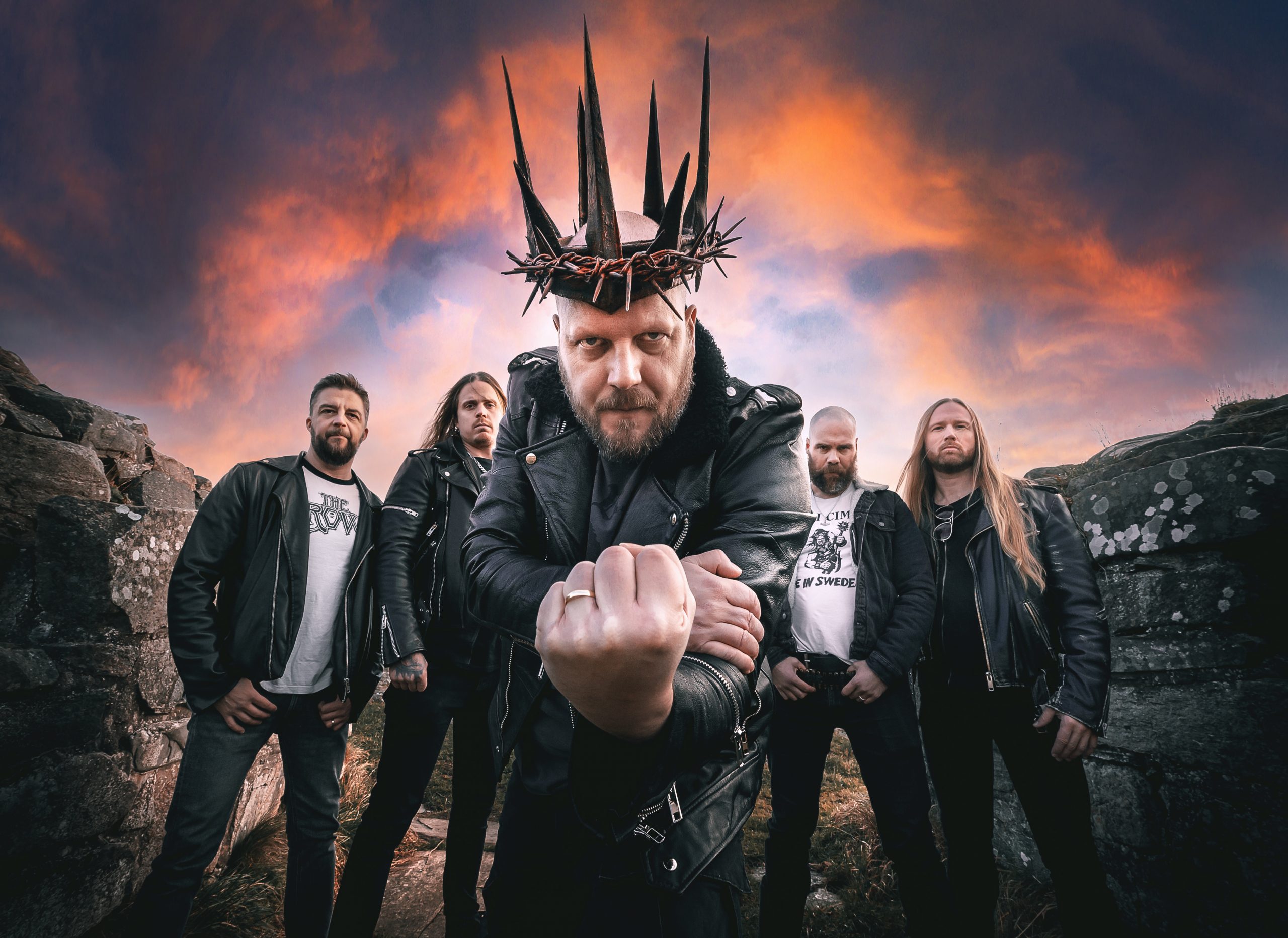 By David RodriguezMarch 25, 2021 No Comments

The Crown really go all out for their tenth studio album, blasting us with their patented take of melodic death and thrash metal while dabbling in similar extremities to spice things up.

If you found this article looking for information on the Netflix period drama The Crown, I don’t know what to tell you, but welcome! Look, I’ll level with you here. Today’s review doesn’t cover the highbrow, cerebral, artistic fare you may be used to from Everything Is Noise. Once in a while, you have to let all that go; put off your search for a deeper meaning in something and just enjoy the moment. That goes for a lot in life, and music is no different. The Crown aren’t here to shake your philosophical core, just the very foundation you stand on. They don’t aim for subtlety or nuance, rather they aim for your head to get the most efficient, bloodiest kill possible.

But goddamn, are they fucking good at it.

I’ve been a fan of The Crown for over a decade now thanks to a friend showing me the first half of their discography when it was still fresh and new. Possessed 13, Crowned Unholy, Deathrace King, it was all flames – quite literally as the Swedish melodeath/thrash group loves to stoke the fires of Satan and other hellish beings in their music. They were quick, they were heavy, they were everything I needed at my late teen age. They were, most importantly for the purposes of this review, also one of the few bands that persevered as my tastes have grown and broadened over the past ten-plus years as well. Naturally, it was with frothing fervor that I anticipated Royal Destroyer, especially after their last album, the wildly titled Cobra Speed Venom.

So, what do you get for indulging these veteran dealers of metal-ass metal? A whole lot of energy. The name of the game is pure, uncut Swedish ass-kickery. Punky drums, serrated and melodic guitars, beastly vocals, and a pace that’s honestly hard to keep up through a whole album – so they don’t. Although you could point to a number of songs across their now ten-album (technically 11 – Crowned Unholy is a reworking/re-recording of Crowned in Terror) discography where they dialed things back a bit and let a more ominous atmosphere take hold, it’s here on Royal Destroyer that they’ve almost perfected a balance of uncapped speed and massive melody, not to mention a tour of extreme metal achieved at the speed of darkness as they are wont to do.

First, the elephant skeleton in the room: “We Drift On”. This is a song billed by the band as the first full-blown almost-ballad of sorts they’ve ever written. You won’t find emotionally crooned clean vocals here, but there’s some pensive guitar, a soft chorus that shows a side of Johan Lindstrand’s voice that we rarely see (that is: not screaming), and some introspective lyrics to tie it altogether:

‘Your distant stars will shine on, forever reminding to hold
Your brightest stars are right beside you, every day, every day until
We drift on
We sail on
We fade on
We live on’

It works remarkably well, offering an undeniable contrast to the rest of the album while still fitting in comfortably due to its heavy riffs and attitude. After all, you can’t expect a band like this to completely abandon their tenets. I respect it. Elsewhere, we find other songs that put down the adrenaline shot and learn to love the melody as well. “Devoid of Light” is true to its name, a downright crushing endeavor with (comparatively) slow guitar work making up about half its length. A true blue death metal anthem that slams. “Glorious Hades” also assaults the senses in a similar manner. Following a brewing storm of an intro, we get a song that puts the ‘melo’ in melodeath with enunciated riffs and a pounding pulse. The varied instrumentation and cinematic feel make it ripe for a high-budget music video (you know, by metal’s standards) to play out its story of fiery conquest.

Don’t worry, fellow fans – The Crown are still The Crown. If you’re here for a ripping good time, then pretty much the entire rest of the album suffices, but it’s far from phoned in. Some of their heaviest and most uncompromising work in years is on here. The first three songs alone offer a triumvirate of supreme pain and speed. “Baptized in Violence” clotheslines the shit out of you with the fastest, shortest track I think I’ve ever heard from them, bordering on grindcore-esque execution. Then comes “Let the Hammering Begin!” with an elbow drop of apocalyptic proportions from the top of the cage right into your sternum. It’s a longer track that really seethes with rage. Finally, the finishing giant swing of “Motordeath” tosses you right out of the ring. It’s the lead single for a reason; it’s a blistering metal jam that’s fast and dirty, average in length so it doesn’t waste any time while still making its statement.

Royal Destroyer ends up being The Crown‘s most diverse offering yet. It’s very clear that they aren’t sick of wallowing in thrashing death, and a lot of us aren’t sick of hearing it either, but credit where it’s due; the quintet take a couple risks here and they pay off! Even if you’re not into it, the effort and power they’ve instilled in the barn-burning thrashers people expect is impressive, eclipsing a lot of their recent work with a second wind of sorts. I’m becoming increasingly jaded with death metal and its ilk, so for me to still hold interest for a band like this speaks volumes, grandfathered in or not. They are among the best as far as I’m concerned.

This album won’t change any minds – in fact I’m sure a lot of readers already bowed out of reading to this point because they knew by paragraph two that this wasn’t for them. Understandable! But those that made it this far are likely curious, perhaps feeling their interest piqued by the songs embedded above, and having fun with the whole aesthetic The Crown bring with them. All I’ll say is, it’s even better than the impression you may have right now. It may not be groundbreaking, but it does shake the earth. Not mind blowing, but head banging. It’s sonic sugar, chaos cake, a brutal baklava, and damn, do I have a sweet tooth. Hail to the kings – The Crown are named as such for a reason.