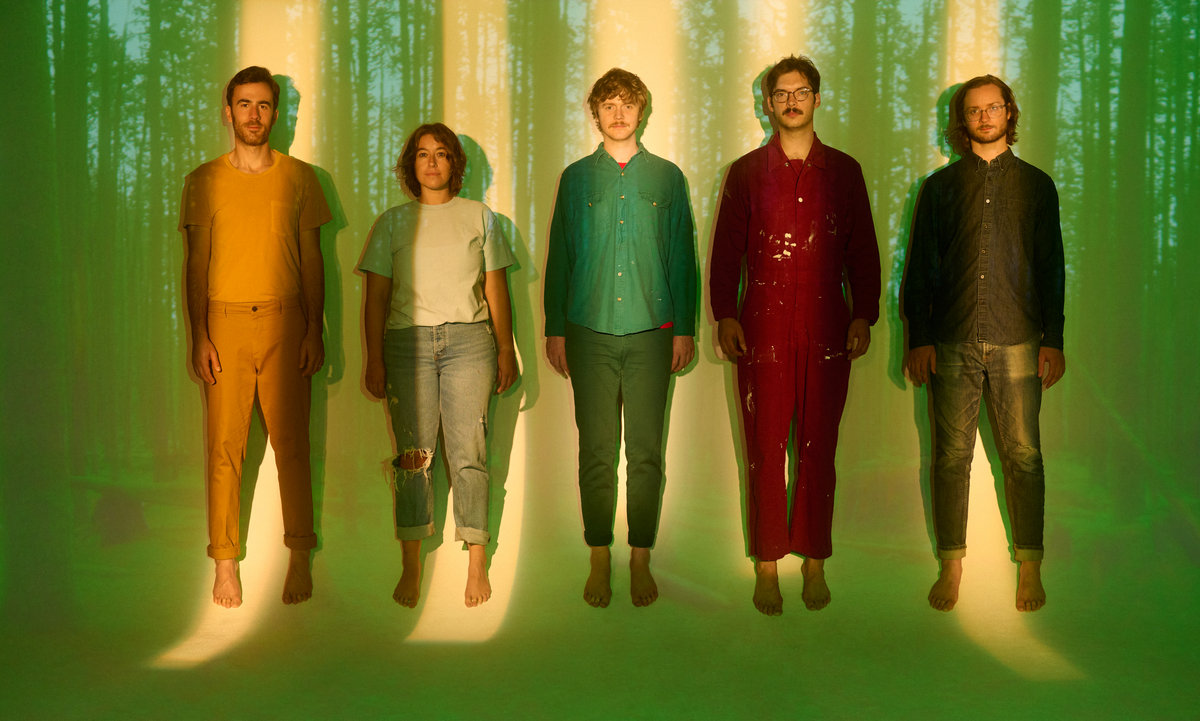 By Carlos Vélez-CancelFebruary 12, 2022 No Comments

11:11 finds indie act Pinegrove at their most confrontational, exposing the frail collective idiosyncrasies that catalyse the decaying of the world, while maintaining the band’s characteristic warmth that is simply unmatched to this day.

There’s a certain, unexplainable thrill we human beings get from looking for deeper meanings in otherwise habitual objects or events. It’s like we strive to reach towards something bigger than ourselves that would consequently impact our daily living in one way or another. Alt country/indie act Pinegrove is no stranger to this line of thinking, be it through their meditative musings that linger much after being exposed to them, or through the symbology found in the band’s imagery – like their geometrically-focused album covers and the occasional use of the ampersand – that further evoke the messages they aim to convey to listeners. 11:11, their fifth studio album, continues treading this same path, only this time there’s an urgency and frustration pulsating throughout the record that finds itself distancing from previous releases, setting a precedent to look for deeper meanings in order to come up with real-life solutions for a decaying world.

Although the topics at hand might not make for a quite easy listen, the trademark Pinegrove warmth is there to lead you through it all regardless. Still, there’s also a different kind of warmth that emanates from this record, and its lead single “Orange” channels it in an obvious manner. Aside from being the band’s most upfront track – detailing the discouragement from the U.S. government’s latency in tackling the wildfires that spread throughout the American West in 2020 – “Orange”, with its throttling, droning pace and persuasive melodies, feels heavy and brooding, precisely like fire smokes persistently roaming around you. It is this particular feeling that is present throughout 11:11, showcasing an underlying grit unheard before, while retaining the heartfelt songwriting that Pinegrove excel at so wonderfully.

‘Last month in Alaska
with the pattern of my life laid out
and I asked what I’d been asking you
like trees repeat, like numerals do
like a ladder to the atmosphere
the rungs each come again and again.

These lyrics from “Alaska”, another of the record’s singles, capture the central theme of 11:11 – seeing the current state of things on a macro scale, or as illustrated in the song, through an airplane window. It’s a constant exercise of looking out while looking in; being a spectator of the ruination (especially environmental) of the world that’s risen from socio-political apathy, a weight that slowly renders you helpless, either out of a self-perceived inability to do something about it or the hesitance from others in joining you in this urgent cause. In fact, this scenario translates very well sonically in an impactful manner, as most of the tracks cater to a reflective stillness that evokes much rumination, with intermittent bursts that signal a call for action.

Album opener “Habitat” transits through these melodic ebbs and flows unapologetically, a twangy slow-burner that, as contemplative as it is, pleads for a sense of drive, only to culminate with an outro whose samples of chirping birds and rustling leaves serves as a reminder of the nature we’re immersed in and depend on. As one could infer by now, nature plays a main role on 11:11, acting as a comforting undertone that not only reinforces the previously mentioned Pinegrove warmth, but also provides a nudge of optimism that strikingly contrasts the otherwise emotional heft brought up by the lyrics.

A song such as “Flora” might be the most obvious example of this emotional duality concerning nature, where the narrator relates how everything feels off whilst taking a stroll in the woods, from the sun sewing ‘red in the grass/with every fiber vibrating alive’ to how the birds ‘sing dissident tunes/singing the sadness afternoon’, only for them to rejoice and savor this present moment by ‘praying now, to the forest, to the flora, to the floor now’. While this track is the most straightforward from the record, song structure-wise, it’s nonetheless just as affecting as the rest of the songs with its spirited drumming and convincing vocal performance.

These anxious thoughts circle around our narrator’s head like vultures, evidently taking a toll on them as depicted in songs like the fantastic country pop deep cut “Cyclone” and the morose balladry of “Let”. You can feel their pain coming from both tracks, yet the breeziness of the band’s stellar songwriting is akin to the feeling of protection from someone gripping your hand ever so tightly.

Speaking of which, there is no song on this album (and maybe even beyond) that is as comforting as “Respirate”. The conversational approach to the lyrics here – acting as a voice of consolation midst the chaos – is truly moving, coupled with the immaculate build-ups joined by throttling guitar leads and an uplifting organ that truly make this song a (much-needed) modern day anthem of sorts. Meanwhile, “Swimming” marks a celebratory moment on 11:11 – a want to remain in presence with nature in a borderline hallucinatory fashion, and could just be one of the most gorgeous tracks Pinegrove has created to date with its stellar use of tension and release.

It’s hard to escape from the harshness of the current state of our surroundings (and the inaction that follows) sometimes, and Pinegrove are very much aware of that. Even with this in mind, however, 11:11 somehow succeeds in voicing out these valid concerns in an equally heart-wrenching, persuasive, and tactful manner. Of course, they have already proven to be masters of crafting songs that are immediately palpable – I just find it impressive how the band has figured out how to balance the heaviness of theses with their remedying, tried-and-true format of soaring alt country/indie; it’s reassuring, to say the least. Pinegrove adds yet another excellent offering to their already-excellent catalogue, showcasing once more why they are a league of their own. I would very much love to see how the band will further roam through these emotional explorations with their established sound on future releases.