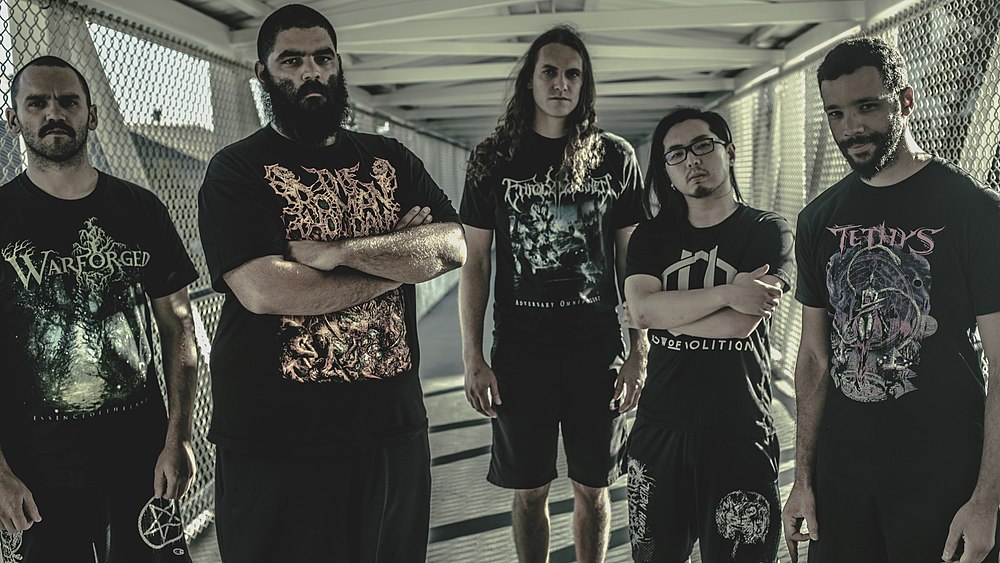 By Tyler KollinokOctober 8, 2020 No Comments

Inferi refuses to sacrifice melody for technicality, allowing the band’s new EP, Of Sunless Realms, to stand out among the crowd.

About a decade ago, I was introduced into the vast universe of technical death metal. At the time, I found pleasure in the virtuosic nature of artists like Necrophagist and The Faceless. These bands showed off their immense talents while also creating memorable and exciting musical moments, successfully combining melody with brutality. As the years continued, I began to fall off the bandwagon of the genre because, in my opinion, many bands began to treat tech death as more of a sport than as a type of metal music. All of a sudden, I was seeing artists focus entirely on speed and the ‘betcha can’t play this!’ mentality. There was no significant content that made the bands unique; it was only sweep picking and blast beats to show off just how fast the musicians could play complex patterns.

You can imagine the childlike wonder I felt when I heard Inferi for the first time. Inferi is an absolutely insane technical death metal band from Nashville, Tennessee that has a firm grasp on making engaging music. While each member is ridiculously talented, it isn’t the primary motive for the songwriting. Instead, the musicians use their abilities to create songs that are melodic, exhilarating, and wildly technical. Inferi‘s new EP, Of Sunless Realms, continues into the territory that the band already worked to build, delivering a strong five-song product that is as destructive as it is impressive.

The introduction to the record is a pretty excellent summation of what is to come. The first track, “The Abhorrent Art”, begins with a clean guitar and a programmed choir to give the feeling of the calm before the storm. Soon, the entire band kicks in for a triumphant entrance with a tremolo-picked guitar and powerful drums. As soon as the vocals begin, all hell breaks loose. Inferi showcases what they are about to deliver within one minute of the first track, but the song continues to grow from there to include even more chaos and vigor. This continues throughout the rest of the EP and involves even more creative moments along the way.

“Eldritch Evolution” is probably my favorite track of the five. It’s just as technical and deranged as the others, but it feels even more crushing. Most of the song is based in 6/8 time, and while it is still wildly heavy, it also contains more of a groove than the other tracks. It moves around between fast-paced blasts of intensity, sections of guitar virtuosity, and tremendously heavy breakdowns. The song is like a clinic on the ways to do technical death metal the right way, as it focuses on content rather than simply showing off skills.

Guitarist Malcolm Pugh also flexes his orchestration abilities to create the incredible interlude track “The Summoning” that leads efficiently into the EP’s single, “Aeons Torn”. The symphonic elements are massive in both songs, but they add an incredibly effective layer to “Aeons Torn”. The track is an outstanding finale for Of Sunless Realms, as it culminates all of the previous successes from the EP without sounding too similar to any other songs. When you reach “Aeons Torn”, you aren’t fatigued by too much wankery or noise because Inferi has represented their mastery of the genre.

Imagine a symphony orchestra performing the transcription of a technical death metal song. If you ask me, Of Sunless Realms could easily substitute the crushing guitars with layers of stringed and woodwind instruments and would still sound immense. Inferi has a proper understanding of creating technical music that doesn’t sound robotic or lifeless, allowing their songs to shine above many of the other tech death bands in the scene right now. This short album was actually a catalyst that has suggested that I return to classic death metal albums I loved from years ago, which has certainly been pleasurable. Although I know that this is only an EP, I still wish the runtime was a bit longer. Regardless, Of Sunless Realms absolutely has me excited for more new Inferi music to arrive.