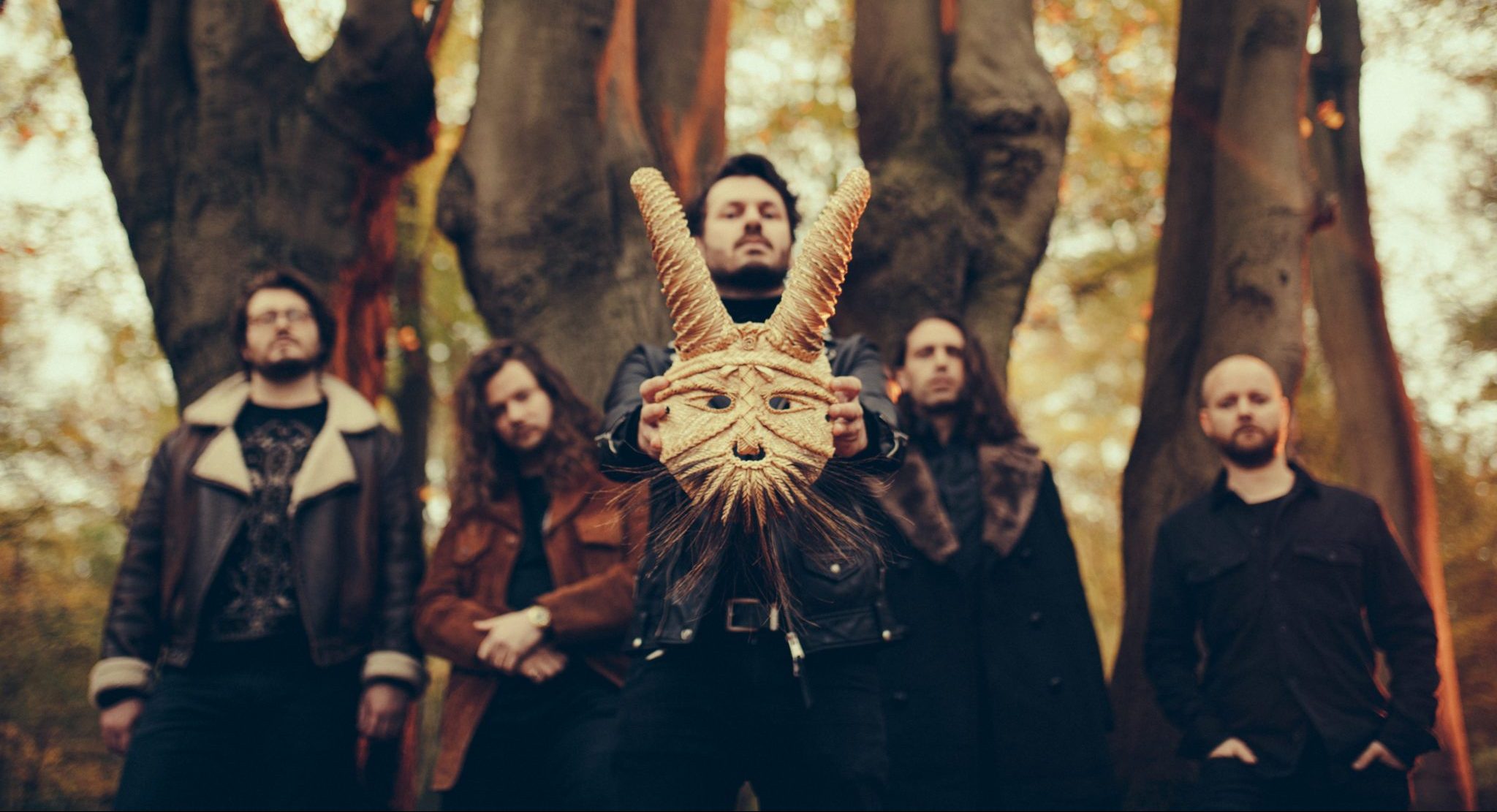 By David RodriguezNovember 22, 2021 No Comments

Green Lung channel horror, occult, English folklore, and – the scariest thing of all – a little reality to craft one of the strongest doom/heavy metal albums of the year.

No new stuff from King Witch or Magic Circle (just found out they broke up last year – that one really hurts) this year means I had to look elsewhere. A few bands with that larger-than-life, stoner, doomy sound helped fill that hole, but none quite so specifically as London’s Green Lung, a band I wasn’t familiar with until this Svart Records release, Black Harvest. They even brought some occult and horror themes with them, things I’m not explicitly into myself, but definitely don’t mind when they flavor the dark mood of music.

To say that I was immediately sold from the one-two punch of “The Harrowing” and “Old Gods” is almost an understatement. After the latter track ended, I had to loop it a couple times, then I click-and-dragged the track over to my #2021 playlist on Spotify, a repository for all my favorite albums of the year. Premature? Yes. Wrong in my early assessment? Hell no.

“The Harrowing” is a hair-raising, masterful intro of a song that sets the tone for the whole album with its organ-intensive bombast I’ve seen a lot of people compare to Boston (a little “Foreplay“, anyone?). But “Old Gods”? What a wonderful, strong track to lead your album with. The opening riff is quite stoned, but has a nice speed to it, making for one of the catchiest moments on the records and there’s still eight more songs! The vocals and lyrics are also something well worth noting – the writing is rather simple, but poetically effective. “Old Gods” is an ode to the heathen religions, the old ways, and to the people that keep those traditions alive: ‘At the sunrise/The stones and stars align/Light up the fires/‘Cause old gods never die’.

Elsewhere, like on the ballad “Graveyard Sun”, is where those things really sink in as well. Based on the local modern urban legend of the Highgate Vampire, it’s a story of doomed love, one with a lot of emotional weight and a macabre tone to it. The acoustic guitars, while maybe a little too on-the-nose for a track like this, nevertheless paint those autumnal colors the lyrics reference into the song itself. It’s beautifully sad, managing to not be cheesy, though even if it was, I like cheese anyway.

‘Autumn girl, lay down beneath the trees
Auburn hair, the colour of the leaves
A little death never hurt anyone
So won’t you come out of the graveyard sun’

Aside from another track that I will definitely be talking about later, every other song on Black Harvest rips. The whole album is just a riff monster, and coupled with the serene organ and deceptively striking vocals, it’s just a perfect recipe for classically-tinged heavy metal. “Reaper’s Scythe” is as sharp as its namesake – singer Tom Templar (a stage name, though I wish it weren’t) even sounds like a young Rob Halford as he belts out the bridge. It has big, splashy drumming and a quick pace, referencing both Children of the Corn as well as another English folk tale. “Upon the Altar” goes full Satanic rite – as you do – with captivating melodies as bewitching as the high priestess in the song overseeing a sacrificial offering to Satan. Being bad never sounded so good, I promise.

The most affecting song, though, comes at the very end of the album. “Born to a Dying World” is without a doubt one of the saddest songs about a climate apocalypse I’ve heard in a while, mostly because it is distressingly possible with our current trajectory. Although it dangles in the back like a hanged corpse, the organ is the star of the show, dribbling out a funeral march for the earth as it collapses in on itself. The lyrics reference rising oceans swallowing church towers with their bells up, rivers drying, forests on fire – even the explosive chorus where the whole band comes in or the shredding guitar solo can’t stave off the hopeless mood for long, though they have a fun-ass time trying. The final two verses are the most dismal of all:

‘They say it’s spring
But here the skies are benighted
There’s no horizon
The seasons they all seem the same
No sunshine, no rain

Can I also just say really quick how well this album is paced? It’s ten tracks split into two sides, 43 minutes total. The first five songs make up side A, and the second five side B. Both sides start with atmospheric ‘intro’ pieces, side B’s being the instrumental title track, and they both end with heartbreaking ballads, with all the metal meat in the middle. Black Harvest is indeed a harvest of expertly crafted music with stellar writing and some of the most impressive performances I’ve heard all year.

The fact of the matter is that if you like bands like Black Sabbath, Rainbow, Deep Purple, or any of the classic doom/heavy metal revival bands I mentioned at the beginning of this review, you’re bound to love Green Lung. Hell, even early Ghost fans will find an abundance of occult, riffy goodness to soak up here. I live for music like this and I’m so glad I have yet another band of this ilk to add to the list of ones to keep an eye on. If you’re looking for good, old-fashioned – but never outdated – fun, you’d be hard-pressed to find something with more confidence or muscle than Black Harvest this year. If Green Lung aren’t the next huge English heavy metallers, I don’t know who is.