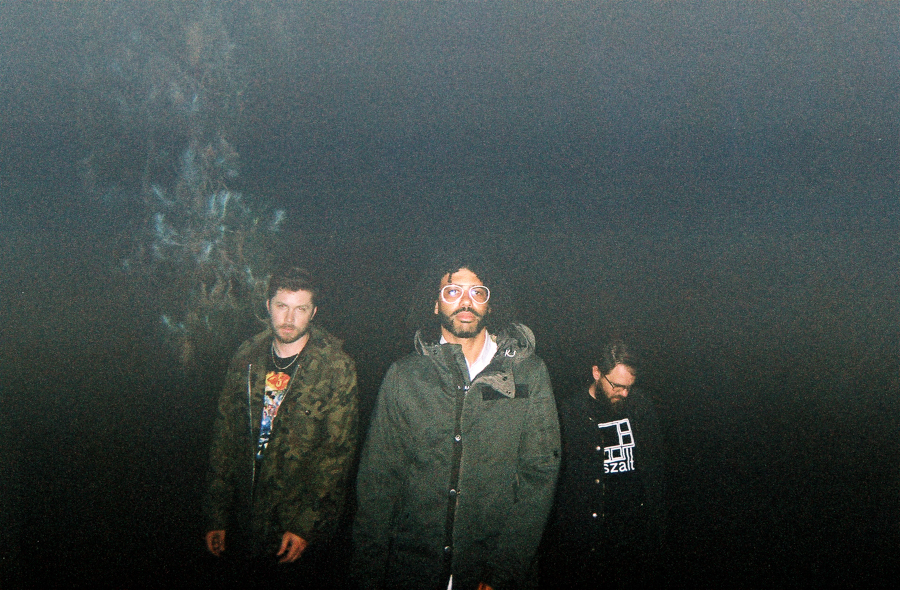 clipping. – “Visions of Bodies Being Burned”

By David RodriguezOctober 16, 2020 No Comments

Turns out whatever possessed clipping. on their last album never left. Visions of Bodies Being Burned is a worthy sequel with a thousand more ways to kill their hapless characters and the rap game they love so much.

I’ve rewritten and tweaked parts of this review more times than I have any other one this year, maybe ever. How was I going to tackle this new clipping. album? My predilection is always toward fuck-huge reviews that cover as many elements of what makes massive music so good and… well, massive. I felt like I was overthinking it – I was. Then it hit me when I heard a song that wasn’t even by clipping., and it’s why I’m choosing to lead with a take so fire, it’ll leave red Flamin’ Hot® Cheeto dust on your face:

What if I told you that clipping. was just as hip-hop as 21 Savage? What about Rakim? Biggie?

I had a sort of minor-league epiphany when listening to the new 21 Savage and Metro Boomin project Savage Mode II (good in its own right, but that’s another article). This song came on and my classic hip-hop loving ass just let out a ‘yoooooooooooo‘ (number of ohs approximate). These dudes was paying homage! Specifically to Rodney O & Joe Cooley‘s “Nobody Disses Me“. Hip-hop is much more than its past, but it’s one of many elements that I love about it. It’s something that clipping. do as well, with absolute class. That’s because clipping. is hip-hop as fuck – they love it, and they’re quick to remind you of that fact in no uncertain terms.

Just in time for Halloween, we’re faced with the sequel to last year’s There Existed an Addition to Blood that I also reviewed. Seeing clipping. tackle horror, a genre I’m not terribly well-versed in, felt so natural, forming unnatural songs and themes that melded that film genre, along with blaxploitation film tropes, with issues of race in society to give it all a momentous feeling that seems to ring even truer this year (“Chapter 319“, anyone?). Where that album zigged, Visions of Bodies Being Burned zags – if There Existed an Addition to Blood was horror, this is more grindhouse.

The references and homage happen before you even hit play. The title of the album, Visions of Bodies Being Burned, is itself a reference to one of the best hip-hop songs of all time, “Mind Playing Tricks on Me” by Geto Boys, a classic that delves into some serious mental health issues like PTSD, paranoia, and suicide that brutal street life can cause. Scarface’s opening bars, ‘At night I can’t sleep, I toss and turn/Candlesticks in the dark, visions of bodies being burned,’ say more about the album than probably any other thing could – the second bar specifically is even sampled for the hook of the first single, “Say the Name”, a song that references Candyman heavily along with Rosemary’s Baby.

Here, the line is a pitched-down refrain that sears into the mind with thick, bulbous bass backing the whole affair up. The whole song drips with nods to hip-hop slappers – ‘The project undone, they jukin’, made you look‘ tips the hat to Nas‘ “Made You Look”; ‘Red blush, lipstick, she just crush a lot/Every pun pales in comparison‘ winks toward Big Pun‘s “Still Not a Player”. Rapper Daveed Diggs has always had a hell of a way with words, whether executing deft wordplay in its own right, or slotting in sly references to the annals of hip-hop or other relevant callbacks. The Candyman vibes are heavy here, mentioning bees, honey, the hook for a hand the eponymous character uses to slay people, and to his life as a slave when he existed as a… you know, not a supernatural murderer.

Just up next in the tracklist is “’96 Neve Campbell”, a fatally hardcore track with Cam & China taking center stage to get their rap on. The song reworks the plot of Scream where Sidney Prescott (played by Neve Campbell, yes, in 1996) gets the upper hand on the Ghostface killer, evading death until the end when she’s able to drop a TV on his head and shoot a co-conspirator, saving her town… until the sequel. Cam & China, two Inglewood, CA rappers I wasn’t familiar with until now, turn the song into a Home Alone-esque lethal trap for their would-be assassin. The refrain of ‘this bitch boss‘ on the hook is brought to life with their penchant for staying ahead of the game and talking wild shit while they seemingly run the whole world. clipping.‘s linked up with other fierce female rappers before like Cocc Pistol Cree, La Chat, and the legendary Gangsta Boo, allowing them to play with power dynamics that often seat them as the apex predator in their stories, and this one fits right alongside those.

For a deeper cut, we need to talk about “Check the Lock” because holy shit, what a track. Again, we harken back to those familiar feelings of paranoia referenced with the flipped Scarface lyric on “Say the Name”, but this goes even further here. “Check the Lock” chronicles a drug kingpin’s obsessive behavior to survive, paranoia from making too many enemies who want him dead, and how he walks a fine line between running the city and being seconds away from a closed-casket funeral. Diggs’ rapping is more straightforward with tight, concise flows and a tempo that ensures you won’t miss a single word, or reference, as he details the story vividly:

‘Never park right outside where he live
He don’t want his ride outside his crib
‘Cause they might roll by, recognize it
And then come inside at night ready to fire with
Guns like he ain’t got none
Joke’s on them when his uzi weighs a ton‘

Kudos to you if you caught the two other classic rap references in those bars. If the song’s premise or lyrics sound a little familiar in general, your thoughts might be confirmed with the final lines: ‘Everyday stuck, keep the heater tucked/They got him sleeping in his chucks‘. Yep, “Check the Lock” is an elaborate, slanted sequel to Seagram‘s “Sleepin in My Nikes“, which Scarface also features on. Though that song is a nostalgic melding of West Coast and Southern hip-hop, clipping.‘s interpretation is a slow burn, incorporating a hard echo for percussive sounds like wood hitting concrete, and a persistent hissing noise that could either be the burning fuse of sanity in our protagonist’s mind, or the telegraphed call of a monster outside his door ready to slay. In clipping.‘s world, either are equally likely, and neither bode well for their characters.

All right, I get I’ve focused a lot on what clipping. have done to respect certain aspects of hip-hop or horror, but it should be noted that they are still hellbent on making their own way. There’s not a single song on here that sacrifices their edge. “Pain Everyday” really impressed me with its production, which is aided by actual electronic voice phenomenon recordings by Michael Esposito and snappy, startling drums. “Looking Like Meat” invites heavy rap laureates Ho99o9 (pronounced ‘horror’ if you weren’t aware) to get downright violent – cannibalistic even – for a track that will make you wonder what took them so long to link up in the first place. Next to “Pain Everyday”, this is probably the most jarring moment of Visions of Bodies Being Burned, incorporating gyrating, buzzing synths on top of somber keys and other stabbing sounds that could very well be an actual knife shot from an amp. Even as a listener, they have a level of immersion that never lets you feel totally safe.

I think more than ever, clipping. have embodied the killer spirit of hip-hop in the last few years. The love they show is immense. They blaze their own trail as experimentalists not because they want to offer an alternative to trap beats, autotune, or opulent verses of money and women, but because that’s who they are as artists, and there’s nothing more hip-hop than being true to yourself and keeping it real. Anyone with the ear for noise and a left-field approach that isn’t already listening to them needs to start – here, with midcity, CLPPNG, wherever. Break out that shovel and dig far enough until you start to feel something. And never, ever assume the killer is dead.

At the end of the day, more clipping. is never a bad thing. Even as a sequel of sorts – a concept itself foreign to the trio and a bit of a hard sell for them – it holds up whereas sequels in movies are usually a death knell for quality. Is it better than There Existed an Addiction to Blood? That’s not really the point. They function superbly well as two sides of the same cursed coin, cleverly bringing an unassailable horror vibe into their music that was always there lurking in the back for years like a snarling beast kicking up dirt to charge and gore us. It almost makes too much sense. clipping. are the best, always outdoing themselves at every pass and that’s all you need to do to succeed in this life. Bra-fucking-vo.