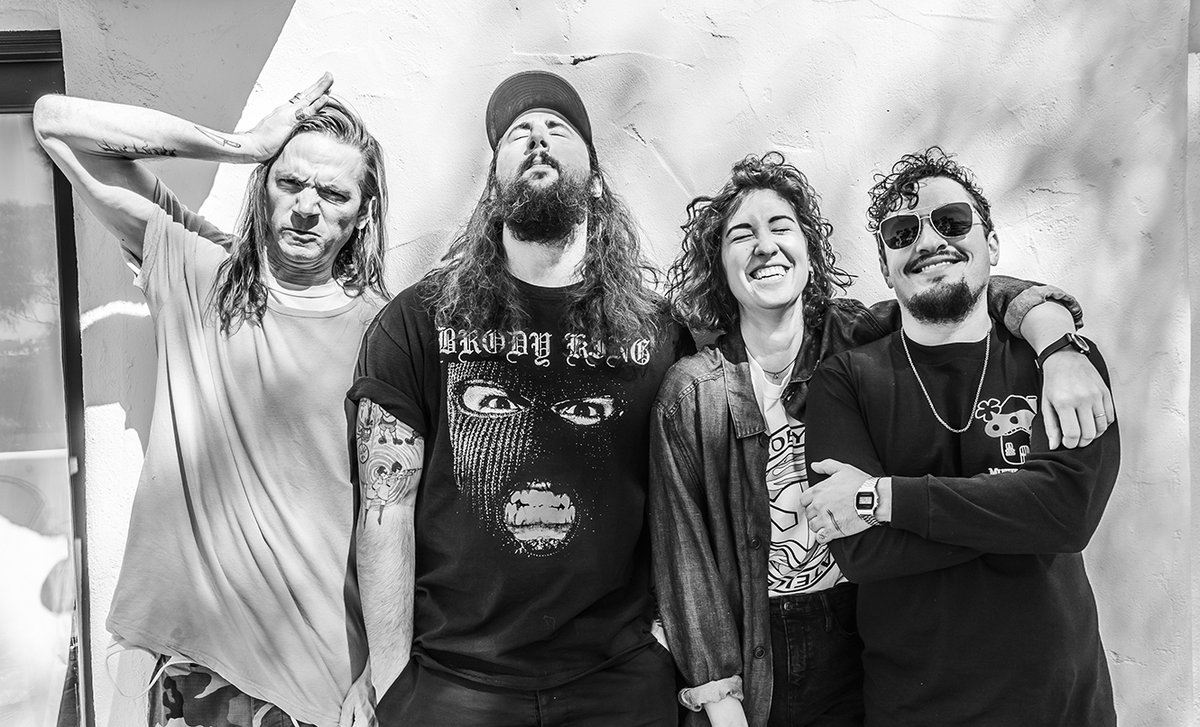 By David RodriguezOctober 15, 2020 No Comments

Melted Bodies take music, inject some candied napalm into it, and rocket punch it to the damn moon, making for one of the most interesting and provocative acts seen in quite some time.

Have you ever wondered what it would be like if Mr. Bungle was co-fronted by Mike Patton and Jello Biafra, but added dashes of DEVO quirk and catapulted it into an irradiated LA scrapyard… in 2020? That’s probably the most informational, succinct, and hollow description I could give Melted Bodies, a quartet hellbent on rearranging both my face and my albums of the year list.

Hailing from the City of Angels, they practically beamed in from a UFO out of nowhere to, if they have their way, alter the landscape of fast, eclectic music for some time to come. It’s really hard to preface a band like this, and nothing I will say in this review will adequately do them justice or prepare you for the utter onslaught of noise and cartoonish zeal they bring with them, so the TL;DR of this review is: just listen to Enjoy Yourself.

As for the long version? Well, Enjoy Yourself is shapeshifting, able to shrink itself down into the most unassuming, invasive forms or erect into an imposing edifice of an eyesore to reflect society’s catastrophic failings back to it. It’s an album just as likely to indulge in dense deluges of thrashed-out mathcore as it is breakbeat-infused synth circus music. As the name Melted Bodies would suggest, it’s a grotesque endeavor you’re embarking on by hitting play, but a hypnotizing one that careens along with endless energy like a nuclear-powered Jim Carrey – nineties Jim Carrey.

The first track is called “Eat Cops”, a tale of a cannibalistic woman that comes across a houseful of chauvinistic cops, and let’s just say our cannibal hero had a hearty helping of pork that night. I feel like I could just end the paragraph there, but that wouldn’t be very music journalist of me. It’s a fucking barnburner of a track, summoning up feverishly eclectic guitars, an octopus to play drums, and the most rambunctious vocals I’ve heard in eons. The heat coming from it practically singes your hair down to the follicles, leaving behind that all-too-familiar burnt smell you can’t shake for several minutes. With every loveable holy shit moment Melted Bodies throw at you, you’re also faced with an equally horrific holy shit mutation that you can’t help but stare at, like a LiveLeak accident compilation video.

I can’t stop listening to this album. Enjoy Yourself is one of those visceral, incomprehensibly good records where each song has multiple parts worth talking about, but to indulge every single noteworthy instant would only serve to numb your jaw more than a back-alley nerve block. But hey, you may need one to survive songs like “Ad People” which is a sputtering derision of positivity culture:

Its porcelain, Stepford Wives-esque mask starts cracking with the straight-faced refrain of ‘I can’t stay positive when the world is beginning to rot.’ The track shows a real-time breakdown of an attitude that values staying positive without acknowledging any problems or realism that’s disingenuous at best, repressive and alienating at worst as showcased in a harrowing and chaotic beauty with the lyrics.

The video is art, taking satirical aim at phony self-improvement ads for products that over-promise and seek to move the needle toward conformist capitalism and social expression – get rich quick schemes, vague fitness techniques, and the like – along with a visual design that mimics YouTube’s banner ads and interruptive commercials to the detriment of the song’s natural flow, but that’s kind of the point. The song’s message of acknowledging the absurdity of *~staying positive~* and unattainable improvement is buried and jumbled by those very things it combats.

“Club Anxious” has another stellar video, presented in the form of a two-hour guided meditation where you’re narrated into a spiritual oblivion by a nice woman before the music warps in to scramble your brain like a fucking egg. It really gives the impression of a person earnestly attempting meditation, likely at the suggestion of an oh-so-helpful friend (anxious and/or depressed people, show of hands – how many times have you been told to exercise or meditate to fix your mental health by your well-meaning, but ultimately unhelpful friends?). Things may go fine for a bit, then the intrusive thoughts and self-doubt trickle in, only with this song it’s in the form of colorful dissonance, lip-smacking riffs, a caps lock scream of ‘feed on the pus, be one of us,‘ and other mile-a-minute musings your mind spits into your conscience. In other words, it’s a total vibe and a banger, so play it loud enough to drown out those thoughts (skip to 3:38 if you just want the song, but trust me, the build-up is worth it).

“99 Scents” and “Funny Commercials (And the Five Week Migraine)” are other songs that seem to take a calculated stab in direction of consumerism and retail therapy; a stab brought all the way to the hilt of the knife when combined with frothing, metallic fury not seen since watershed performers like The Dillinger Escape Plan landed on stages like a neutron bomb. The palette here, though, is rife with additional elements which are seemingly thrown at the wall – not in a haphazard way, though you’d be forgiven for assuming so, but in a forceful, almost malicious fashion. By the time you hit “The Rat” on the latter half of the tracklist, the album is in full rage room mode, with broken glass littered on the ground reflecting light as synths shimmer in the mix, plastic contorting into unmanageable shapes before giving way with a cathartic snap like drumsticks against a snare.

It’s not long into Enjoy Yourself that you start to feel like a Looney Tunes character slammed an oversized mallet into your pale, oily fivehead. Save for the migraine that would surely bring on, your head spins, you see stars, and sounds fade in and out, battling for your limited and waning attention. It’s a very specific kind of functional mania, like a 40-something birthday clown breaking character to gruffly orate unfiltered vitriol and nihilism to children between chainsmoking the Camel Black cigs he got from the 7-Eleven on the street corner where he was forced to leave his broke-down shitheap of a van. That a little more detail than you bargained on? Well, that’s the kind of vividity you can expect to engage with here. Melted Bodies‘ nearly unclassifiable music is a scabbed, undignified analysis of existence with a soft and pretty satin shawl unconvincingly draped over its squirming meat mass (see the album art for a good visual basis for this), eruptive and explosive from having to hold back for years and years while things only got worse.

Melted Bodies are symptoms of problems bigger than them, and Enjoy Yourself is what happens when the simulation you’re stuck in starts to show its seams enough to break the illusion. Sonically, they capture raw entropy and distill it into a galaxy-brained masterpiece that’s as ingenious as it is catchy, with melodies Trojan horsing into your mind only to leave behind immense food for thought and a lot of reasons to send yourself to the hospital from a self-induced neck injury. If you’re not careful, the band will grind you up into soylent, but hey, that’s not the worst fate that could befall your body. Better hope you taste good.