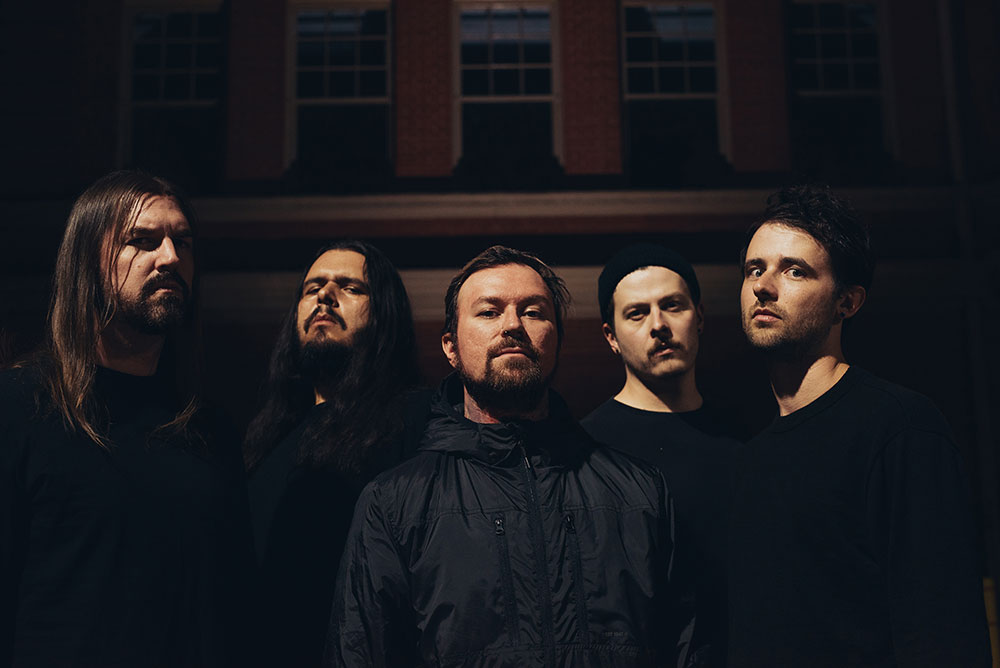 By Landon TurlockFebruary 24, 2022 No Comments

Allegaeon offers their most melodic album to date with DAMNUM, pulling from progressive death metal and classical influences to complement a more accessible vocal approach and style.

Allegaeon have been stalwarts of the American melodic/technical death metal scene for over 15 years. Their classical influences and guitar pyrotechnics have defined their sound for much of this time, but the addition of new vocalist Riley McShane introduced even more versatility to their death metal sound. This is mainly because McShane has an impressive singing voice in addition to some powerful growls. This is evident on the two Rush covers the band has released to success over the past while. Still, his singing has only been an occasional feature on the two previous Allegaeon albums – the orchestral, ambitious 2016 album Proponent for Sentience and the comparatively aggressive, streamlined 2019 Apoptosis. On 2022’s DAMNUM, Allegaeon utilize McShane’s singing as a more central feature of the album while drawing on progressive and flamenco musical inspiration.

Flamenco guitars have been a feature in Allegaeon‘s music for a long while. It is suitably fitting that quiet fingerpicking opens DAMNUM, harkening back to Metallica‘s “Battery”. As the song unfolds, there is a powerful juxtaposition between sections of Inferi-esque tremolo riffage and growls countering McShane’s soaring vocals and nylon-string acoustic guitars. Later, “To Carry My Grief Through Torpor and Silence” takes this influence further with an extended foray into flamenco that would not be out of place on First Fragment‘s most recent record. As the album draws to a close, penultimate interlude “In Mourning” is a fully acoustic track.

DAMNUM‘s second single, “Of Beasts and Worms”, broadens the sonic identity of the album with Opeth-like organs and gravelly whisper-singing, making for one of the more unique elements on DAMNUM. The song later unfolds into more expected Allegaeon fare, with an enjoyably pounding pre-chorus and a hooky, clean chorus. There’s also a suitably impressive instrumental section that commands much of the latter half of the track’s six-and-a-half-minute runtime. The unique and catchy combination of elements makes for one of the stronger songs on the album.

The aforementioned Opeth influence is perhaps even more pronounced on the album’s first single, “Into Embers”. While the song’s intro would not be out of place on a Jason Richardson production, the most notable section of the song to my ears takes place halfway through the song, where the unique baritone harmonies and organ sections conjure an immediate comparison to Mikael Åkerfeldt. Frankly, I was a little bit disappointed that this unique section was kept so short, and would have been curious to hear this unexpected influence explored further. However, “Called Home” again evokes Opeth and fleshes out this sound considerably further, with the stacking harmonies especially reminiscent of “Ghost of Perdition” from 2005’s Ghost Reveries. With the dynamics developed over “Called Home”, from quiet piano sections to doomy half-time riffage over the track’s nearly-eight-minute time, the song makes for likely the most unique and enjoyable song on DAMNUM.

Melodic experimentation is a recurring theme on DAMNUM, as described above. There’s a lovely, extended piano solo on “Blight” that draws comparison to Jimmy Pitts’ work with Equipoise. Elsewhere, on “The Dopamine Void, Pt. I”, the band dives into a short ballad. With soulful guitar tones, piano, strings, and a slow tempo, the brief track evokes Paradise Lost-era Symphony X.

After writing the body of this review, it became clear that much of what stands out to me about DAMNUM is when Allegaeon draw from influences that seem out of their standard approach. This observation suggests a couple of things to me. Firstly, Allegaeon can be commended for expanding their sonic palette in a way that still honors their established sound. However, secondly and most unfortunately, I perhaps find the more straight-ahead moments on the album to be a bit lackluster or immemorable. That’s not to say that DAMNUM won’t be a solid album for fans of the band – between Dave Otero’s excellent production and performances from all members that set an incredibly high standard (most notably from vocalist McShane), this is a solid melodic death metal album, one that stands respectably against their other recent records. I am also intrigued by Allegaeon‘s foray into more dynamic, melodic, and progressive arrangements. I hope to hear the already ambitious group expand their sound further in that direction in the future.