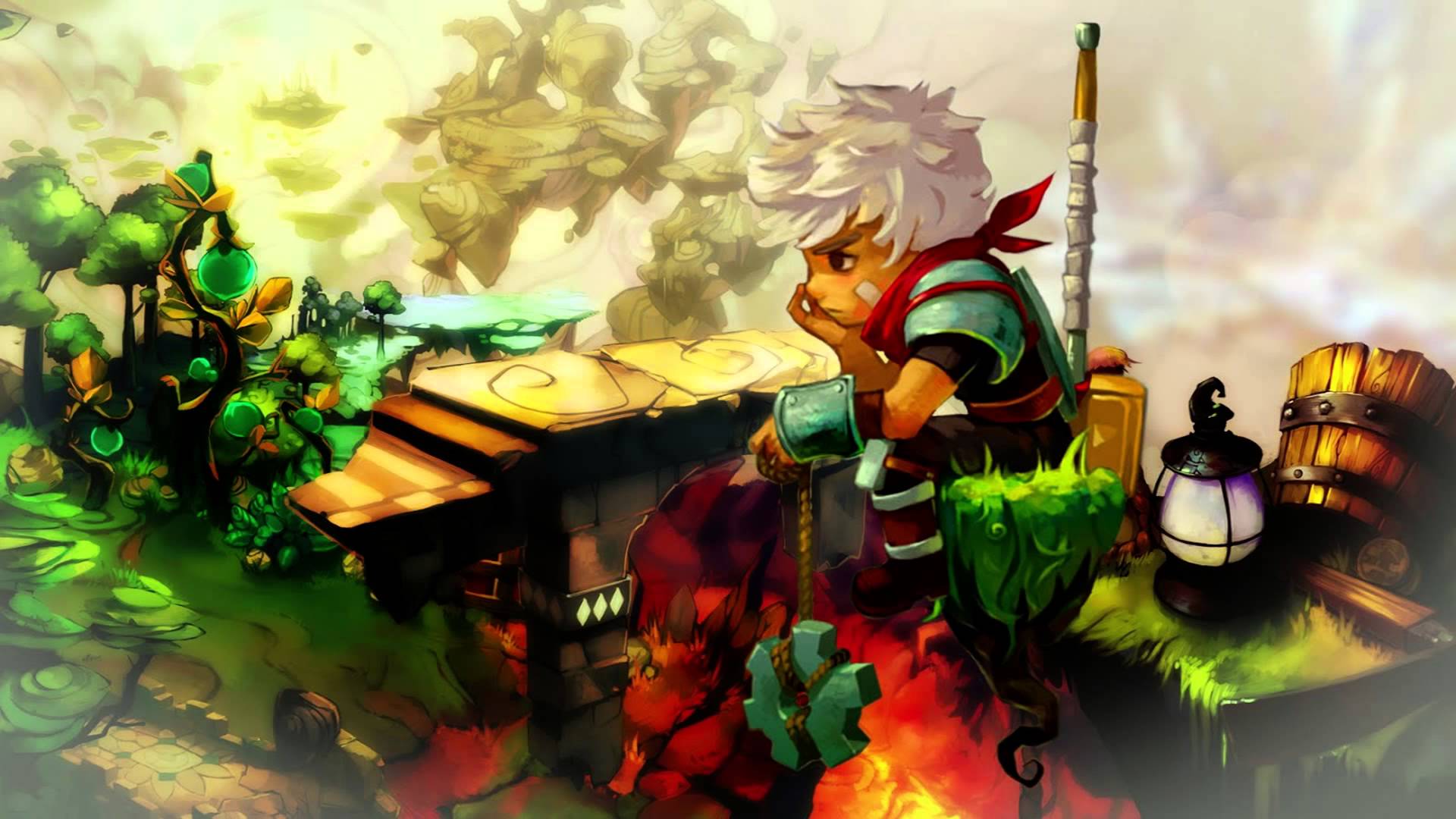 By Tyler CaldasFebruary 22, 2019 No Comments

Welcome to another edition of Sound Test, where we take a deep dive into the world of original soundtracks and the impact they have on the games they come from. From Doom to Nier, Castlevania to Dark Souls, we’ve covered quite a bit of the spectrum so far. What we have not delved into prior, is in the world of indie games, and that’s exactly where we are dipping our toes in today. Enjoy!

Style and craft, this is what comes to mind when taking a lens to the unique signature of music that Supergiant Games have left on the industry. Style in its use of constrained elements to create something large and largely memorable; a distinct sonic palate that is unlike any other in their sphere. Craft in its ability to supplement its chosen medium while standing firm on its own legs. At a time when music irrespective of their games were relegated to a small, budding community, and indie development was not the towering industry it is now, composer Darren Korb was able to solidify his efforts in an enthusiastic introduction when Bastion  hit the scene back in 2011.

And what an introduction it was:

The rolling acoustic progression, punctuated by the bombastic electronic percussion of “A Proper Story” as it follows the narrated “Get Used to It” is striking and memorable in the same way the game was a near decade back. It marks the beginning of the kid’s  journey in Bastion, and the start to a well-rounded catalogue of exceptional music. While acoustic meanderings are the most overt elements of the fore, a healthy amount of electronic compositions and accompaniments take the main stage more often than you might expect. A combination that is novel and undeniably welcome. This is punctuated by a number of tracks that contain vocals, a novelty in the games industry, and another element that would become a signature of the composer.

It’s a credit to Korb’s craftsmanship that he was able to convey so much with so few resources, and little in the way of experience in the field. It would be well-trodden territory to mention the story of how Amir (head of Supergiant) approached Darren with the idea of Bastion, and the prospect of handling the music all his own – a collaboration that continues to this day, as Darren has continued with the growing company as audio director. This isn’t his only role either, with the small company leaning on him as composer, sound designer, voice director, and all jobs that the audio director would normally simply facilitate and delegate. But focusing in on that moment, when faced with this new, daunting endeavor and with no roadmap on how to proceed, the choices made are nothing short of inspired, and the result laid bare. It’s a fine, folk-laden, dense, and thoughtful experience. One, that at least on the surface, smartly contrasts the follow up: Transistor.

Ambient, mournful, and with a bit more overt electronic, this sophomore piece holds its own identity despite growing expectations coming off of the previous release. What might seem different aesthetically shares quite a bit common in the nuts and bolts of the previous compositions. The melancholic undercurrent the pervades each track, pressing against the entrenched, wide lows and lilting melody of the mids. The folky backbone that rears its head only as often as it needs to notwithstanding. A subdued vibrancy to the structures embellishes the dynamics of the range. It often feels as if thematic tone is being played with the left, while the right uses simple melody to drive engagement and pull the listener in. We also get more in the way of vocals, with the emotional performance of Ashley Barrett.

Her vocals add quite a bit of consonance to the narrative of the game, but also give it that needed emotive push to make the larger moments memorable. “We All Become”, as seen above, embodies this idea nicely, and was a great choice to use alongside the initial reveal. You’ll see more from this collaboration as you look at future releases, but you can hear a forty-plus minute, stripped performance of the two from their appearance at 2017’s MAGFest here.

As confidence and experience began to bleed into Korb’s ability, new avenues to create and express his music became evident. A method in the creative process and application for their third production, Pyre, was stem-based implementation. As Darren describes it ‘Basically, most of the pieces in the game have between five to eight tracks that can plan in almost any combination based on player actions’ (source). Think of it as procedural layering, where depending on your interaction with the game, the layers are turned off and on, or are switched to a new track altogether. This allows for more nuanced expression and synergistic design.

The music of Pyre retains much of the folk meets electronic moments that were heavily present on his previous works, but expands this quite a bit. As the game focuses much more on individual characters, individual compositions as reflections of these characters took center stage. Eastern sounding traditional music, harpsichord, and light sampling make their way into the tracks, though a focus balancing between gothic occult and more bardic inspiration are predominant throughout. The stem-based system also impacts the presentation of each layer, allowing for a more open soundstage and easier to parse elements within the mix. The somber atmosphere is retained, but the character focus creates a more diverse listening experience, and each track is more memorable as a result.

Korb, as most musicians and composers do, also occasionally does work outside Supergiant. Some of these manifest as simple collaborations, such as his contribution to Rickety Stitch and the Gelatinous Goo with the track “A Hero in Name Only“. But he was also part of the New York garage rock outfit Control Group. While not as active as they used to be, last year they created an EP for charity with the help of Steve Albini (who produced works by Nirvana, The Pixies, Robert Plant, and many more) titled It’s the Year 2000!. The name of the record comes from a playful retort Steve would reply with during sessions, implying that anything was possible. All proceeds go to funding ACLU research, so definitely take a look if you have the chance.

In many ways, Supergiant Games‘s most recent early access release, Hades, is the culminations of all the lessons learned until this point. The folky, melancholic moments are ever present, but with a bit more of a gritty edge. The electronic is back, used in a growing array of styles, and Darren even contributes some voice work to the game. It also uses the idea of stems in an increased capacity, which I’ll do my best to explain below.

The main compositions of Hades comprise of three distinct and elongated sections. The first is a more mellow synth pad with modular percussion. Upon a progression tag from the game, it will switch at the next appropriate beat marker to a lengthy acoustic/Mediterranean version of the melody. When a mini boss or boss appears, the set piece triggers a hard rock variant with more aggressive drums and an electric guitar. Finally, once the set piece ends, there is a crescendo that completes the melody in a satisfying way, and a new track begins. These sequential stems are supplemented by parallel stems that react to the game world. For example, the mellow synth will be isolated until enemies appear on the screen, at which point the percussion will appear. The composition isn’t fully completed yet though, as pieces will be added to the game while work continues through its year-long early access period.

With the community surrounding game soundtracks and indie development more pronounced than it was all those years back, Darren’s work has had the chance to reach a larger audience than it normally would have, and the future of the small indie company is a bright as it ever was. I personally want to thank Darren Korb for taking the time to sit and talk with us about his music and his craft.

You can listen to all of Supergiant’s OSTs – including The White Flute rendition of all of Pyre‘s music – on their Bandcamp and Spotify pages. Be sure to listen to Darren’s catalogue with Control Group outside the gaming sphere, and keep up to date by following his Twitter and Facebook pages. Moreover, if you’re in a gaming mood, you can check their games out on their website (including links to various platforms). Until next time!