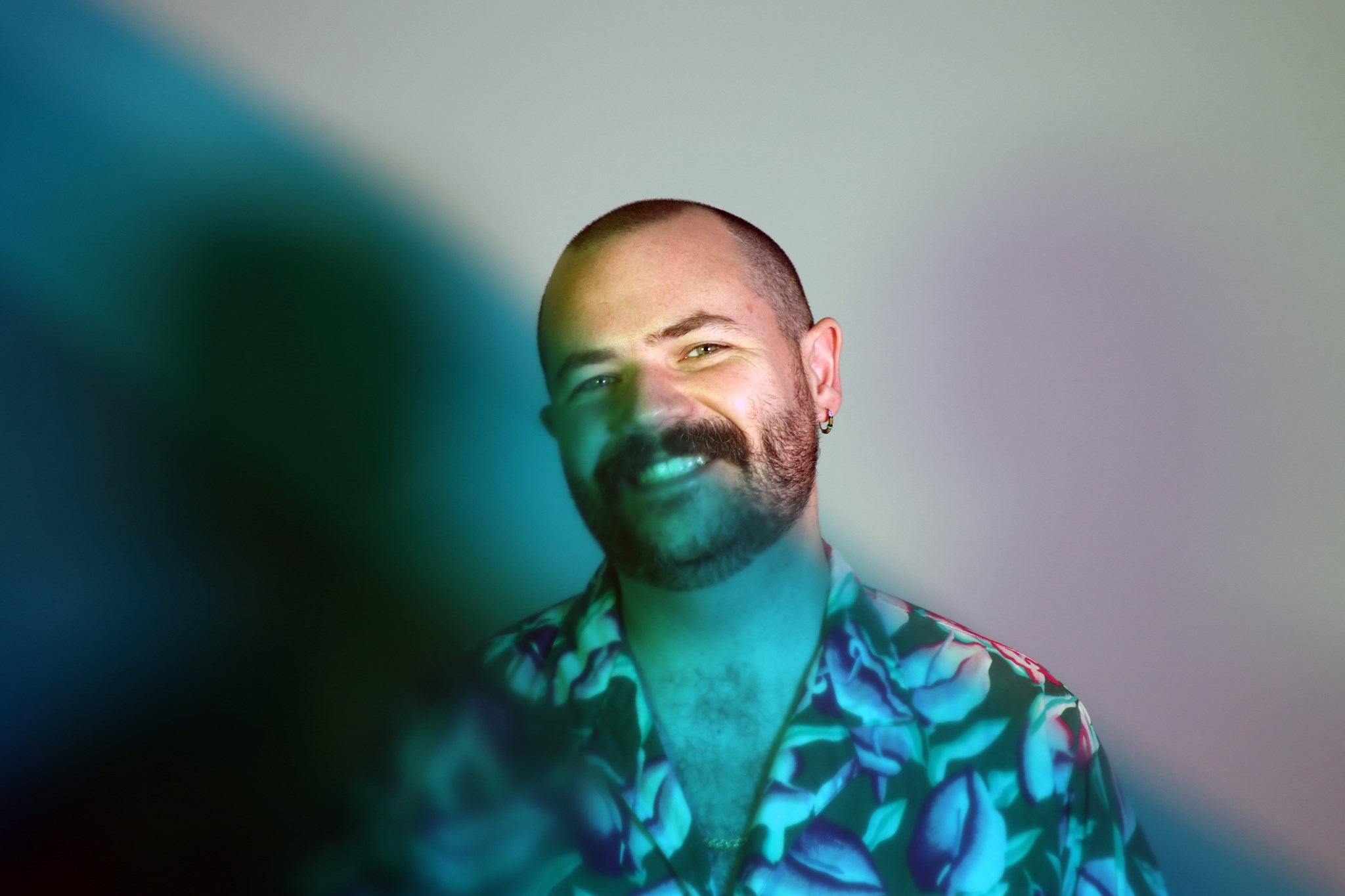 By Dominik BöhmerJune 7, 2021 No Comments

Tell me, how often do you come across exactly what you need when you need it while hunting for new music? It’s not every day that you just happen to find whatever scratches your one particularly pressing itch at the exact time it needs scratching. Even in the internet age, where all sorts of information and entertainment are literally at our free disposal, it’s a rather elusive occurrence; after all, not even the best algorithm or the most well-curated list could hope to match our every craving at any given point in time. Sometimes, though, all it takes is a well-placed recommendation from a friend to give you that little kick of serotonin you’ve been chasing after. And that, my friends, is how I found out about Ben Seretan.

Seretan has been making music under his own name at least since 2011, releasing a small smattering of EPs and collaborations before putting out his self-titled début full-length in 2014. Since then, he delivered another handful of stand-out releases, the latest of which is this year’s ingenious Cicada Waves (more about that here). His output alternates between ‘big, chaotic indie rock records and more interior, softer instrumental music’, as he puts it. As to why he chose to not use a stage name and go by his own name instead, well, I’ll let Seretan explain that himself:

‘I wanted there to be as little artifice as possible between myself, the sounds I was making, and the audience. Using a band name or a pseudonym for that seemed like a big obstacle! I started off playing solo electric guitar with a little singing on top, trying to minimize the amount of studio trickery that might have made those first few EPs sound better. But I was really interested in the idea that I was just a person, not so different from you, doing something at a very short distance from where you are. I didn’t even want to use any pedals at first! Just wanted my guitar to go straight into the amp – I would have plugged it straight into people’s hearts if I could have.’

Coming back to the present day, his aforementioned Cicada Waves album is one of the absolute highlights of an already stacked year. It’s a beautifully minimal record, based around single takes of Seretan’s solo piano and outside noise that happened to be recorded while he was playing. To me, it’s one of the very few albums that come close to capturing the same feeling as Satoshi Ashikawa’s Still Way, and if you know me, you know that this is not a compliment I dish out lightly. Seretan himself shortly described the recording process as follows: ‘I got to experience some moments of peaceful acceptance and it felt right to share that with a slice of the world.’

Going a bit more in-depth, he offered some more insight into what happened during his residence in the Appalachians:

‘I was offered two weeks of near total social isolation in the woods of Georgia last summer. There was a grand piano where I was staying. I had a lot of ideas about how I’d spend the time, but when I heard the cicada wings that were trying to lift the building off the earth each night I knew I’d never do something greater than what was already there.

‘I never really meant to turn these recordings into an album – they only became a record when I listened to what I had captured, weeks later, thinking I’d have to mix them or sample them or otherwise transform them. But the work was already done! Simple!’

Due to the inclusion of seemingly random field recordings, I felt like the main theme behind Cicada Waves was giving up control and allowing yourself to be fully absorbed by the moment. Imagine my surprise, then, to find out that this wasn’t the case at all – quite the opposite, actually.

Everything Is Noise: You said that for the recording of Cicada Waves, you ‘threw open the windows and let the world in‘. How did it feel relinquishing that much control in order to fully capture the at times random sounds of nature happening around you?

Ben Seretan: Well interestingly I only recorded the tracks when I found the sounds interesting, so there’s actually a tremendous act of curation and editing happening – it was kind of like, wow this thunderstorm sounds incredible, I better run over to the piano and flick on the recorder. But I certainly missed some great sonic experiences while I was out for walks or while I was sleeping, so there is a randomness to it.

That’s why I’ve been trying to use the phrase ‘encountered sound’ when I talk about this record – they’re not field recordings, per se, and they’re not ‘found sound’. They’re sonic textures I happened to live through, experiences I happened to record.

But in general I love chaos and have transformed greatly as a musician in the last ten years or so – when I first started out, I really wanted total attention and engagement, I wanted a pristine sonic environment in which to do my work. But now, to a certain extent, I welcome in chaos – in 2019 my two buddies and I played a show next to a carousel loudly playing pop music in the middle of a plaza in Switzerland – totally laughable cacophony – and it was honestly one of the deeper musical experiences of my life, haha.

EIN: Would you actively invite that sense of unpredictability back for future projects, or do you feel like it should always depend on the circumstances of each individual recording session?

BS: I’ve wondered about this because truthfully? I would love to make a life out of playing beautiful pianos or other instruments in unusual sonic settings. You have an upright in a barn? Let me at it.

But more seriously, unpredictability is the deepest, truest essence of music. If there isn’t an element of discovery or exploration or serendipity in what you’re playing or recording, I really wonder what the hell it is you’re doing. It’s always a slightly miraculous surprise, there are always unplanned circumstances, and the unplanned circumstances are truly what it’s all about.

One of the things Seretan has been missing most because of the current circumstances is actually getting to work on his music with other people. Despite the fact that Cicada Waves was an entirely solo undertaking, he prefers having other musicians in the room to bounce his ideas off of: ‘I would give almost anything to be in a crowded recording studio with a group of true buds again. As much as I love working on my own stuff and get a lot out of it, it simply can’t compare to the thought of hugging friends in between takes.’

Perhaps it’s unsurprising to learn, then, that even his worst experiences as a musician sound kind of enticing to him right about now, going as far as to say that ‘I would GLADLY play the worst of any show I have ever played over again just for the chance to play a show.’ Elaborating further on that train of thought, he mentions that ‘even my darkest, most sleepless and most underpaid terrible crash pad situations sound like literal heaven to me in this moment.’

He’s had his fair share of wonderful moments throughout his career thus far as well, though, even if he finds it hard to recount them; it’s ‘a bit like staring into the sun’, as he puts it. What did come to mind was an assortment of memories like organizing shows in his living room in Brooklyn, playing at a roller rink his friends installed in a Queens art gallery, as well as meeting his friend, the Italian musician Andrea Pomini on tour and later performing a set of Prince covers at his wedding. Interactions with fans of his work also rank high on his list of favorite moments: ‘Anytime someone emails me to tell me they dig my music feels like the utter joy of my life.’

As always, I would like to close out this article by yielding the stage to our Weekly Featured Artist themselves. When asked if he had anything he would like to say to our dear EIN readers, Seretan shared a few thoughts that I’m sure will resonate with many of you reading this.

‘I want to say this, which is something I’ve been saying to a lot of people:

‘We’ve been given a really amazing opportunity in this moment to do things differently. We don’t have to default to the same algorithmic, corporate-dominated power structures in music and in other places. The virus burned it down and we can build it back better: more inclusive, more local, more attuned to the struggles of disenfranchised folks. We can refuse to buy things through Ticketmaster, we can make our own meaning, we can consume less conspicuously. Gathering folks together is the reason we do anything, let’s keep that at the front of our minds as performances and concerts and tours start returning.’

If you liked what you read and heard, I would strongly advise you to give Ben Seretan a follow on social media (Facebook | Twitter) in order to keep in touch with him. You can also head on over to his website, where he offers even more information about himself and his various endeavors, including custom recordings and his label Whatever’s Clever. His music can be streamed and purchased over at Bandcamp.