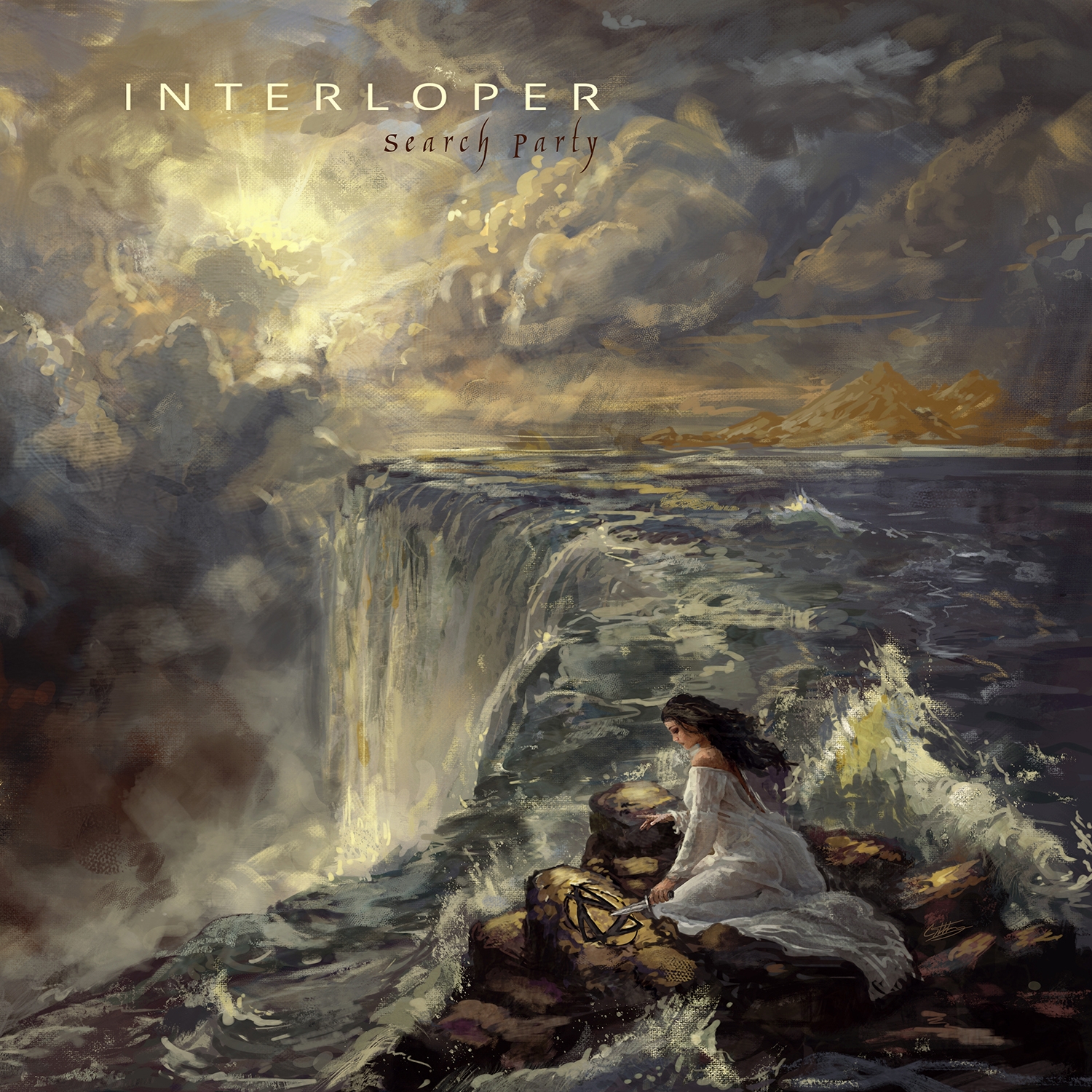 I was recently going through some of Nuclear Blast’s uploads on YouTube with a friend, and we came across a song called “Search Party”, by Interloper. We both thoroughly enjoyed the riffs, but neither of us were blown away by the band until we saw a guitar playthrough of their song “Drift” – holy shit, these boys can play! I was pleased to discover that both of the songs we listened to had been released as singles for Interloper’s upcoming album, also named Search Party, and snapped this up as soon as I saw it on our review list. I have a lot to say about it this album, so bear with me. I will say right now that I think the album is fantastic, and, even though this will read like a very critical review, the only reason I’m critiquing so hard is that while I adore it, it just missed the mark for me on a few fronts.

Even though I’ve heard Search Party many times now, I still don’t think any song on it surpasses “Drift”. It’s just super fun – catchy, riffy, powerful. I don’t even mind the synth layers (If you’ve read some of my other reviews, you’ll know my stance on synths by now!). It’s just four minutes of all the best parts of modern prog guitar playing, vocals that mimic Gojira in the best way possible, lovely chords, and wonderful production. I woke up the night after I first listened to Search Party all the way through with the chorus riff playing loud as fuck in my head, and I can’t say I minded.

Coming from a background of dirtier prog, Interloper’s meticulous, ‘squeaky-clean’ prog sounds like a dialect to me, and I was unsurprised to discover that I found it hard to get into some of those very modern parts of their sound. I’m used to hearing and playing a different ‘dialect’ of prog, but as with dialects in language, the more I listened to Search Party, the more I understood, until, even though I wouldn’t be able to speak it, I could clearly understand what they were saying.

I think a big part of this ‘dialect’ that I initially found hard to get past were the vocals. The awesome guitar playthrough of “Drift” had me set up to love the instrumental side of Interloper, but I found the change to hearing this song (and all the others) with vocals a little jarring. And the vocals are really good – he can sing and growl just fine (and the fact that he plays guitar as well only makes both things more impressive) – but I found them overbearing initially. It seemed like every cool riff the band had was tarnished slightly by the distracting vocals over the top. I know this is completely personal preference, and someone else may see it totally differently, but I struggled with it on my first few listens of the album. Gradually, though, my perspective shifted; I started enjoying certain vocal moments, and began to see the vocals more as just another layer of Interloper’s sound to discover.

Further, as pristine and huge as the production on Search Party is, I found my ears tiring of it about halfway through the album, so I wasn’t really able to form an opinion on its final five tracks until I listened to it starting from the halfway point – my brain was just too saturated by all the whammy bars, huge drum sounds, and massive synth pads, it was all so bright and intense. Maybe that’s part of the reason why I don’t feel the second half of the album slaps quite as hard as the first – the immensity of the production simply becomes overwhelming. I also feel the production doesn’t do the softer parts of Search Party any favours, like in the gorgeous clean breaks on the title track. I feel like Interloper were trying to create something fragile and intimate, but the weight of the production just didn’t allow that to happen – but maybe I’m getting a bit nit-picky here.

I also think the record is just a bit too long. I think Interloper could easily have cut at least one, if not two or three songs. Their cover of Duran Duran’s “Rio” at the end, for example, is absolutely fine and a wonderfully executed rendition of the song, but quite unnecessary after 50 minutes of intense riffing. There’s enough catchy stuff on Search Party already – I’ve never understood ending an album on a cover and I guess Interloper haven’t given me a reason to change my mind about that.

All of this having been said, there are still moments and ideas in the second half of the album that are absolute gold – the back-to-back solos on the somewhat Viking metal “Idle Years” are to die for, clearly showcasing the two different guitarists and their styles. It’s something I’ve been very drawn to ever since I first heard Carcass’ Surgical Steel, and is one of my favourite parts of Opeth’s sound, too.

One thing I really enjoy about Search Party is how effortlessly and imaginatively they navigate so many different kinds of prog. Initially, I found their leaps from the ultra-modern, to the Opeth-y, to the borderline symphonic, to what can only be described as prog-pop-punk-meets-metalcore on songs like “The Wishing Well” a bit confusing, but the more I listened to the album, the more I came to appreciate how adept Interloper are at portraying all of these different styles. It certainly helps their sound never become stale or formulaic, and leaves every song as a surprise in its own right. And, even though some of their influences are quite obvious, I never feel like they’re ripping anyone off – their sound remains uniquely theirs, no matter who they seem to be paying homage to.

On the whole, Search Party is an extremely strong album, and one that I can see myself growing to like more and more with each listen. Interloper certainly are not at a loss for great musical ideas, and I can only see their sound becoming stronger from here. This power trio is a force to be reckoned with, and I have nothing but respect for what they do. What a fantastic album – make sure you secure yourself a sick coloured vinyl of it here.