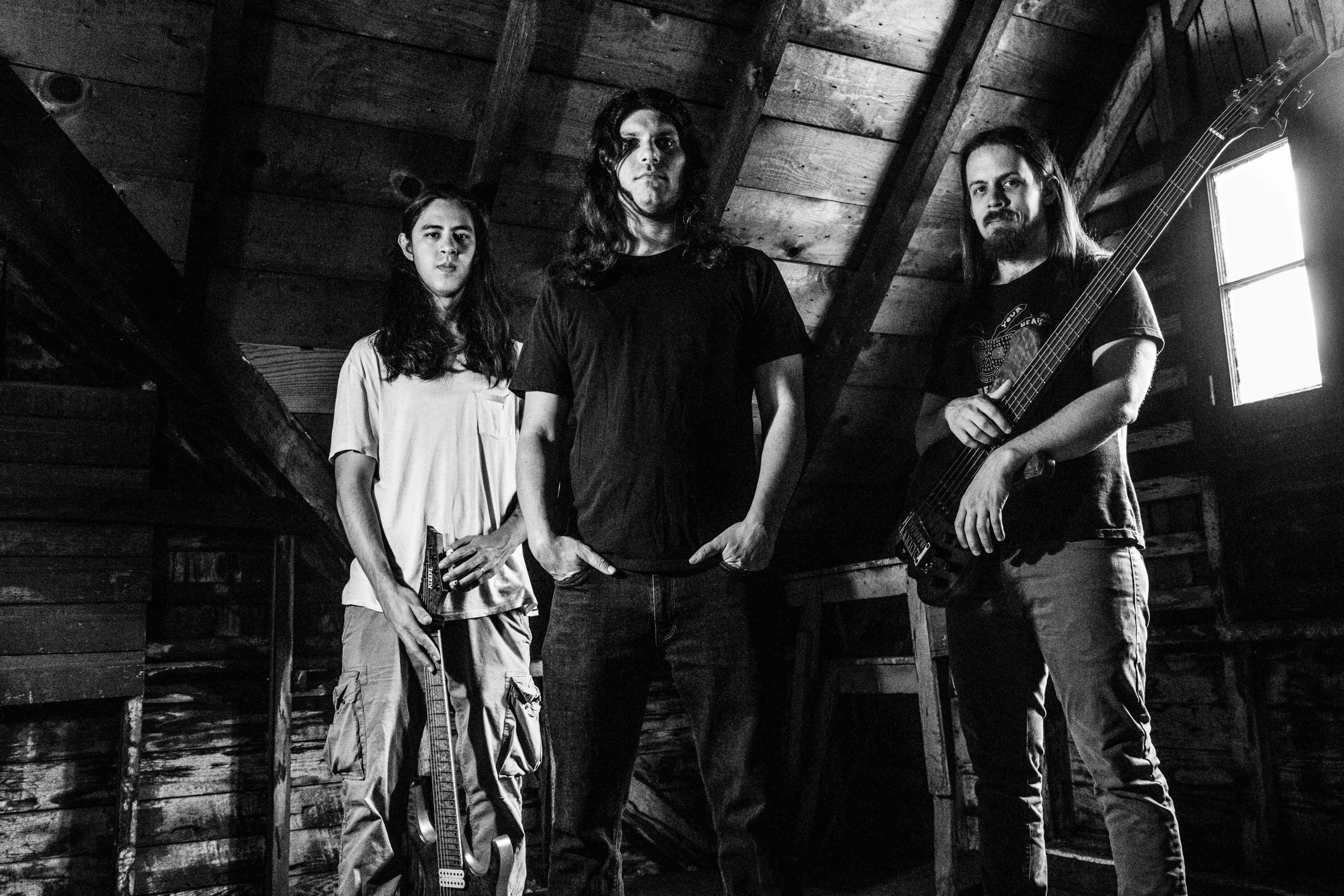 By David RodriguezFebruary 7, 2022 No Comments

The WAIT is over, it’s time for The End of Noise – listen as seasoned proggers amalgamate much of what’s great about prog metal without any excess to speak of.

WAIT… this isn’t the end of Everything Is Noise, just The End of Noise, the debut record of prog metal trio, WAIT. Headed by guitarist/vocalist Max Phelps (Exist, Defeated Sanity, ex-live member of both Death DTA and Cynic), that’s likely enough for those in the know to recognize not only the talent at hand, but also the fact that this band can emulate both Cynic and Death‘s styles to a degree. But Phelps nor his pals (Charlie Eron, guitars; Alex Weber, bass, also of Exist, Malignancy, Svengahli) aren’t here to simply emulate, rather they seek to carve out their own piece of the prog pie, and boy do they.

WAIT is actually an acronym, standing for We Are In Transit and keeping that in mind throughout your listening experience is a great idea. The End of Noise is a very propulsive album, showing signs of influence from some of heavy prog’s great like the aforementioned Death and Cynic, but also some shades of Weightless-era Animals as Leaders, any era of Meshuggah, and more. Again, it’s not like this is a cover band – what WAIT do is smart, taking what may be familiar to some and push it further by combining a lot into a little without becoming disjointed or overwrought.

It took me about a loop of the album to really get into it all, but after that, it was smooth sailing. I was entrenched in the progressive groove that songs like “Lone Presence Supreme” and “I Climb Downhill” had. It just felt so kinetic, electrifying in a way that progressive metal seems to have lost as of late. It shouldn’t be as surprising though – here’s a band with a guy who’s played with/in tribute to two of the most celebrated metal bands of all time.

Not to mention it all sounds immaculate. Every instrument is on full display here, not a single one buried or overtaken by another. While there isn’t a drummer within the band that I know of (likely programmed on this album), there’s still a snappiness to them. Bass is outrageously prominent, making the most of that spotlight with intense, meaty grooves. Guitars, ever the star of a prog affair, shine bright through endearing solos and dense melodies. Vocals are, as they often are, twofold: clean and harsh. Cleans are quite so, enunciated well and have layers within themselves; harsh vocals are empowered and throaty, often sounding quite Schuldiner-esque and therefore familiar and nostalgic.

The End of Noise is as cataclysmic as one would expect from the name. It feels final despite it being a debut album, every song swinging an unwieldy weight around as if to knock the support beams down around you and level the entire place. It’s all implied by the atmosphere just as much as explicitly spoken by the heavy instrumentation and shredding vocals. Even the introduction of “Half Funeral”, a mostly instrumental track, is immense, feeling like a journey in and of itself with fully-featured and realized ideas that get greatly expanded on throughout the rest of the album’s almost 52-minute runtime.

This just makes me excited again. I love hearing songs like “Earth’s Last Orbit” and immersing myself in the musicality at play, vibing with the elaborate sound and loving execution that shows WAIT as a fan of the craft as much as a practitioner, and a vastly creative one at that. It’s fun, it’s entertaining, but it’s definitely not meritless or gaudy as a result – prog needs to learn to have fun sometimes, but if you can do right by its explorative, opulent nature and execute it in a way that’s fairly approachable and pleasing all at once, that’s a hell of a win. Great stuff, and well worth the trip.