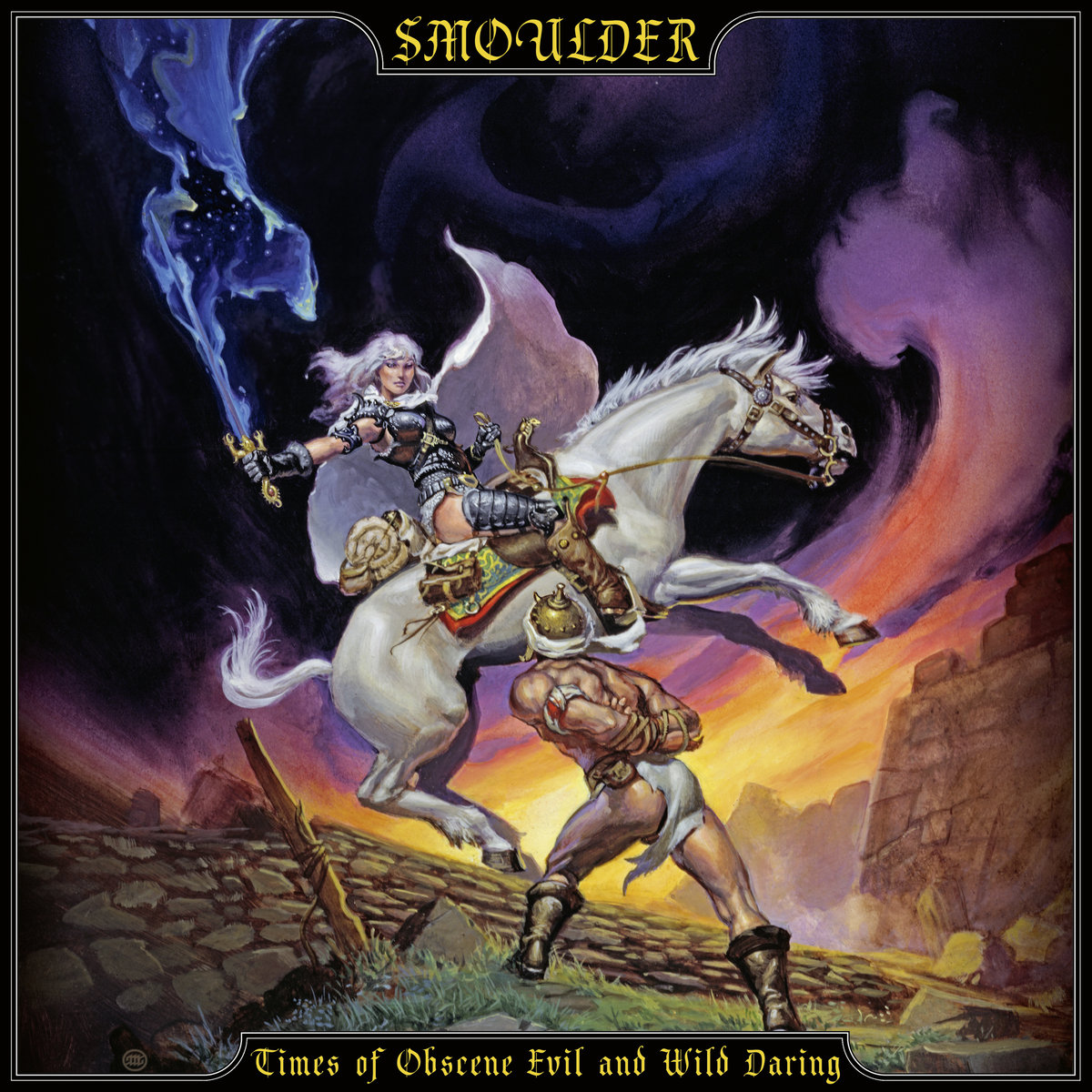 By David RodriguezApril 25, 2019 No Comments

In what could easily be the catchiest D&D campaign audiotape, Smoulder launch an epic doom metal debut worthy of hours of listening.

As much as I love nuanced music that offends the very notion of genre, I always find myself coming back to classic heavy metal every so often. It’s times like this when I really cherish strong newcomers with a great appreciation for that sound like Smoulder do. If you wish to define them, they play an epic form of doom metal that’s just as much a fun throwback to metal-ass metal, as it is an earnest modern interpretation of that old music done by well-learned superfans. Make sense since their vocalist, Sarah Ann, is the resident classical doom/heavy metal expert over at Banger TV. Regardless, though, this shit slays.

Taking influence from not only other fantasy-oriented bands, but also pretty much any well-known story where someone has a sword and/or an overgrown lizard and uses it in threatening manners, Times of Obscene Evil and Wild Daring is six songs, not even 40 minutes, all as powerful as an elder mage’s magic. In going along these well-trodden tropes, Smoulder find subtle ways to flip the script a bit in empowering ways. Even the album cover (done by Michael Whelan) carries an air of subversion, hoisting an armored lady on top a rearing horse, while she brandishes a radiant sword that must give +10 to your badass stat and a passive ability that gives you an aura of fear. A barely clothed and partially bound man stands under her, looking up as if to beg for his life or for help, though neither will likely be heeded from the battle-ready woman, who may very well be totally committed to giving him a haircut with that killer backswing. Better luck next time, guy. It’s a wildly colorful statement and a great primer for the music seeing, as it’s basically something that would be on an old edition of a Dungeons & Dragons handbook.

Each song has its place in the story that Smoulder weave, but the binding agents are most important. Guitar tones are classically heavy and gritty, like a broadsword streaked with dried blood from a recent battle (clean that off – it’ll degrade the steel!). “Bastard Steel” is a quick-witted storm of a song loosely based on Game of Thrones. “The Sword Woman” is a track from the band’s 2018 demo, but its rough, jagged corners have been sanded down considerably, not to mention Sarah Ann’s vocals (both performance and production) have improved immensely. Here with this update, Sarah truly embodies the eponymous Sword Woman. She impresses even more elsewhere, reaching the tops of her register on “Shadowy Sisterhood” and its tale of occult sacrifice.

“Ilian of Garathorm” is one of the coolest songs I’ve heard this year. It’s so tight and profoundly epic, a near-perfect album opener. The intro is a fitting buildup with doomy riffs, multilayered synths, and melodies aplenty, drums galloping in the back like warhorses. Verses, pre-choruses, and the hook itself each have their own distinct harmonies and they all have staying power more immense than a witch’s curse. I want to sing along with Sarah Ann when she belts out the lyrics. The only dark spot on this album I can even think of is “Black Gods Kiss”, which is a little anti-climactic instrumentally. The vibe fits the album well and leans hard into the doom aesthetic, but I wish there was more breadth to the first two-thirds of the song (which is nine minutes long total, so two-thirds is a decent chunk).

I can’t help but think of the wonderful Khemmis mere miles away from me in Denver, and what they’ve accomplished as powerful voices (and amps) in the heavy doom scene. But where Smoulder have Khemmis beat at least for me is their epic tones are already well-forged over a much shorter time. I imagine the members of this band are quite busy with other endeavors and life’s preoccupations, but I really do hope they stick with building Smoulder into an (perhaps oxymoronic) underground household doom name, because based on this brolic debut, they have the chops to go quite far.

I love this shit so much. I live for the epic feel of this album, the vocals are so strong without sacrificing a little charming roughness to them, it’s replayable ad infinitum thanks to its shorter length and tight composition. Everything just adds up to a wonderful time with Smoulder, even with its mild flaws. When we find ourselves in times of obscene evil, wild daring must be exhibited to push evil back and that’s something this album does both explicitly and implicitly with its inspiring, larger-than-life sound.