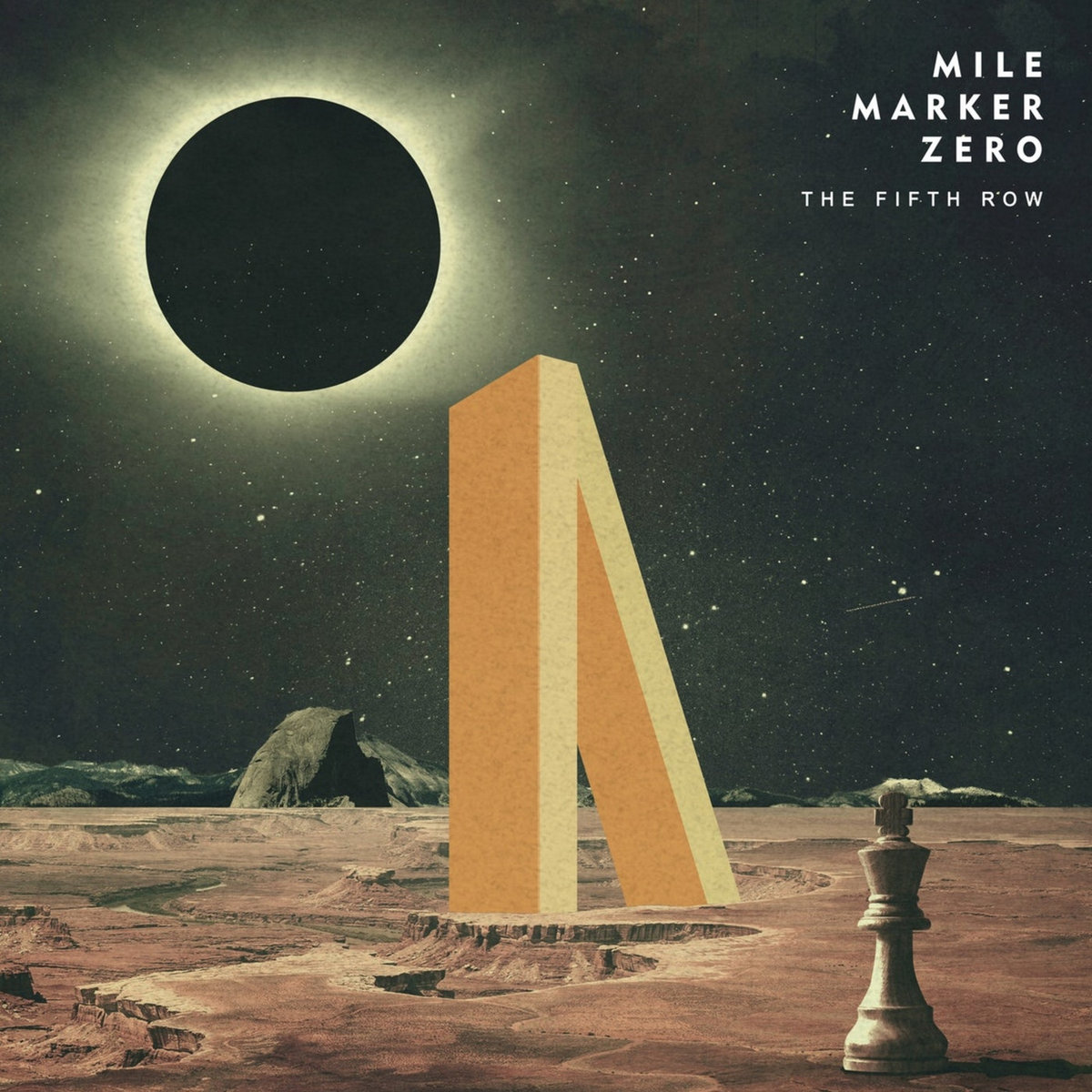 By Tyler CaldasFebruary 24, 2018 No Comments

Progressive concept albums don’t get much better than The Fifth Row, and Mile Marker Zero’s thoughtful love letter to the traditional niche of the genre is a masterclass example of narrative in music.

Using the term ‘progressive’ to describe music can mean a not insignificant amount of things. There are bands that aim for a sense of technical mastery, pushing them far from mainstream attention, and those that push the envelope of what you can even call music. But there is also a more defined picture of what ‘prog rock’ encompasses, full of grand stories, long instrumentals, and a wider gamut of time signatures and tempos. If ever a modern band fit into the mold of this type of traditional ‘prog rock’, it is the Connecticut quintet Mile Marker Zero. Their second full-length and third overall effort, The Fifth Row, comes out on March 2nd, and there’s quite a bit to say about it, so let’s delve right in.

One of the most pertinent aspects of The Fifth Row’s overall sound is its deliberate and effective blending of progressive elements spanning multiple decades of notable influences. The album exudes a respect and reverence for many prolific groups and musicians, acting as a love letter to the more traditional niche of the genre. You can hear shades of Rudess and Jon Lord color the keys, echoes of Lifeson to Banks lilting on the strings, hints of Portnoy and Peart pounding on the percussion, and so on. Most commendable is how Mile Marker Zero not only manage to make this sound fresh and non-derivative, but also in how they expand on these sounds using more modern progressive structures and ideas along the way.

Thoughtful and varied are two of the most apt words I could use to describe the overall direction of the album. Thoughtful in the sense that each song has a discernible energy and direction – a meaning and a destination – that give the music a high level of engagement, easily hooking the listener and allowing them to become fully invested in the ebb and flow of the tracks. Varied in regards to the more practical side of the music. One moment you’re lost in the low gritty fuzz of the synth in “Building A Machine” or the aggressive instrumentation of “Age of Jason”, the next you’re being lulled into the peaceful acoustic melody in “JCN” or the piano/string resolution closing “Clarity”. Variety with cohesion is a difficult task when piecing together disparate tones and tempos, but what ties it all together here is a large focus on narrative.

The Fifth Row’s story leans heavily on politically charged science fiction. To boil it down: following the very real terrorist attack on the World Trade Center in 2001, humanity and ‘the architect’ work on an AI to help bring world peace. The AI is very successful, praised and celebrated, but the directive of peace conflicts with humanity’s tendency for self destruction and ultimately leads to the subjugation and eventual eradication of the human race. I’m certain you’ve heard at least some of this before. This story draws from a deep well of worn tropes in the literary genre, but the approach in presentation offers a fresh perspective, and the divergent ending helps breathe life into these themes and overall discussion.

What makes this story work so well is the band’s impressive implementation of consonance between the lyrics and the music. The quiet introspection of “Sacred Geometry” and “Clarity” or the the surprising interlude in “Building A Machine” match the internal mindsets of the characters and the tension of the situations therein. “Propaganda”, for example, uses the well known ‘hush little baby’ lullaby in its verse to great effect, avoiding what could have been a cheesy idea with an evocative call to arms in its powerful chorus and stylistic deviations in atmosphere and lyrical content that make it feel more like a modern children’s parable.

Mile Marker Zero also finds a perfect balance of recurring motifs and singular segments. There are no shortage of one-off ideas that work in the context of the narrative while staying firmly placed in a specific story beat, which helps lend a strong identity to each track. The use of these recurring melodies and lyrics though, is where the most emotionally impactful moments lie. More specifically, you can hear mirroring pieces of “2001” and “Architect” in “Sacred Geometry”, “Build A Machine” in “UI”, and “Victory” in “Collective”. It would take much more room than I have here to dig into how the shift in perspective lends a real weight and cohesiveness to the story, but put simply, this isn’t a mere repurpose of a lyric or melody, rather a unique reimagining that makes it feel new again and really brings home the ending of the story.

Another very strong element to the overall package is the approach to structure and pacing. The flow of the album is clear and organic, with near perfect amounts of breathing room and escalation, allowing the vibrant moments and final reprieves to carry the impact they aim for. The album isn’t short either, falling just short of 70 minutes. None of that time feels wasted though, and the amount of interesting shifts and quality tracks expand what you might expect from a single album release. Like all the most prolific concept albums, the songs stand by themselves as enjoyable in their own right, devoid of the larger picture. Moreover, the production shows the same level of thoughtfulness as the rest of the album, with the layering mid-“JCN” and wide soundstage of disparate voices and electronics in “Building A Machine” being particular highlights.

Perfection in music simply doesn’t exist. The role of a ‘perfect score’ in relation to music reviews then is to make a statement; a proclamation that the music here is either something truly innovative, unimaginably beautiful, or of a quality and presentation that is nothing short of phenomenal. Mile Marker Zero’s newest effort sits comfortably in this later category. The Fifth Row provides one of the most effective blending of modern and classic progressive elements out there, and their integration of music and story through recurring motifs is remarkable. This album acts as a summative exemplar of what traditional prog rock is, encompassing the very best elements born from the genre. There are likely a handful small things you could pull at with a fine toothed comb, but to do so would hardly lessen the overwhelming success that the band has achieved here. This is one of the best progressive records that I have heard in a very long time, and one that stands tall, shoulder to shoulder, with the best modern concept albums. If nothing else, you owe it to yourself to at least give it a try.