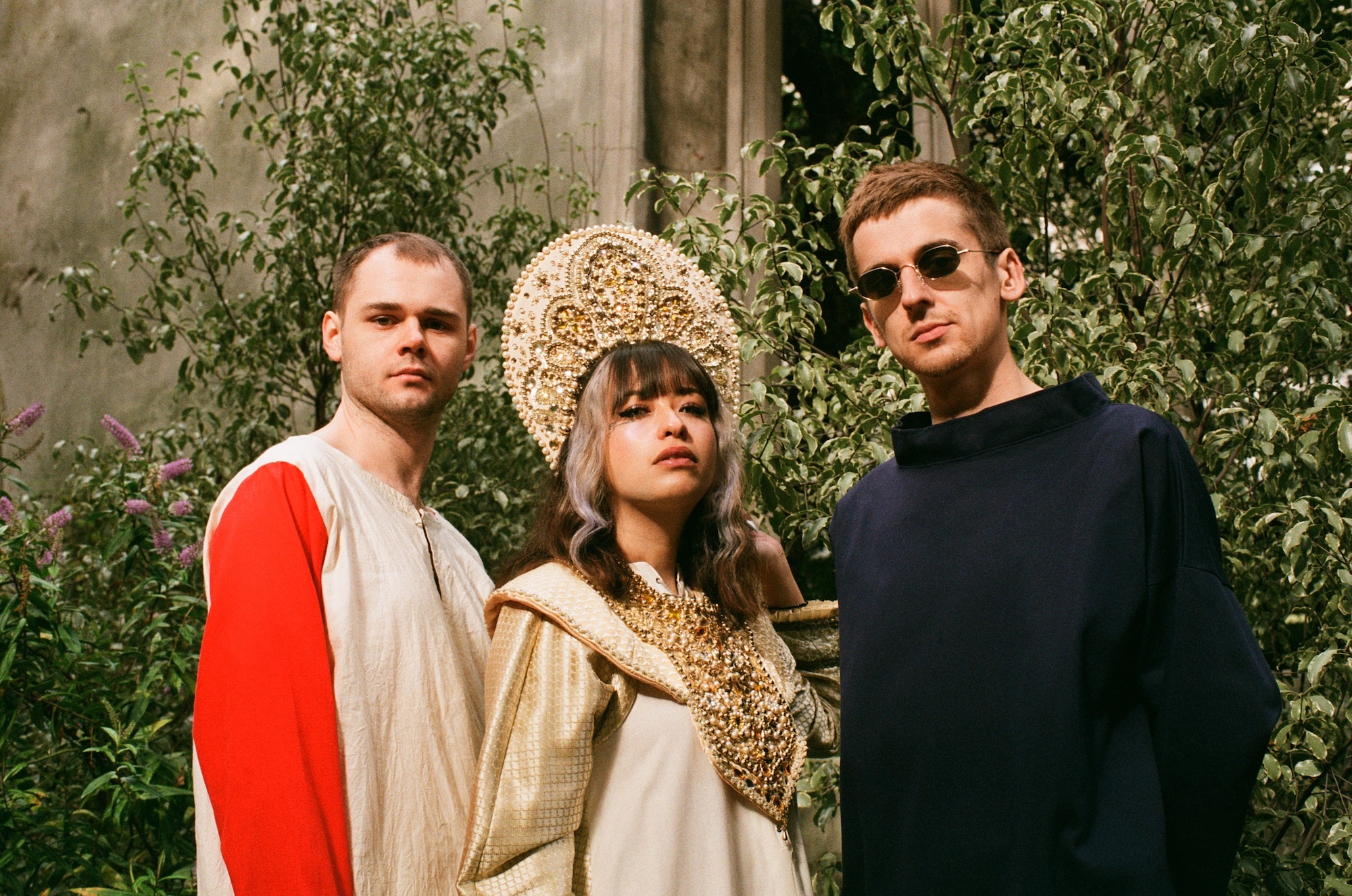 By David RodriguezMay 6, 2021 No Comments

Kero Kero Bonito remain as saccharine and salient as ever, exploring humanity’s past, present, and future in a massively killer EP sequel in their Civilisation series.

Let’s just get right to it: Kero Kero Bonito are one of my favorite bands of all time, certainly one of my favorite pop acts as well, as made evident by the last two times I talked about their music. In my review of Civilisation I, I ended on a very, very high note by proclaiming they are ‘one of the very few bands that I feel could do no wrong as long as they retain their defiantly upbeat spirit, penchant to experiment, and the will to stay true to themselves.‘ Needless to say, I’m happy to be here today reviewing Civilisation II, the latest release from the trio. It’s almost unfair that I exist at the same time as something that gives me nearly unmitigated joy and happiness.

Civilisation II is a three-track sequel to their last three-track EP, this one with a song each styled on the past, present, and future of humankind; you know, civilization. The first EP dealt with monolithic themes like climate change and its speedy race toward certain doom, the societal woes brought on by technology, and revolutionary action against a totalitarian class that would rather keep us all busy fighting and bickering with each other. We’ve come a long fucking way from “Flamingo“… or have we? While Civ II is sonically a mark more whimsical than Civ I was, the themes still ring true and loud. On top of that, the band made this EP under constricting, but wildly rewarding conditions, namely only utilizing vintage technology to help develop the tracks. There’s a lot more influencing this project that the band go into with Dazed, some I’ll touch on, some I won’t, so it’s worth a read for the supremely curious or hyper KKB fan like myself.

“The Princess and the Clock”, the past song, takes the form of a fairytale, one of ambiguous nature and origin, yet familiar enough due to tropes and the moral of it being easy enough to suss out. A child and her boat wash ashore on a new land, the inhabitants mistaking her for a princess delivered by the heavens. They whisk her away behind the bulwarks and stone walls of a castle complete with a tower hold where she’s kept and served by many, though a captive she still is. A clock in her room stays frozen at the time she arrived and doesn’t move; same with, it’s implied, the girl herself as the chorus lowly sings ‘eternally a child she would remain‘.

The tale is told around appropriately floaty synths and tittering hi-hats, accented by sampled and spliced vocals from Sarah, a small vocal cameo from producer Gus Lobban, and lovely sky-blue atmosphere brought together in only a way KKB could do. Though I’ve seen some people compare the story to Japanese fairytales like The Crane Wife or the story of Princess Kaguya (The Tale of the Bamboo Cutter), it’s confidently its own story, providing clear interpretations of breaking free from captivity, owning your freedom, and simply living your life as the captive girl wishes for her own wings after watching birds fly from her window, and flies away upon fulfillment. It’s evident that the people that took the girl hostage are somewhat puritanical in nature, holding the word of (a) God above all, directing their actions by it, and likewise absolving them of potential wrongdoing and guilt – perhaps some light commentary on how overly zealous behavior, tenets, and unmitigated faith hold us back. The music video is also absolutely captivating.

“21/04/20” is our present-day foil, cataloging an April day in Sarah’s life last year during the initial pandemic lockdown in Bromley, London (note how this EP was released a full year later). It really effectively captures the malaise we (well, most of us) felt from quarantine. The subdued yet twinkling instrumentation smacks of something from Time ‘n’ Place and carries an ever-so-slight feeling of unease and mundanity to help paint the picture here – recycling leftovers for several meals, a child celebrating their birthday with only their parents present, a phone call with a friend to stay in touch and provide a stopgap for social gathering.

‘Back at home, I play the game
Rewatch repeats and set a call up with a friend
A means towards an end, ’til we can meet again
‘Hey, so how are you doing?‘
‘I’m okay, you know, the usual, kinda weird‘‘

The song comes off exceptionally relatable for obvious reasons, crafting an air of sunny hope while still contending with the feelings and thoughts that crossed our minds during 2020. It feels warm, knowing, and conscious; wholesome as KKB is known to operate, but not sterile.

And then we come to “Well Rested”, which I will say upfront is probably my favorite Kero Kero Bonito track ever now. The longest song they’ve released at seven minutes and ten seconds, it’s a dance/house epic that blooms from the subtle synths and mechanic percussion KKB is known for. First, the song bleeds into earshot gradually and in a similar, through inverted, fashion that “Rest Stop” ended Time ‘n’ Place. A small easter egg for fans, or deliberate reference that connects the two tracks? ¯\_(ツ)_/¯

Thematically, it places Sarah on a soapbox to deliver some compelling spoken word with all the fervor, charisma, and righteousness of a doomsayer priest, only – plot twist – she is pushing back against those types:

‘False prophets proclaim that the end is nigh, and that humanity is not worth existence. This is a trap laid to ensnare the living, a lie of the weak-willed, the inhuman. Their temples are in disarray and they surely cannot know what only Gaia knows.‘

This is a direct dig at prevailing ecofascist-esque thought that says we humans are the virus, the scourge upon the earth, and that it is better off without us. Throughout the entire song, there’s a number of references to earth – or Gaia, who is the deified representation of the earth in Greek mythology – and how only it (he/she/they?) knows how it all shall end in the future. Humans have no place in forecasting, or forcing, the inevitable end, for only the mother knows. ‘The resurrection will come only when Gaia requires it. It will not come soon if we care for our mother. Instead, we will be well rested.‘

As all of this is going on, you’re treated to some of the most interesting and fun production that KKB have ever laid down. It doesn’t take long for the track to catch its beat and compel you to dance. Prominent acid- and Chicago house influences rear their head to amazing effect, even at times emulating legendary composers like Yuzo Koshiro, without compromising the band’s more sunny disposition. With that disposition in mind, Sarah closes out the track and EP with probably the most apparent and defiant lines of this whole series thus far: ‘We have survived a hundred apocalypses. Doomsday hasn’t come yet. You cannot stop civilisation.‘

Ending on this statement is much more powerful than it has any right to be. Though KKB are generous in their analysis of the future, it really speaks to the spirit they bestow in their music: overcoming adversity and pushing through. When I think about it, the band has nearly come full circle. They’ve taken all this time – ten years – to deliver chiptuned bubblegum-adjacent J-pop, faded indie glitchrock, and apocalyptic noise-horror asides, all to land on the same message delivered on different scales. Go forward. Do what you can, what you want, how you want. Persevere. It’s now with Civilisation II that you see the clearer link between the past and present, and, with any hope, how this spirit will extend into the future. If KKB were to call it quits after this (please don’t), this would be a hell of a swan song to go out on. The band said it best themselves: ‘The best pop music blasts you into the loftiest corners of your imagination and resounds with your most personal memories at the same time.‘ After all this time, I find those words the best way to describe how their music make me feel.

Civilisation II is utterly electrifying, life-giving, and intimate. The merging of past and present, old and new, known and unknown makes for profoundly compelling architecture, something done in pop music often though, frankly, not quite like this. They retain their exemplary, inimitable versatility by skating fancy-free from shimmering, infectious themes to ominously anachronistic anthems built to withstand the worst of times. I am beside myself – even as an admittedly rabid fan, I am fickle, able to see the flaws and downfalls of those I cherish and… I’m just not seeing any here. Musically, structurally, and thematically, Kero Kero Bonito are flawless, almost superhumanly so.