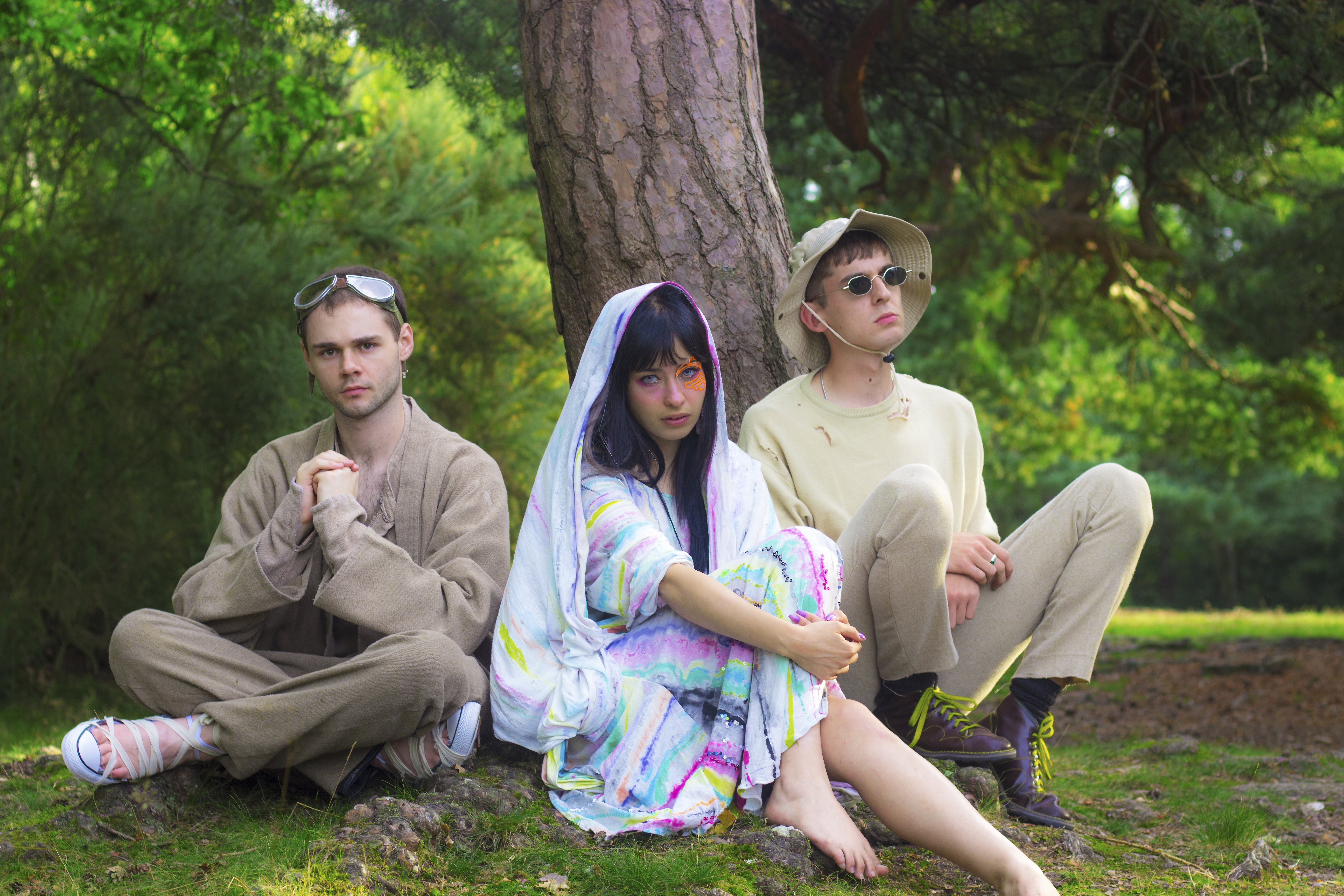 By David RodriguezOctober 5, 2019 No Comments

Kero Kero Bonito continue to impress beyond belief by doing what they do best: what you least expect. The trio are currently one of the best acts in pop, no contest.

I was speaking to someone about Kero Kero Bonito recently and she had a wonderful theory about their career progression. To paraphrase and also expand a bit, Intro Bonito is about adolescence – it’s playful, crass, and immature in a fun and charming way. Bonito Generation is late adolescence and early adulthood, evident by the references to graduation and the onset of… *shudders* responsibility. The sound is more refined and varied, but still youthful and energetic. Time ‘n’ Place is full-blown millennial existential crisis, contending with mental health, personal dreams, self-esteem, failure, and so much more with a caressing indie/noise rock edge. In essence, by design or not, we’ve watched KKB grow up through their art. Makes sense, right? Shout out to Freya Jade (link very NSFW).

Now, the English trio have tossed another project our way, by surprise, which seems to be the band’s preferred method of delivery. It’s called Civilisation I and, as implied by the name, it takes a macro look at where we’re at as a people, and it’s not pretty. Until now, KKB have been preoccupied with the individual, whether that was singer Sarah Bonito channeling her own life and experiences or creating stories didn’t matter so much – it was a micro approach. With this new EP, KKB have imagined our impending doom as a saccharine pop day-mare, where perhaps it’s too late to turn things around. With social and political division, earth scorching wildfires, or restless waters flooding our landscape all becoming more of a staple of our reality, they’re nigh impossible to ignore unless you sleep on a bed of privilege or ignorance.

Turns out those are the very topics covered on Civilisation I. “Battle Lines” opens up and it’s a refreshing sound, returning to a synthetic base older KKB fans are familiar with. The percussion is tribal in execution, sounding a little like the music that plays in the prehistoric era of Chrono Trigger, something I’m sure the band appreciates given their history of video game sampling. It’s tinny and hearty, with bright synths accenting throughout all equaling great fun – classic KKB. Sarah’s voice is characteristically serene and calm, missing the post-production warping and occasional screams from Time ‘n’ Place, though there is a bit of effects over the vocals and layering after the first chorus that makes the uncharacteristically violent images in the lyrics stand out even more: ‘I see blood in my dreams/A beaten face/The gas/The streets‘.

Sarah also sings of war being ‘always on‘, all of us being soldiers in that war, references to theocracy and divine right… nothing in KKB‘s pop world sounds good this time around. Gone are the days of marveling at a “Sick Beat” over an airy Super Mario 64 sample, or enjoying the simple things in life like jumping on a “Trampoline“. This song contradicts itself with every note, painting pictures of unrest, injustice, and corruption that pours into the streets in the form of intense protest and violence over a crispy, layered pop beat. Likely fueled by Brexit-era England and its unique mess among other things, this song has some of the best songwriting I’ve ever heard from the trio, frightfully scarred and forcefully matured by the trauma of it all.

I’ve been wanting to talk about “When the Fires Comes” ever since it came out as a single in early September. The final piece to my pal’s theory outlined above was that this song pointed to a new KKB, where we are subject to a literal apocalypse – grappling with our end so to speak. Well, she was right – this track is literally about heat death and fires brought upon earth from decades of unflinching arrogance toward the environment we live in and its well-being. The video takes on a ‘Mad Max, but make it spiritual’ feel, with animal skulls and raider chic galore, but the real story here is the lyrics which make it quite apparent that the earth is capable of exacting revenge against us. It personifies the earth as an awakened, or newly animated, being that’s furious at its inhabitants. The hook, while catchy, is the most damning piece of it all:

‘All around the world they weep, now they know it’s true
The sun’s returned to send us home to earth
Everybody takes their time making work to do
But no one will be left here to remember us
When the fires come’

We get all of this over a silky synth flute, light keyboards and vibrating bass, while Sarah dons post-apocalyptic makeup that calls to fictionalized shamanism, gleefully dancing in the burnt sands of what would be left if the fires do indeed come. It’s intimately painful, juxtaposed with shots of the band in a lush forest and closeups of Sarah’s hair dancing its way across the bridge of her nose, when the lyrics act as the trigger pull from a flare gun to signal a dire emergency. Again, one of the best KKB songs I’ve ever heard.

“The River” closes out Civilisation I, calming as the flow of natural water itself, but no less urgent. The song reworks the trope of the great flood, most famously of biblical proportions, into the cleansing wash from the purging fires that came before it. Lyrics about a holy mother, and beckoning to be received in her arms when the time comes read more like a genuine prayer or plea for mercy. The torrential rains are forecasted by a cutting pre-chorus, delivered with a gentility that only Sarah could achieve: ‘We pass down our wisdom/After sunshine comes thunder/The longer the drought/The heavier the clouds‘. This is where the spirituality from “When the Fires Come” twists to a more heavy-handed form, but it’s effective nonetheless. Pious chants are peppered in the middle of the record behind Sarah – she even speaks a little Japanese beneath herself at one point, a lovely wink to fans of her Japanese singing in older albums, however indiscernible it is to my unilingual ear.

Civilisation I is beautifully desperate – ‘dystopian’ doesn’t quite cut it as a descriptor. The kitschy luxury and youthful energy of their pop sound clashes violently with the reality of our life – though thankfully one not as fully realized as portrayed on this EP. Just as Time ‘n’ Place was a refreshingly honest look at one’s self and surroundings, this is that on a larger, more doomed scale. By now, you can always trust Kero Kero Bonito to be forthcoming with feelings and thoughts, no matter how uncomfortable or unsavory. Even still, there’s always an optimism through it all. Sarah’s voice continues to be a beacon of hope, something you can cling to in times of great despair, and the production that both Gus and Jamie provide is meshing more and more with her in an increasingly meaningful way. Their music is a product of their long-standing friendship and work together as bandmates and I’m confident it can go nowhere but further up, past the cracked stratosphere of our planet and into the stars.

At this point, it doesn’t really matter what KKB sound like. They have managed to construct a name for themselves based on nothing and everything – a truly subversive act, and in the realm of pop no less. This is one of the very few bands that I feel could do no wrong as long as they retain their defiantly upbeat spirit, penchant to experiment, and the will to stay true to themselves. They will always be worth looking to for new, impassioned music that gives you exactly what you want, but also something totally different. I love Kero Kero Bonito with all my being and with Civilisation I, they’ve secured a spot in my list of favorites bands of all time.