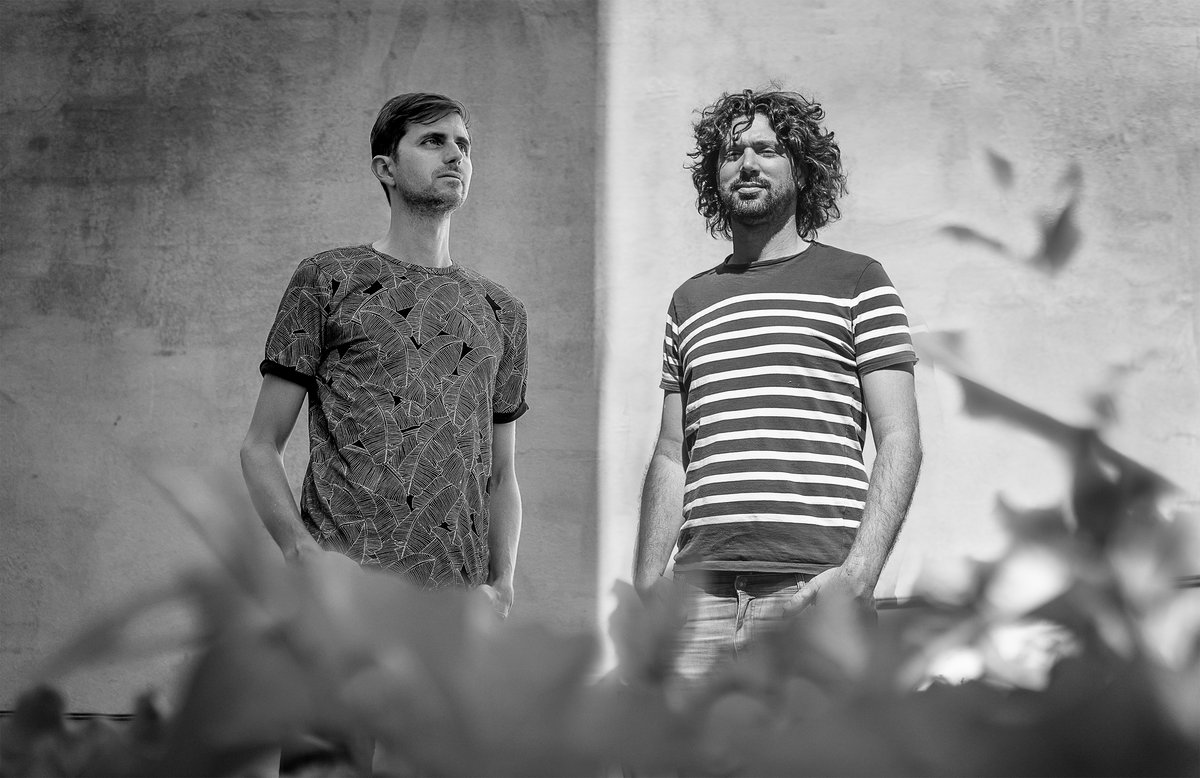 By Rodrigo Torres PinelliDecember 15, 2021 No Comments

The duo catapults into metaphysical planes, exploring transcendence on their latest release, Migrations.

Who’s up for some heavy improvisational music? I hope you are, as Ground Patrol‘s Migrations is all about communication and permutation. Luckily, EIN was introduced to their material early last year when we covered their previous release, Geophone, so this album does not come as a surprise, not entirely at least. Today, I shall make a case about why you’d have to spend half an hour listening to this moving piece.

I have three lines of argument, all distinct yet meshed together. These are the chance to own the metaphor, the experimentation of a dynamic texture arc, and the interconnection of musical elements as communicative devices. Let’s go from last to first. Disclaimer: I won’t dissect each song, for I consider this a piece to listen to in its entirety.

Migrations is about 25 minutes long, split into three tracks. Within them underlies the musical interactions of Alon Ilsar and Kyle Sanna. Just guitars and drums. In fact, recordings lasted for just one studio session. As the songs progress, you can identify shifts in dynamics, pace, and tone, just like in a conversation, with little strings attached to a structure. However, there is a common thread amongst the instruments to a style depicting Ground Patrol‘s skill and personality.

Picture yourself watching a movie in a language you don’t understand at all. Chances are that you’ll either stop watching or understand close to nothing. Not so fast, though: there’s tons you can actually pick up. Even if you can’t follow dialogues, you’ll probably find out who loves who, who hates who, who’s bad guy, and who’s the hero. That is because you can follow circumstances, how scenes are built, and what the tones are regardless of the details. The same applies to Migrations: each musician attributes to the interaction their vocabulary in search for results larger than the sum of the parts. That’s one argument in favor, onto the next.

Dynamic texture arc. Fancy, but, what do I mean by that? It is how I perceive the music in Migrations, which develops in time instead of considering an episodical narrative, like in a book or movie. Ground Patrol grants us with highs and lows of sonic intensity, articulating a slight narration, not of facts but musical interplays. These respond to the musician’s intuitions, abilities, and background.

On the one side, tribal drum patterns consist of focused repetition and complex accentuation; on the other, we have persistent yet subtle guitar lines, as well as some ethereal overdubbed chords. Together, they create the album’s plot, scenery, and cast. One could state the question: ‘What’s migrating, then?‘ This takes me to the final argument. Two down, one to go.

So far, I didn’t quite dive into the sonic qualities the album has, did I? That’s because I’m saving it for last, although it’s not my intention to reveal that much. In the end, I want you to experience this album. For you to say what the album is, and potentially, what it is not. Migrations opens a path to owning the metaphor.

With albums like these, the journey matters the most. Through improvisation, music catalyzes an inward inspiration and exposes it to other musicians and the audience. When music is free of structure, the intertwinement is emphasized, and such is the case here. Hence, as a listener, there’s plenty of your input to give the elements a new meaning every single time. Let me expand on this point while picking up on some previous ones.

As I mentioned before, I’d like to elaborate on the migration aspect of this record. There must be a reason why it’s called Migrations. See? This is me assuming stuff, letting myself trip over the music, and creating a picture that’s based on my own experience. I’ll carry on.

From an etymological standpoint, a migration should probably consider a start and end. A journey. Then, how does the music contribute to this idea? If I focus on the drums, they are not eclectic or unstable. They are constant, varying in volume and pace. There is a palpable reminiscence of classic minimalism. It keeps the music moving forward, like a hypnotizing train. You can feel how notes cluster up and space out slightly. It is the change in rhythmic subdivisions, something challenging to pull off, that makes you stay tuned. It clicks your brain, distracting you from accustoming or boredom. If drums are the robust engine, what about guitars?

In my mind, guitars play a connecting role with the intellectual and emotional self. In “< Migrations <“, guitars stand over the energetic rhythmic foundations to establish yet another never-settling pattern. This interlaces with my intellectual consciousness, in the way that there is still a connection to pace and rhythm; it is associated with movement and rationality. However, the higher-pitched reverberated arrangements – which are beautifully placed, by the way – speak more of sentiment and emotional evolution, without being any less thoughtful.

All these interpretations create a vast imaginary space to dwell in, to feed my thoughts of an unexpected catalyzer, an elixir to enhance pre-existing daydream or to create a new one. That is how I own the metaphor.

Did I drop over 800 words without dissecting the album for a proper standard review? I guess I just did, and I won’t stutter. Ground Patrol is by no means standard, and I can guess that the Art As Catharsis fellows know that very well. Their latest release, Migrations, is nothing but pure experimentalism to themselves and us, the listeners. Brace yourself for improvisational tidal waves, where you’ll meet as many elements of free jazz as of minimalism.