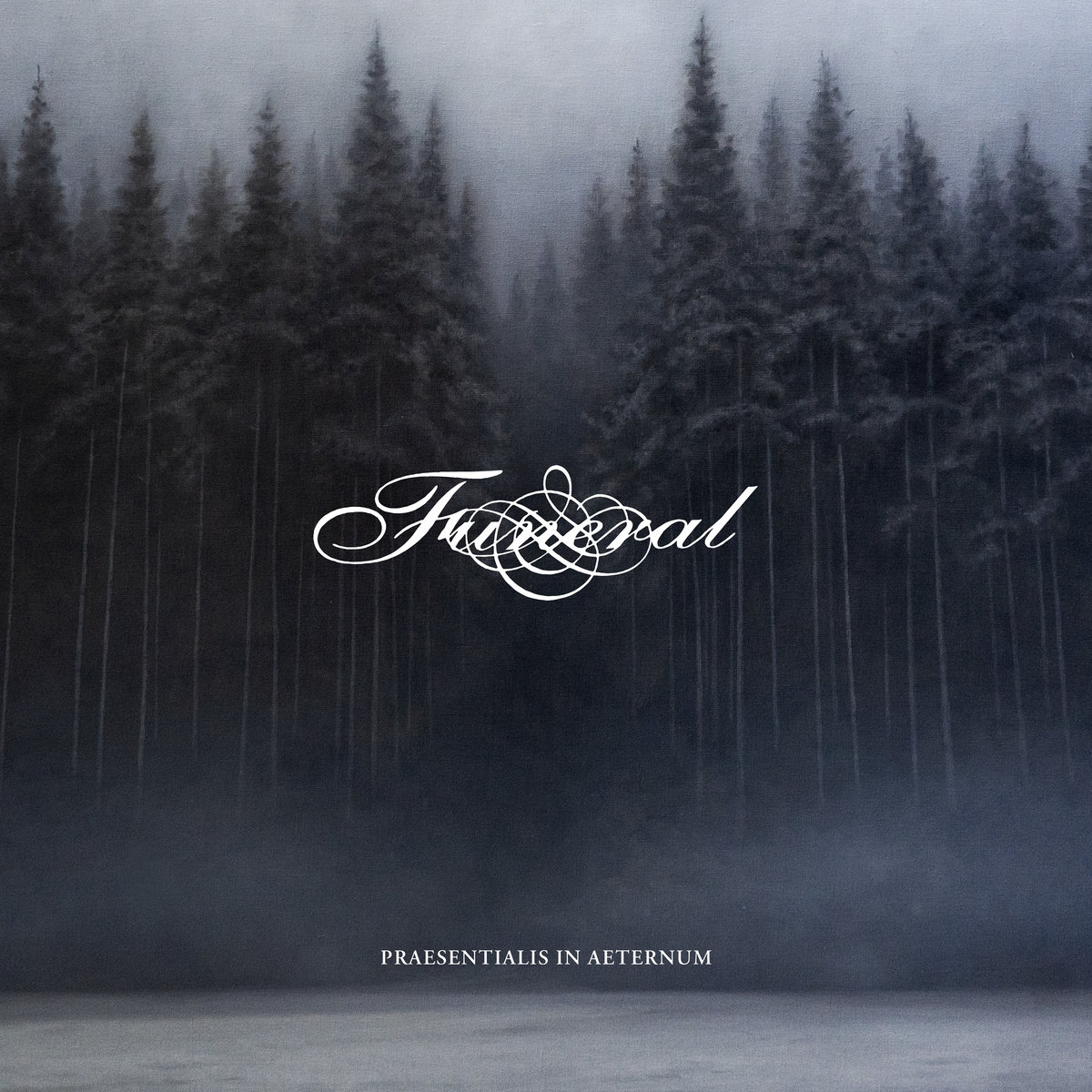 The funeral doom legends prove their legitimacy with their seventh studio album, unleashing devastating heaviness on an upmost grand scale.

Founded in 1991 by drummer Anders Eek and former guitarist Thomas Angell and often referred to as one of the proprietors of the funeral doom subgenre, along with Mournful Congregation and Thergothon, Funeral have expressed great melancholy and grand vision throughout their musical career. Generating seven studio albums amidst numerous line-up changes, most notably being the first doom metal band to employ a female vocalist (Toril Snyen), whom they recruited for their prominent release Tragedies (1995), Funeral continue to develop their virtuous musicianship further with Praesentialis in Aeternum, the band’s first release in nine years.

Upon first impressions, the album clearly appears to be displaying a kind of mystical atmosphere, as evident from the open few 30 seconds of the first track “Ånd”. The organ accompaniment to the brooding, down-tuned guitars and bass creates this enchanting mood along with the vocals with a clear folk-like presence. I almost get caught off guard, however, by the development in riff ideas; going from this folk-doom pattern to full on death metal chugs and harsh vocals seems to add a darker side.

The string and brass elements are another strong addition here, generating a cinematic level of intensity that works quite well with the slow rhythmic percussive breaks, demonstrating an all-encompassing doomy effect. The epicness is in full gear with much of the orchestral elements on this record perhaps, particularly for the tracks “Erindring I – Hovmod” and “Erindring II – Fall”. The artists really push the power for this record expressing at times some moments of true folk-infused passages, and at other times extremely mournful funeral doom and death metal ferocity.

The rhythmic accompaniment is insanely tight, performing the knuckle-draggingly slow, doomy pace that evokes a dark, dreary realm. Evident on tracks such as “Materie” and “Oppvåkning” from the explosive toms stricken with excessive ferocity whilst the accompaniment of the bass depresses the tone. The guitars, on the other hand, employ a more melodically aggravated tone, instead adding to that epic Tolkien-esque dramaticism. There is a great deal of diversity being highlighted through this interplay between the power/folk elements to the more extreme metal incorporation.

Other moments that stand out on this album are clear from the ominous vocal lines, which add to this chilling atmosphere, employed to effect on “Dvelen”, where we hear the contrasting effect executed by both the operatic high-range on one side and the death-growl snarl on the other. The backing vocals appear in the form of a gloomy, sombre choir, setting a melancholic mood within this already chilling atmosphere.

More swampy atmospheres plague the second half of this record, with doom-trodden riffs that command brute force entwined with sweet melodic ideas that keep the last few songs fresh. “Her til evig tid (Ånd: Epilog )” and “Vekst (Erindring: Prolog)” particularly demonstrate some intense moments of sorrow and despair whilst experimenting with some damaging death metal-inspired riffs. At times there appears to be unnecessarily long passages throughout many of the tracks on the album, yet they are filled with a diverse set of musical devices that at least keep the listener engaged enough to anticipate the next section.

The penultimate track on the album, “Shades from these wounds”, channels in its forlorn misery through a virtuosic, and resonant orchestral piece, carried by the hopeless weight of the piano and given some melancholic beauty by the string accompaniment. There appears to be no lack of musical proficiency throughout the album, and Funeral truly make this clear. “Samarithan” brings things back for a final embrace into the carnality of this funeral doom epic. The slow, swinging riffs and percussion personify the marching into the valley of death, whilst the vocals express deep remorsefulness through wretched harmonies of despair.

Funeral have not only proved their legitimacy as one of the most significant funeral doom bands to ever exist, but years on and they’re still displaying the same musical proficiency they were able to achieve on releases back in the early ’90s. Whilst a noticeable departure from the more symphonic elements that were recognisable from the band’s classic doom metal days, Praesentialis in Aeternum is an immeasurable achievement for the band, demonstrating an acknowledgment of their epic stylistic traits whilst infusing elements of metallic extremity, cinematic-like textures, and despondently beautiful, melodic song structures.