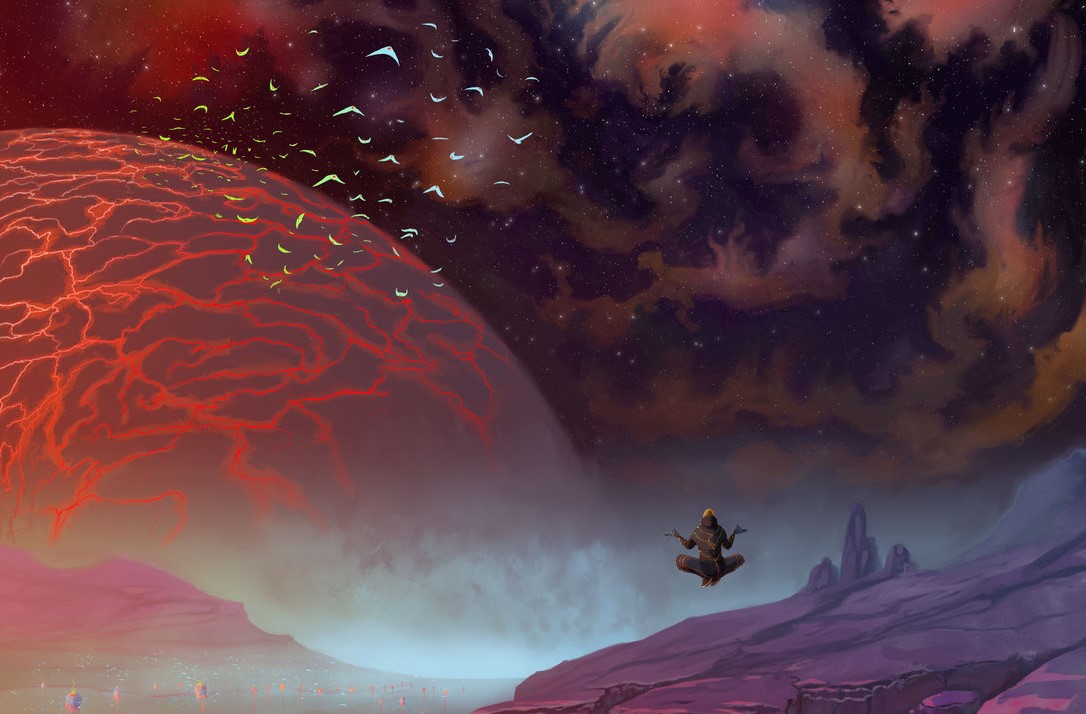 Take a short but intense trip across the cosmos to the Black Widow Nebula in Caelestra‘s post-black-metal-fuelled prog spaceship.

I’ve had a very busy year. Most days I feel I’m running around like a headless chicken, figuratively. Juggling work, band practices, recording sessions, writing for Everything Is Noise, friendships, family, and sanity has me in a constant state of impatience, and I’ve come to hugely appreciate short albums; I’m talking anything from 15-35 minutes. I’ve fallen in love with EPs, as well – I’m quite hard to impress, so if a band can do it in four songs, and keep me impressed for the entire time, but not leave me feeling as though I’ve been denied anything by the end, then I’m very happy. Concise music has been what I’ve been after all year. Stop fucking around, get to the point; no, you don’t need another chorus at the end, thanks.

So when I picked up Caelestra’s post-black metal debut album, Black Widow Nebula, I was pleasantly surprised to see that it fell right into my goldilocks zone for length: 31 minutes. What’s more, it feels even shorter, thanks to each song’s musical diversity. I think with the exception of Morokh’s Serpent’s Nest EP, I’ve never seen a release this short from any band that has ‘black metal’ as part of their genre tags. I always instantly think of 45-minute-plus albums, where each song is at least six minutes long, and they start feeling longer around the album’s halfway point due to their rather limited emotional and musical palette. Don’t get me wrong, I love being pummelled by misery-laden tremolo picking, agonised vocals, and blast beats, on the right day; however, I’m still thankful that Black Widow Nebula doesn’t fit the above description at all. To be fair, it’s barely even black metal – it has its moments, but for the most part, it’s kind of… prog.

The album opens with its longest track, “Solaris”, meandering gently through an astral canyon of wailing guitars, simple post-rocky drums, and filtered spoken vocals before it launches into an expansive galaxy of distorted chugging, Gojira-style, half-growled vocals, and sweeping lead guitar arcs. Everything about the song is huge, assertive, but not triumphant and certainly never cheesy. Its blast-beat-driven black metal sections are shrouded in reverberant tremolo picking and crystalline chord arpeggiations, playing with the contrast between the dark and bleak, and the richly uplifting. The black metal and epic prog combine into a powerful chorus that makes me feel as though I could simply close my eyes and wake up atop a mountain, or spinning out into the cosmos. “Solaris” feels final, decisive – it’s an odd choice to open an album with, but it certainly makes an impact from the get-go.

“The Astral Sea” lured me into a false sense of security with its drawn-out, clean intro, everything harmonious and sweet. From this sweetness comes one of my favourite moments on the album – a single, chilling tremolo-picked and reverb-soaked guitar, hanging like a sparkling galaxy just out of reach. The sudden, aggressive heartbeats of distortion and drums only add to its simple beauty, and it builds, in the most tantalising way, to – nothing. And then the song explodes, becomes relentless in its fury and determination until its end. There is a lot of attention to detail in “The Astral Sea” – it weaves synthesizers into its dense fabric with such finesse they barely even stand out.

Caelestra use a huge scope of sounds, chords, and moods to create their astral wonderland. The contrast between the dark night sky of the occasional furious black metal section and the twinkling, iridescent nebula of drawn-out vocal phrases, sweet guitar chords, and gently blooming post-rock sections is what really brings this album to life. It feels otherworldly, mysterious, and – even in its quietest moments – epic. Caelestra toy with gorgeous, clean delays and distortion, gentle singing and harsh vocals, blast beats and minimalist drumming, without ever really showing a preference for either. I particularly like the album’s closing track, “Caelum” – I think this one does the best job of pulling all of these elements together in a striking yet cohesive way.

Perhaps it’s just because “Caelum” is the last track on the album, but it feels even more epic than any of its predecessors to me – the black metal sections are more furious, the slow sections hit harder in an almost stoner doom way, and the clean sections are luminous in their fragility. There are also some damn satisfying and occasionally unexpected chord changes, and again that extremely sensitive use of synthesizers. I never thought I’d hear a synth harp and not think it was totally cheesy – well, on “Caelum”, I found it. Even the extremely spacious, clean bridge tickles my fancy, drawn-out vocal phrases drifting through and around the home key of the song, before the final, vast post-metal hurrah, and everything melting into darkness.

There are so many good things about Black Widow Nebula. Despite my aforementioned love for short albums, though, I found myself wishing more than once that it was longer. Caelestra have a lot of good ideas, but I can’t help thinking that they would have come across better had they had more space to develop and become solidified. It feels a little scattered, never really dwelling on anything long enough to have a solid sense of focus. Perhaps just extending some tracks by reiterating and developing one or two of the sections, or even adding another track somewhere in the middle that built on ideas from other tracks on the album, might’ve made Black Widow Nebula just that bit more cohesive. But hey, if my only criticism of the album is that it’s too short, I really don’t have anything to complain about! It’s an extremely solid debut, and I have absolutely no doubt that Caelestra will only build from Black Widow Nebula and come up with absolutely amazing things in the future.