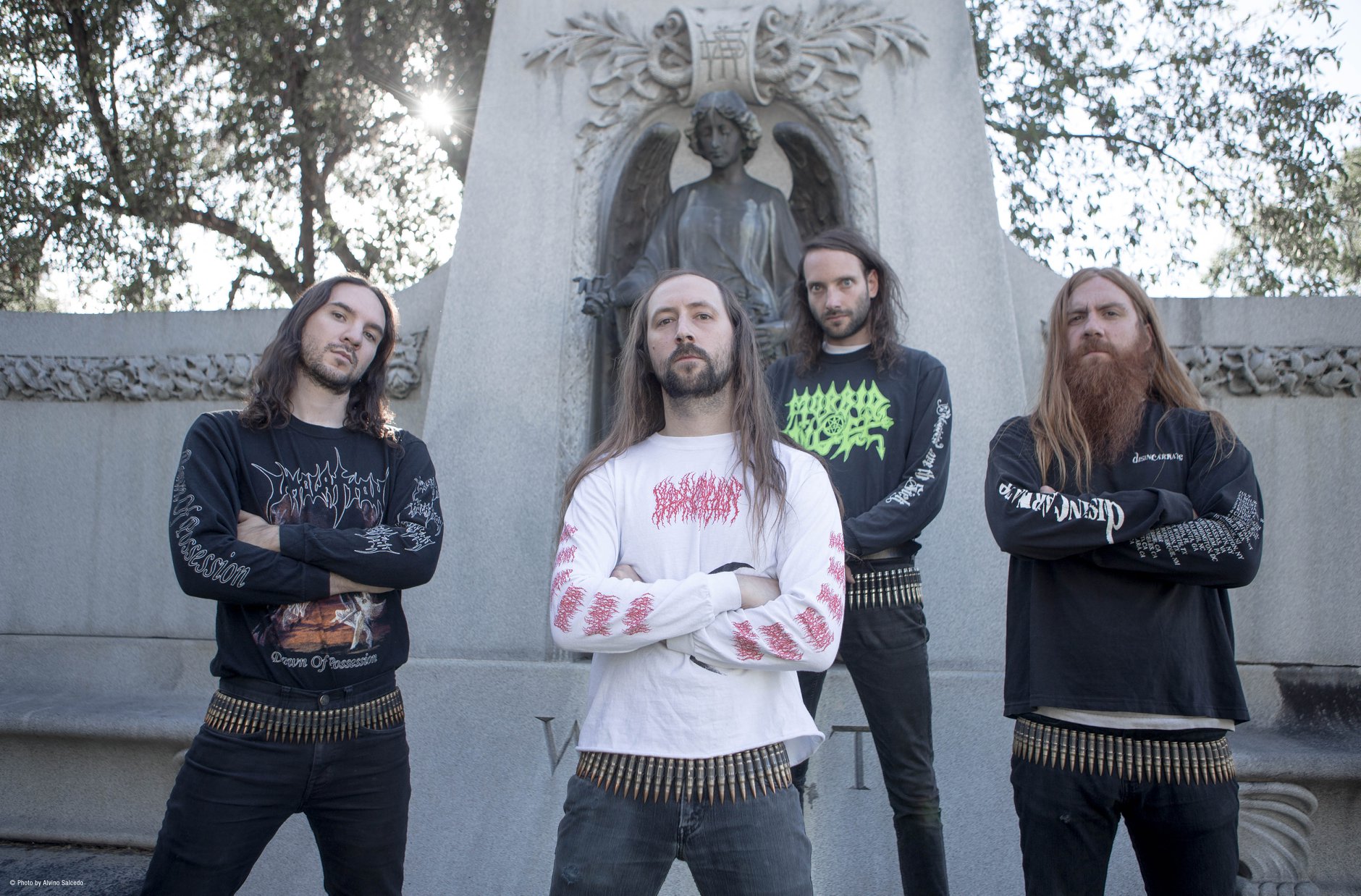 By Jake WaltersNovember 18, 2019 No Comments

Blood Incantation find a deeper connection to the cosmos while flexing their creative muscles making Hidden History of the Human Race their best work to date.

Blood Incantation are one of the most interesting bands to emerge on the death metal scene in the last decade. To this end, fellow editor David and myself have decided to review their latest album Hidden History of the Human Race to see how they have progressed in the last three years. Up first, my thoughts.

Denver-based death metallers Blood Incantation are back after what seems like an eternity since their debut album, Starspawn, released way back in 2016. With only a live album between then and now, Hidden History Of The Human Race is the first new material in three years and given the positive reception of their releases so far, the anticipation surrounding this one is pretty high. If you’re unfamiliar with Blood Incantation, first of all, you’re in for a treat, as they are one of the more original takes on death metal to come out in the last decade. What helps to set them apart is the cogency of their lyrical themes and how well the supporting instrumentation, atmosphere, and compositions sure up their identity. “And what are these themes, Jake?”  I’m glad you asked.

In a word, aliens.

You were probably thinking that it would be something satanic with a name like Blood Incantation. But you also may have seen the album cover already and realized that it was indeed extraterrestrials that these guys were so fond of. With the idea of outside interference by aliens in human history as a backdrop, this record finds a solid foundation off of which to build the concept. This doesn’t mean that the riffs aren’t complex and deadly here as “Slave Species Of The Gods” comes in crackling with an almighty quake to get things started. With echoing guttural vocals layered over the very active guitars and doubling bass, there’s no doubt that this band is a talented bunch, but it’s the atmosphere that really sets things apart. With a spectrum that swings from thrash to technical, it’s impressive that they find ways to make it more than just about the riffing.

In looking at the track list, one might be compelled to think that this is an EP, given that there are only four songs present, but that is decidedly not the case. With the first three tacks taking around 18 minutes, the final song, “Awakening from the Dream…(Mirror of the Soul)”, sticks around for over 17 minutes on its own. What makes this structure work is the pacing. Each track finds ways to be dynamic within themselves as well as add to the ebb and flow of Hidden History Of The The Human Race as a whole. Up-tempo thrashy moments, spacey atmosphere, sludgy doom, and sprawling technicality all work together to create an album that is a joy to listen to and never overstays its welcome.

Perhaps the greatest feat of this record is the sheer amount of fun to be had without going off the rails. Sometimes there’s an unspoken, undefined rule that death metal needs to be self-serious or it loses its authenticity. Blood Incantation are the antithesis of this concept as they bring serious chops and aggression on each song, but also do so with a twinkle in their eye. Hidden History is a prime example of a band doing this with panache and in so doing deliver one of the best metal records of 2019.

With a renaissance of old-school death metal going on, Blood Incantation have been a band to watch ever since their debut breakout album Starspawn. The Denver quartet’s music is of the progressive, cosmic variety which offers a near limitless mode of expression for them to play with… if they tap into it right. Not everyone can just hop into a space cruiser and know exactly where they’re going.

Hidden History of the Human Race is akin to a drama that takes place in the final frontier. The stakes are established early on, our ragtag team of humans goes up into the vast darkness above to complete their mission, but not without some downtime, or tedium if you’re cynical. What the hell could be so tedious about something as awe-inspring as space? You may ask the same thing about death metal if you’re a diehard fan.

The fact of the matter is Blood Incantation have to anchor down to something and that’s blistering, brutal metal. They’re good at it – quick, efficient, and not devoid of melody – but the two first songs here are almost nothing but that hardline death metal. “Slave Species of the Gods” is relentless with it, but solid nonetheless. “The Giza Power Plant” plays with expectations a bit with a Middle Eastern influence that would make Nile blush. The whole midsection is a chance for the instrumentation to slow down and atmosphere to build, which leads into the next track superbly.

I think we finally know what was kept secret at Area 51 all this time. Blood Incantation must’ve had to Naruto run past all the guards and crack some vaults while Mission: Impossible music played in the background in order to bring these unearthly sounds to us. All I’m saying is if a Martian shows up in a couple years wanting a writer’s credit for “Inner Paths (to Outer Space)”, don’t be surprised.

Seriously though, what is surprising is the band’s willingness to go full Cynic with this song in a bid to exude full progressive, cosmic energy and sell the concept of Hidden History of the Human Race to us. It’s like being shown something deeply secretive – sacred even – something that couldn’t be comprehended by our mortal selves. The Anunnaki/Mesopotamian influence of the unreal music video seals the deal. This shows that Blood Incantation aren’t your average death metal band, never have been really.

Luckily, this progressive enlightening continues well into the final track, “Awakening from the Dream of Existence to the Multidimensional Nature of Our Reality (Mirror of the Soul)”. Just rolls off the tongue. Offering the best of both worlds, it feels like you’re kicked to, from, and through portals of existence, one second being beaten into submission with suffocating death metal while the other offers a progressive reprieve with spacey sounds. A multidimensional experience indeed.

Hidden History of the Human Race does feel like a maturation of Blood Incantation’s spacebound death metal, however slight. Digging in reveals deep treasures that you would miss if you simply meandered on the outskirts. I hope they keep pushing things further and further into the expanses with future releases because it’s pretty clear they’re onto something nice.