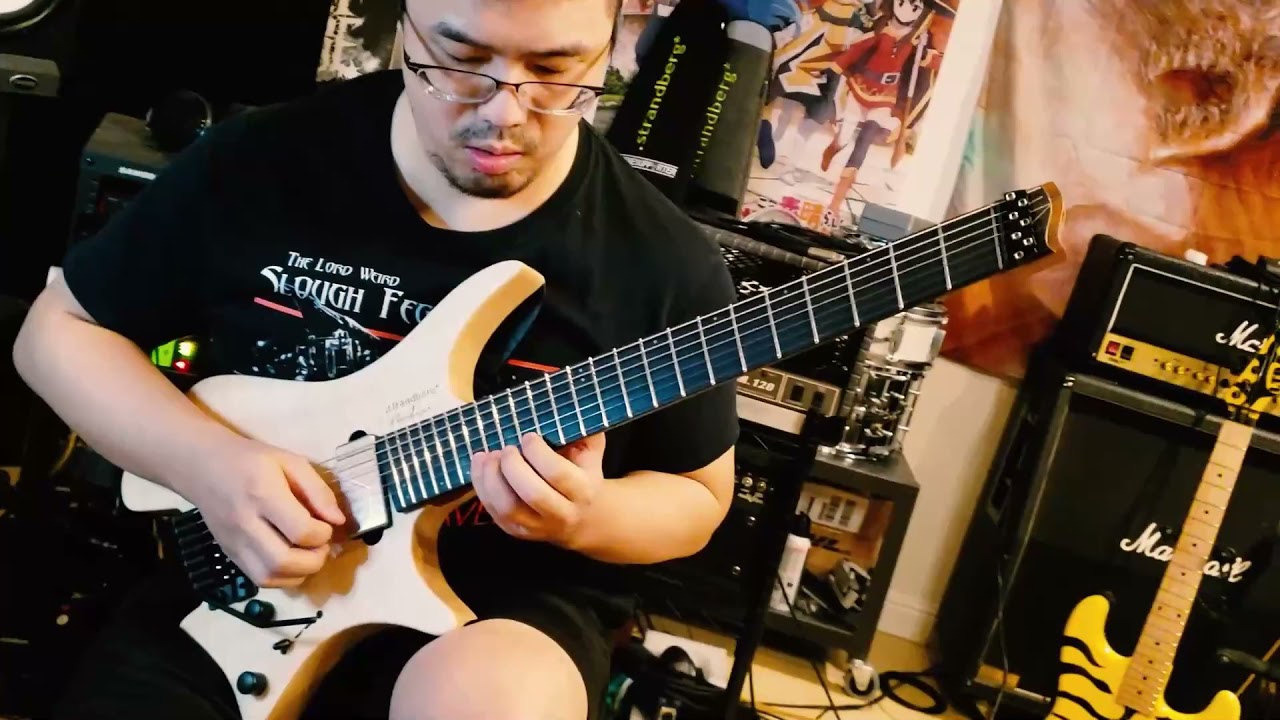 By David RodriguezJanuary 16, 2022 No Comments

Andrew Lee goes full Marty McFly to bring some ’80s shredding metal goodness to the 2020s with Heavy Metal Shrapnel, a loving homage to the heyday of guitar virtuosos.

It’s not very often that I, or Everything Is Noise as a whole, get to talk about some shreddy metal music, let alone good stuff in that vein, but that all changes today with Andrew Lee’s Heavy Metal Shrapnel. If you’re deep in the death metal circuit, you’re likely familiar with Lee – he’s made quite a name for himself heading bands like Ripped To Shreds, Skullsmasher, Houkago Grind Time, and more. He’s a prolific dude, but I did not really foresee him as a straightforward heavy metal dude. This project’s debut album made me see that the love he has for the craft is about as deep as mine… except, you know, he can actually play guitar.

I grew up with the likes of Eddie Van Halen, Joe Satriani, and Steve Vai – even a little Yngwie Malmsteen – emanating from my dad’s car and home stereo speakers, so naturally I grew a bit of an affinity to the sound. These dudes and others that followed were literal guitar gods, able to make the guitar speak louder than words ever could (convenient, because most of these virtuosos made primarily instrumental music), and soon enough, guitar tone and playing style becomes associated with that player just like a distinct vocal style does. Heavy Metal Shrapnel is a completely unabashed and unabridged love letter to those times in the ’80s and ’90s when this style of metal and rock music was prominent and thriving; also a time when video games were taking some heavy influence from metal and rock with their soundtracks. Guess who also grew up with lots of video game tunes in his ears?

It’s real easy to write off music like this as empty and masturbatory when you compare it to more conventional means, but that’s not what virtuosic heavy metal is all about. It’s about technicality, precision, and yes, melody, sometimes even emotion. There wouldn’t be anywhere near as many memorable figures or albums in this genre if it weren’t for commendable writing either. After all, this stuff isn’t just improvised. Lee’s always been a proficient and brutal metal writer, so the potential for truly face-melting solos and riffs is threatening to say the least.

“Blasting the Ozone Layer” is a great intro track for Heavy Metal Shrapnel with a focus on melody and fierce riffing. It’s adventurous and clean, if a little more straightforward, but intro tracks can afford to skirt those lines as a palatable first bite before getting into the real wild stuff, and that’s exactly what happens here. The very next track, “Faster Than A Laser Bullet” (a reference to the lyrics of one of the best metal songs of all time) is absolutely fiery, really showing off what Lee’s capable of on a fretboard with screeching highs and some of the most frenetic fingerwork you can hear on the album.

Later on, we get “In the Valley of the Time Tombs”, which is the token ballad of the album (all virtuosos did this – variety!). Taking things a few marks slower, Lee’s chops in the melodic department really shine here. The primary melody gets bent and angled in entertaining ways throughout the song with rhythm guitar and synths joining the mix later on (Lee also does the synth programming on the whole record, as well as bass, a norm for his stuff). It’s about as ’80s as you can get in a way that’s more a keen homage than a one-to-one emulation of that style, and all the better for it.

That’s what makes this whole project worthwhile – even if you don’t know who Lee is or what else he’s done, his work here retains identity to itself regardless of how blatant it shows its influences. Lee may have his guitar heroes, but he was clearly out to throw his own hat in the ring, for fun if nothing else – the basis of many a great music project. Songs like “Teela’s Luck” (a Masters of the Universe reference?) and “Maybe” show the breadth of writing and prowess that he’s built up doing various projects of the year from death metal to grindcore, but he knows as well as I that not everything has to be eye-squishingly heavy or sound barrier-breakingly fast.

As “A Better Tomorrow” sets a somber tone for the end of the album with eloquent organs in the intro before calling in another salvo of ripping guitars, it’s easy to see that Andrew Lee had a hell of a time writing and making this record. Looping Heavy Metal Shrapnel throughout most of your day stands to be a boon for your energy, like aural coffee. You may find yourself randomly breaking into some air guitar, or maybe pounding out some drum patterns (provided on the album by Alex Zalatan of Ebony Sorrow) with your feet. Either way, it’s infectious, doubly so for someone with a penchant for ye olde heavy metal and its tendency of shreddy excess and magical melody. So get a flak vest and jump into the pit with Heavy Metal Shrapnel for a great time.