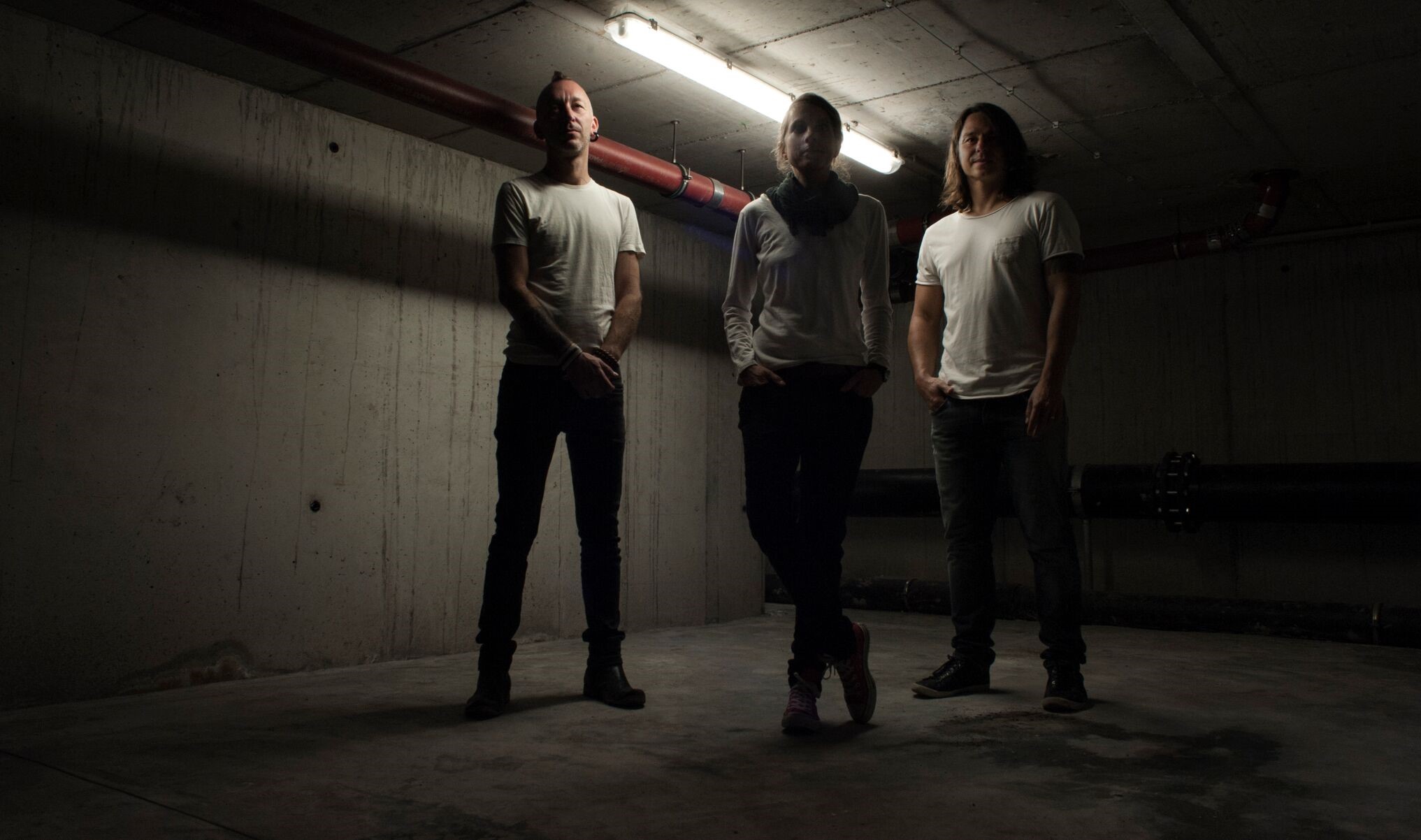 Monophona Push and Pull with Their New Single, “Elastic (I do)”

Since the release of their first single in 2012, Luxembourg-based trio Monophona have been creating a hypnotic blend of folk, electronica, and trip-hop. Their meticulously layered songs weave together melancholic vocals, shimmering acoustic guitars, lo-fi drums, and tastefully selected samples. Today, we are pleased to premiere their new single, “Elastic (I do)”, and its strangely beautiful music video.

“Elastic (I do)” begins by creating a fragile, intimate atmosphere, just an acoustic guitar, vocals, and a knocking sound, perhaps the beating of a heart. It is accompanied by images of a woman dancing amidst thin ropes, as if caught in a web. The music stretches and pulls like the ropes in the video, struggling to break free at points, and the lack of natural light matches the use of electronic elements. The drums are tight, boxy; wonderfully complementing the simplicity of the acoustic guitar and electronic layers. All of these elements exist to support the vocals, whilst also retaining their own integrity. Focus in on any one of them, and you will notice the precision with which it has been executed.

The second chorus breaks away from the electronic, leaving space for the more folky elements of the song – understated acoustic guitar, and the beautifully harmonised vocals. Both the music and the video are mesmerising, dream-like, and before you know it, the song is over, the dream has come to an end, leaving only a lingering impression of something needing to be remembered at the back of the mind.

Despite the song’s opening line being ‘I don’t want to talk about politics’, Monophona explain that it is, in fact, a political song, about watching people live their lives freely whilst being trapped, in cases ‘such as political prisoners living in countries where expressing one’s opinion can be a matter of life or death, or victims of domestic violence that cannot seem to break free from the vicious circle they find themselves trapped in’. In a similar way, the song also addresses the fates of sick people, the elderly, and people with disabilities in the midst of the coronavirus pandemic, unable to leave their homes ‘while their fellow human beings are already impatiently streaming back into the DIY stores’. Monophona end the explanation of this part of the song with a question: ‘To what extent are we prepared to make concessions and show consideration so that everyone in our society can lead a good life?’

Beyond this interpretation, the song also questions our legacy as individuals. About this aspect of the song’s meaning, Monophona state:

‘The song is also about the objects that we leave behind after we disappear. While our predecessors passed on furniture, porcelain, photos or clothes to the next generation, the goods we buy today are discarded tomorrow. Ikea or H&M encourage us to constantly redecorate our interiors and renew our wardrobes in order to reinvent ourselves. What will be left of us? Maybe just a colourful, flickering flow of data and images that no longer makes it possible to see the big picture?‘

Unfortunately, “Elastic (I do)” also marks the end of Monophona. After nearly a decade together, three albums, and dozens of live shows, the band have decided to release their last song – this one.

‘With great regret we have to announce that our new single “Elastic (I do)” will also be our last. After almost 10 years, we have decided to wrap up Monophona and call it quits. We enjoyed the last decade of making music, of playing live, of traveling together and we wish to thank everyone we met along the way: the people who came to our gigs, the crews we could always rely on, bands we shared a stage and a touring van with, everyone who worked in the background to help us release our music. A special thank you goes out to our label Kapitän Platte, thank you for letting us be a part of your family. We really appreciated it.

When we started playing together in 2012 we were mostly single and childless. Throughout the years, families have grown, responsibilities have increased; all the while it has become ever more difficult to make a living playing music. The music industry has changed profoundly: we always loved taking our time to make albums and that was our way of communicating with the public. We were never very comfortable with the idea of social media and with having to create a constant flow of images and messages, when we would much rather just have written some songs. Somehow we feel like it is all moving a bit too fast and that we cannot keep up with the manner in which music is made and marketed today.

We wish to thank you again for your continuing support throughout the years and hopefully we will meet again soon!‘

There’s something bittersweet about “Elastic (I do)”, something deeper than the plaintive vocals and haunting visuals. At the heart of the song lies a feeling somewhere between longing, regret, and resolve – a confidence in feeling acceptance. It seems oddly fitting that this should be Monophona’s last single. The lines ‘does this mean you still think of me?’ and later ‘does this mean you remember me?’ almost sound like questions the band will ask their fans a few years down the line, “Elastic (I do)” a constant reminder of everything they created, achieved, and the lives they affected with their music.

Monophona have been very busy over the last nine years, and left us plenty to appreciate. Check out their earlier releases on Bandcamp or visit their Facebook page to see how they spent their time together.