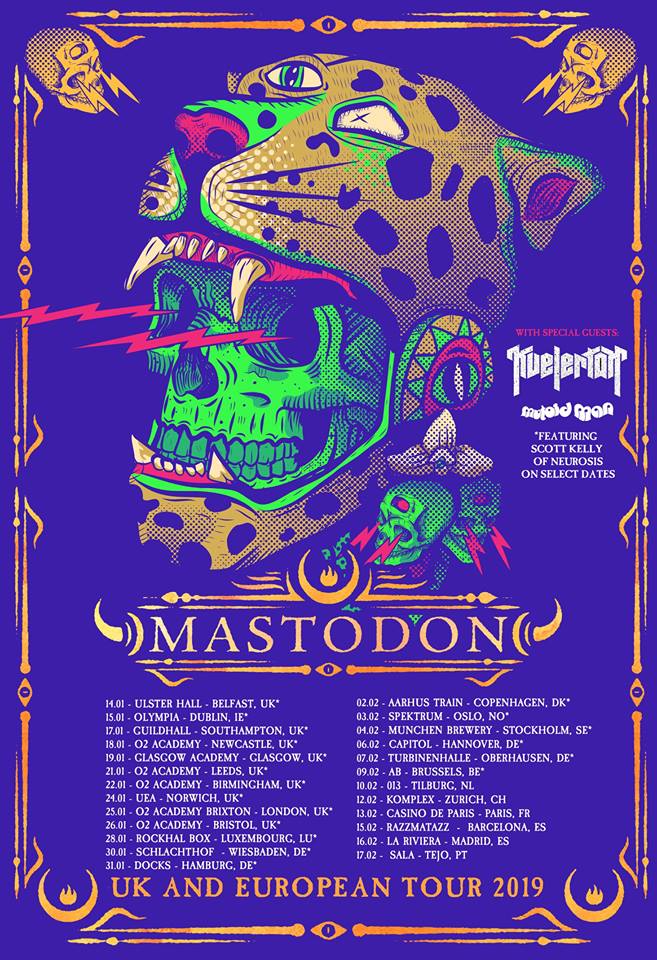 Mastodon Take Kvelertak And Mutoid Man Out on European Tour

Wow, what a line-up! As was just announced by the bands involved, there will be a tour consisting of Mastodon, Kvelertak and Mutoid Man in 2019!

Yep, your eyes are indeed still intact! Grammy Award-winning sludge/prog metal outfit Mastodon, after releasing their full-length album Emperor Of San and an EP called Cold Dark Place in 2017, the band toured with Red Fang and Russian Circles that same year and recently had to cancel an US tour with Dinosaur Jr. due to the tragic loss of their bandmanager Nick John. Now they are coming back to Europe with the rabid Norwegians in extreme hardcore/rock outfit Kvelertak.

Kvelertak, who just supported Metallica on their ‘WorldWired Tour’ in 2017 and 2018, haven’t released anything since their third opus Nattersferd in 2016. They previously hinted at new material in 2019, keeping with their existing three year album cycle (Kvelertak was released in 2010, while their sophomore record Meir was released in 2013). So maybe this tour might be full of new songs!

The second support is coming from NYC-based band Mutoid Man, who might as well have new music coming up too. A look at their repsective album cycles might at least promise a new record every two years, as their debut EP Helium Head was released in 2013, followed by 2015’s LP Bleeder, and War Moans in 2017! There’s yet another cookie hidden in this announcement for some of us: Scott Kelly of Neurosis is going to join Mastodon on selected dates, which are marked in the following!

The tour schedule is the following:

* with Scott Kelly of Neurosis

Make sure to get your tickets! They’re available on Friday, Oct 26th at 11am CET over here. Also, make sure to follow the three bands’ Facebook presences for updates (Mastodon | Kvelertak | Mutoid Man).