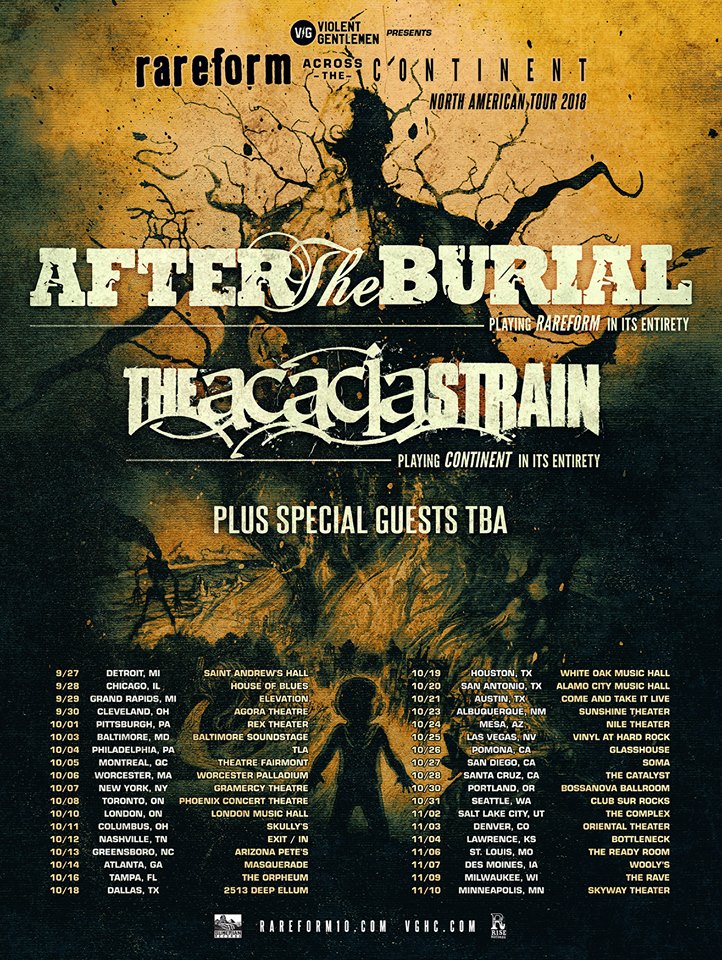 Djent and deathcore will unite with two popular bands retreading 10-year-old albums across North America this fall. After The Burial will play the entirety of their 2008 Rareform album, a work most fans seem to consider to be their best. The Acacia Strain, in a move likely meant to follow ATB’s 10 year anniversary theme, will play through all of their Continent album, which was also released in 2008.

No opening bands have been announced at this time of writing. While both After The Burial and The Acacia Strain appear to have equal billing, both bands’ Facebook pages list this as an ATB tour, so the Minneapolis band is almost certain to play last at each gig.

Here are the dates.

Bands generally conduct ‘full-album playthrough’ tours to fill in time between albums when they have already toured for their latest release. That description is most apt for After The Burial in this case. Dig Deep came out in early 2016, a respectable return for a band that had recently suffered the tragic loss of founding guitarist Justine Lowe. ATB toured for that album with only one guitarist, who generally played leads while the majority of the rhythm playing was done with a backing track. After The Burial have not announced a new rhythm guitarist, so they are likely to continue playing live this way for this tour. 2008’s Rareform showed the band at the forefront of the then all-but-unheard-of djent subgenre.

The Acacia Strain in contrast only released Gravebloom last year, and they have yet to tour extensively in support of it. Their decision to play an old album rather than more recent material is rather curious. Continent was an affably dark album, though not as strong as other albums such as 2010’s Wormwood.

More information can be found at the tour’s web site.