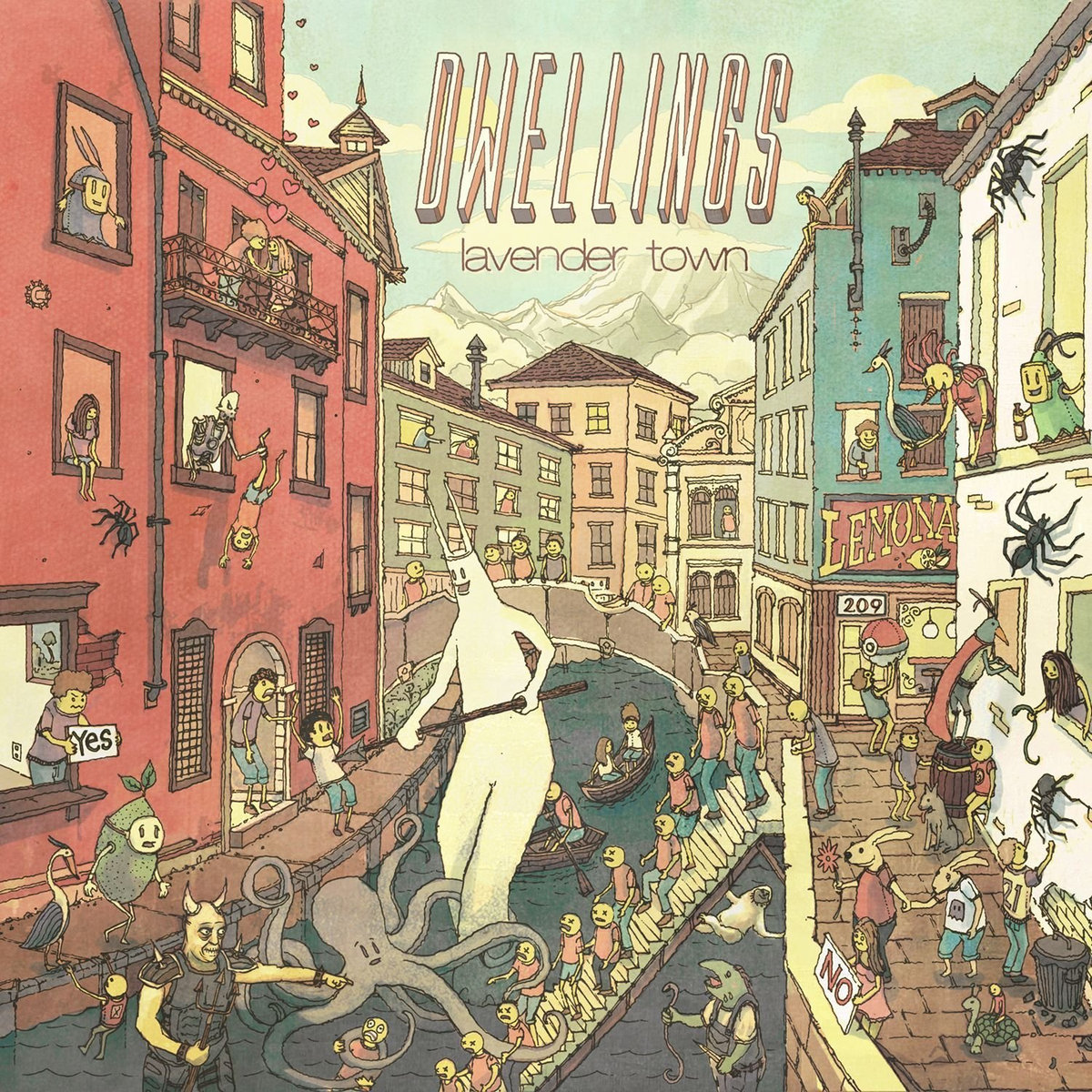 Dwellings set themselves apart from other post-hardcore with winding song composition and flowing grooves on their debut LP Lavender Town.

Of all the genres and sounds in rock music in 2018, post-hardcore doesn’t really have much going for it. I mean, the most recent thing I remember hearing from that era was that single From First To Last put out last year, and it didn’t exactly do anything for me. So when a particular genre becomes stagnant, how do innovators make their music new again? Why, they add sounds from other genres, of course! And Lavender Town by Dwellings is what you get when you mix post-hardcore and emo with elements of math rock. The result? Progressive goodness.

For a band that fits under the post-hardcore label, you’d be surprised how many tracks move past the five-minute mark. For the most part, Dwellings makes sure to use this time wisely. On one of the first tracks on Lavender Town, “Sins as Wonders”, the band starts things out simply. Beginning with twinkly, swarthy guitars that sound like an early Chon song, the song quickly picks up to a gallop as the singer pines that “Fake love is not hard to find”. And even after the song shifts from watery arpeggios to an all-out chorus, the tempo flips into a trot at about 4:16, and slows yet again as mournful chords accompany the final vocals.

There’s also the beefy “See It Through”, which is definitely one of the gems of Lavender Town. There’s a lot of Hail the Sun worship to be found here, from the bouncy riffs in the first minute and a half, to the stop-and-go interlude two minutes in. Then comes a rising breakdown where the singer pines that drugs “sometimes makes my entrails feel betrayed” on top of these gorgeous vocal harmonies. In fact, some of the best vocal takes land on this song, including the short burst of screams in the beginning and the soaring wails towards the end. This track feels like 3 or 4 songs packed into a surprisingly tight 5 and a half minutes, and each one is either sugary sweet or catchy as hell.

After “Sins as Wonders” is “Foreverest”, easily my favorite song on Lavender Town. What it lacks in tempo changes of tracks like “Sins as Wonders” and “See It Through”, it makes up for in steady grooves. Even though the pulse of the song is fairly repetitive throughout, I love how different each segment sounds from the last one. That refrain of “Tears flowing down her cheeks/Are colder than the peak of Mount Everest…” becomes more infectious with each listen.

“Lemonade” is another five-minute-and-change track. One of Dwellings‘ early 2016 singles, it’s not all over the place like “Sins”. And even though the song kinda sags under its own length, it kinda stays interesting by maintaining its steady pace. While this is another song on which the vocal passages really shine, the guitar work isn’t quite as exciting as previous songs. By this point on Lavender Town, I feel as if these sounds have been done better justice elsewhere.

And by elsewhere, I mean the song “Snake Charmer”. Another song with a more constant tempo, this one has some guitar licks that appear to roll off the neck. I guess you could also call it one of Dwellings‘ heavier songs, due to more dirty vocals and chuggier guitars. Complete with a resounding finale and flickering guitar outro, “Snake Charmer” is one more surprise in the mystery box that is Lavender Town.

I waited over a week for the songs on Lavender Town to bore me. I thought for sure that these 5-minute tracks would wear thin after a while, but I’m glad to say that I was blissfully wrong. Not only are these tracks not bloated in length, but their different parts serve their purposes without overstaying their welcomes. And they do so while shoving catchy earworms deep inside my brain, which I doubt I’ll be able to shake out for another week. All while offering post-hardcore fans a much-needed breath of fresh air.