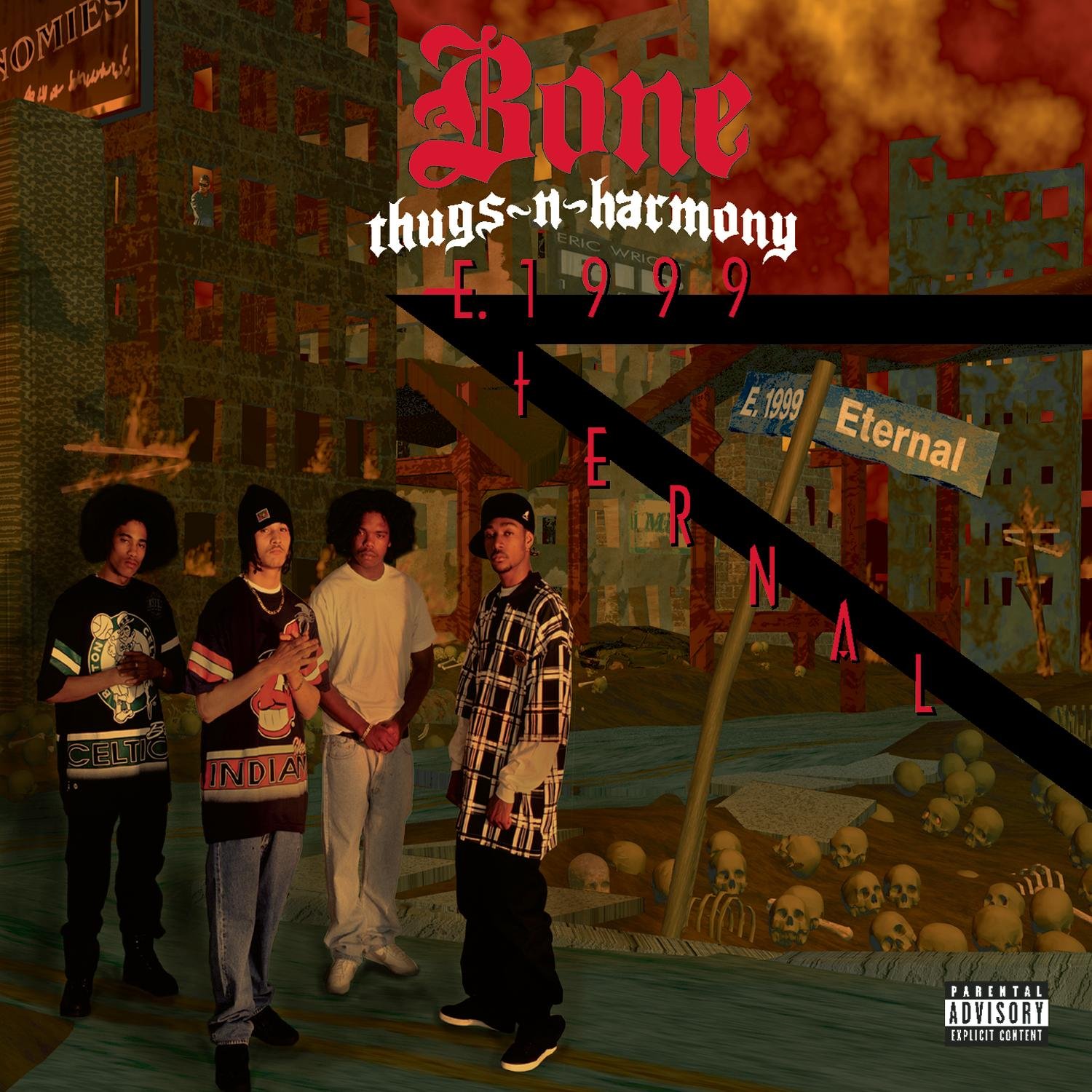 I’ve said it before and I’ll say it again: hip hop is not my field of expertise, and thus I don’t feel like it’s my story to tell – if that makes sense. Instead, I prefer to let others do the talking, which in this case of Bone Thugs-N-Harmony would be my much more well-versed colleagues David and Billie. The group’s 1995 release E. 1999 Eternal is considered a classic for many reasons, and so I would leave it to the aforementioned duo to tell you exactly why that is.

Bone Thugs-N-Harmony were easily one of the most influential rap groups of the 1990s. I truly believe the sound of rap today would not be the same if it were not for Bone Thugs. E. 1999 Eternal in particular is a landmark album for the genre, and it’s one that holds a special place in my heart as well. This album came out when I was only a year old and was a regular in my sisters’ listening rotation while I grew up. I vividly remember listening to “Tha Crossroads” sitting in their bedroom. It’s one of my earliest memories, and more importantly for this writing, it was my first taste of hip-hop.

For quite a few years Bone Thugs were the only rap group I liked, and it was for one of their most unique and prominent aspects. I loved the singing to their songs, but also liked the blistering bars interspersed. Most other hip-hop I heard at that age didn’t have that balance and it just didn’t click for me like this did. It’s easy to argue there wouldn’t be rappers like Drake or Tech N9ne if it weren’t for the popularity of Bone Thugs. They balanced incredibly melodic singing bits filled with harmonies from the entire quintet in “Tha Crossroads” with blistering bars that got them respect from gangster rap fans with tracks like “Mr. Bill Collector”. All of this was done with catchy and memorable G-funk beats, AND they incorporated really dark lyricism to help elevate the evolving horrorcore movement.

That all sounds impressive enough as is, but those are all elements that were popularized from hip-hop subcultures all around America. This was a period where hip-hop rivalries were still raging, and Bone Thugs shrugged that aside and took some of the best parts of it all, making the absolute masterpiece that E. 1999 Eternal is. The group is featured on Midwest classics, West Coast classics, and Southern hip-hop classics playlists on Spotify, and for good reason. This is a truly eclectic rap album at a time where that just absolutely wasn’t a thing.

Bone Thugs did their own thing from the start, and were bold in a lot of their moves. These are the guys who pooled their money together for one-way tickets to LA to try to track down Eazy-E so he would give them a chance. It’s no wonder that he did sign them when he heard them, because it doesn’t take a genius then or now in my opinion to see the greatness of Bone Thugs-N-Harmony. Even people who don’t like hip-hop usually can appreciate some of their tracks and moments. My dad is your most average middle-aged white guy ever, and even he will admit he’s always liked “Tha Crossroads”. Bone Thugs were Boys II Men meets N.W.A. and had just as much impact as both those other acts did on our music today.

I don’t think it’s an exaggeration to say that we wouldn’t be where we are now with hip-hop and r&b if it weren’t for Bone Thugs-N-Harmony. Rappers sing, singers rap – it’s not a new thing, but it’s something that really took the world by storm as of late. Artists gotta be that (at least) double threat. Throw in autotune and you have the basis for most of pop rap’s mainstream make-up for the last decade. But, I’d like you to consider, would we have had this massive of a melodic movement without BTNH?

Forming like motherfucking Voltron out of Cleveland, Ohio, Bone Thugs-N-Harmony – then called B.O.N.E. Enterpri$e – was comprised of Bizzy Bone, Layzie Bone, Krayzie Bone, Wish Bone, and (somewhat unofficially at this time) Flesh-N-Bone. Signed to Ruthless Records by Eazy-E in 1993, they released a bomb (in a good way) of an EP called Creepin on Ah Come Up. It featured classics like the title track, “Thuggish Ruggish Bone” and “Foe The Love of $”, which featured Eazy-E himself.

Produced 50-50 by DJ U-Neek and Eazy (with a little assist from DJ Yella on “Foe The Love of $”), it had a profound G-funk influence, but way slowed down, darker, and atmospheric. If “Nuthin But A G Thang” and “Gin And Juice” embodied the sunny California gangsta lifestyle of the ‘90s, DJ U-Neek and BTNH’s take on it was the apocalyptic sky with a red sun and smoke choking the clouds on the cover of E. 1999 Eternal – in other words, Cali during wildfire season.

E. 1999 Eternal was the natural progression for the quintet, really digging deep into the malaise of consumingly violent gangsta life, so much so that it really verged hard into horrorcore at times. BTNH, though they hold belief for a singular god (‘God is who we praise, even though the devil’s all up in my face’ – Layzie on “Tha Crossroads”), have a few references to the occult, and the overall mood of the music would definitely be a downer were it not for the supreme catchiness and melody of the Bone boys’ flow-heavy rapping. The mass grave on the album’s cover is about the only ominous sign you need aside from the aforementioned sky to know that killing was their business, and business was good if their songs were anything to go off of.

“1st of Tha Month” was the first single released from E. 1999 Eternal, and what a track to lead with. Called a ‘welfare carol’ by Chris Rock, it’s an oddly feel-good track about the monthly come-up – getting that government check in the mail (direct deposit wasn’t as common in the mid-’90s), being able to afford food once again, get a little something to calm your nerves, or otherwise celebrate with your friends and family.

Anyone that’s lived from paycheck to paycheck, crippled by anxiety and depression during the last week or two of a month because your bank account was in the single digits – if in the black at all – will know exactly what that feels like, but it rings even truer in the ghetto where BTNH hail from, where a myriad of systemic issues renders entire communities into a state of hopelessness, forced to sell drugs, rob, or scam to get by outside of the G-man’s meager assistance.

The soul of the album – and the group as a whole – is “Tha Crossroads”. Most everyone has heard this song, but did you know it wasn’t the original album cut of the track? That would be “Crossroad” – it was remade as the Mo Thug Remix by DJ U-Neek, but simply called “Tha Crossroads” and it became the smash hit it still is to this day. Eazy-E’s untimely death led the group to rework the song to include a few tributes to him along with other more personal losses the members suffered over the years.

The result is a genuine, heartfelt track of celebration, mourning, and tribute that really, really resonates with anyone who’s lost someone close to them. Seriously, a cursory glance of the comments section of the official video sees several people telling their stories of losing someone, or almost becoming lost themselves, and how “Tha Crossroads” was a song that either comforted them or one that the deceased liked. It’s… truly beautiful to see people identifying with a song like that and goes to show why it’s so impactful. The chorus echoes the sentiment that these commenters seem to hold: ‘See you at the crossroads, crossroads, crossroads (so you won’t be lonely)’.

These two singles are rare outliers into a sunnier side of Bone Thugs-N-Harmony’s reality-made-art. Shrill synths and pianos seem more cleanly ripped from G-funk’s more palatable, upbeat origins, a stark contrast to the sinister attitude of “East 1999” or the action movie-esque prison break story of “Down ‘71 (The Getaway)”. Or what about the track “Eternal” that interpolates a flute-like melody from Mortal Kombat clone Eternal Champions?

My favorite song, if I had to pick just one, is probably “Crept and We Came” with its groovy-ass bassline and synth whistles. The flow of the chorus is endlessly catchy and each of the five members (all five Thugs only appear on five songs together here, so it’s an event when they do) bring their own unique flavors with their verses to assert dominance and rep their set with this loose sequel to “Creepin on Ah Come Up” from their first EP.

Bone Thugs-N-Harmony were – are – an integral piece of hip-hop history, showing that you could do something different with your music without losing street credibility or that hardcore edge that was becoming increasingly more popular throughout the 1990s. They were legends for it, and some of the biggest acts of the time collaborated with them – did you know that the group had songs with both 2Pac and Biggie? One of the few artists to do that, ever. It also spoke to their greater ability to bridge gaps between a fractured, heavily regional, and competitive rap scene in the US that started deadly rivalries and bitter battles between the country’s two coasts. Though their overall sound was considered to be of West Coast origin, their Midwest heart never left them, and they could adapt to pretty much any style they found themselves in the presence of.

E. 1999 Eternal is a significant album for the sole reason of introducing the greater world to five dudes that could kill you with some of the quickest, cleanest rapping and singing of the time. It was a shame that some internal disagreements and legal troubles would mean the fivesome would infrequently reunite in full in the coming years until 2010’s comeback album Uni5: The World’s Enemy, which I consider one of the best comeback albums of all time. This album is a dark testament to the reach they had and, I’ll reiterate, great influence on the modern rap, r&b, and pop landscape that’s generated several platinum selling, well-respected artists that effortlessly glide between hardcore and harmony.