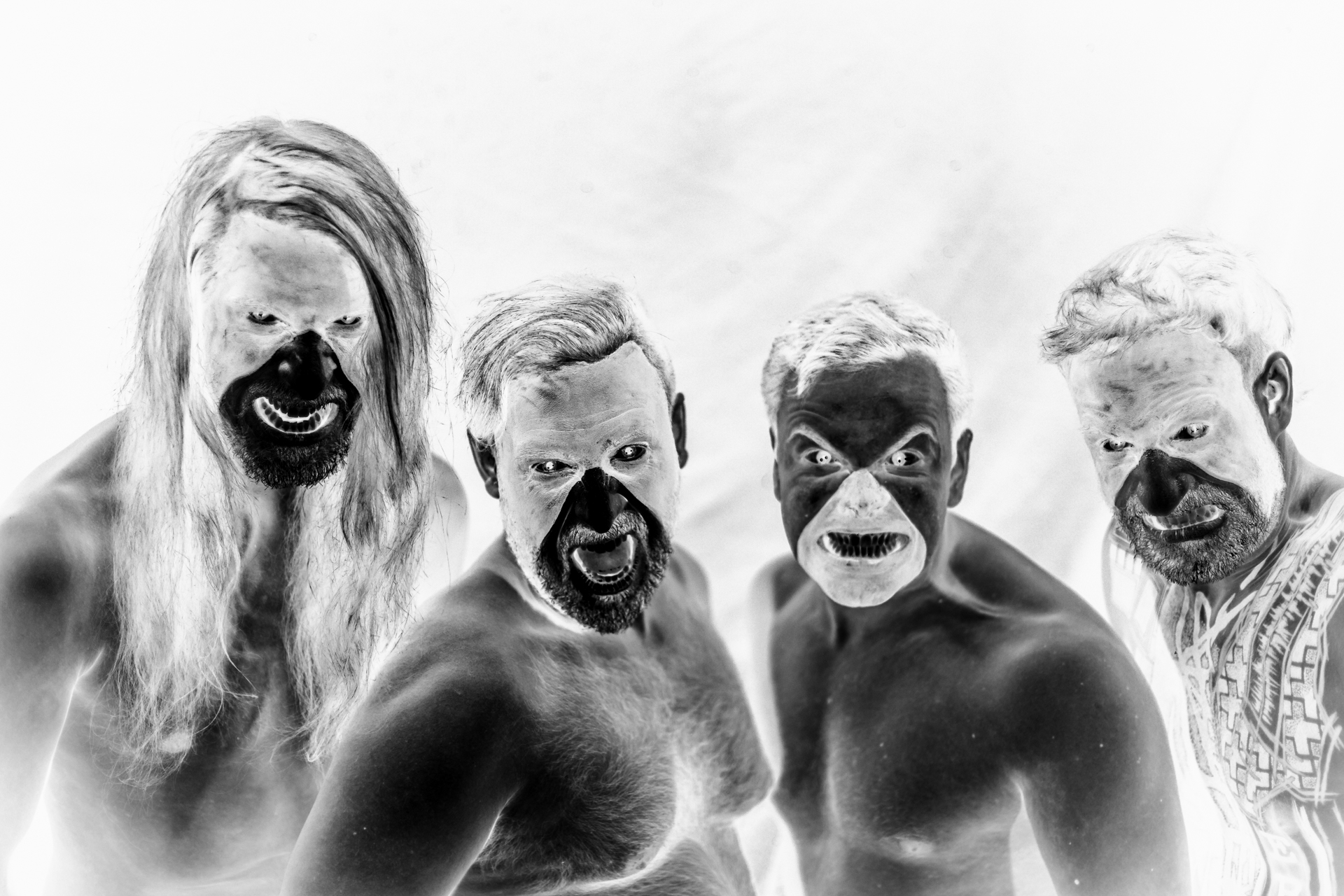 By Dominik BöhmerJanuary 13, 2020 No Comments

Here in Germany, we have a saying that goes as follows: ‘Was lange währt wird endlich gut’; basically, it’s meant to express the fact that while a task might take a long time to accomplish, it’s eventually going to turn out well. This couldn’t be any more true for today’s WFA. I’ve been wanting to work with VERDERVER again ever since 2016, when I accidentally stumbled across their Vlog documenting the ‘Scum Grind IV Life’ European tour they went on with Waco Jesus and Cliteater and really enjoyed their aesthetic and personalities. While they did eventually contribute to my The Summer Jam feature, it took us almost four years to get together again. I’m sure these guys can tell you a thing or two about patience and time-consuming tasks as well, though.

First of all, you have someone outside of the band’s four members to thank for VERDERVER even existing in the first place. To be fair, some ‘informal talks about forming a band’ had already taken place among them, but it took a tour invitation from Shane Bottens of the aforementioned Waco Jesus for them to actually act out on their intentions. Without a name, concept or any lyrics and with only a handful of previously written songs, they accepted the offer and played their first official show less than three weeks later, at Helvete in Oberhausen, Germany. So how exactly did they arrive at VERDERVER as the moniker for this new band? ‘VERDERBER existed already.’ Fair enough.

Inspired by bands like The Prodigy, The Dillinger Escape Plan, The Algorithm, Enter Shikari, Dying Fetus, Japanische Kampfhörspiele, and Korn, as well as the current modern zeitgeist of fear-mongering and apathy, VERDERVER have carved themselves a musical niche they dubbed ‘dance death metal’. November of 2016 saw the release of their first single “GEBRAUCHSWERT”; the song capably showcased the raw potential of their brute force take on the cybergrind trope. Afterwards, things went relatively silent on their end, though – their full creative independence and the inescapable pull of everyday responsibilities had stifled the band’s progress. In June 2019, they finally unveiled their second single, “ARTFREMD”, and all of a sudden the thought of a full VERDERVER album appeared to be more than merely wishful thinking again. Let’s just say that the wait wouldn’t last too much longer from there.

One thing that’s sure to be attention-grabbing for any newcomers to VERDERVER is the band’s black-and-white body paint, which they don throughout all their live shows, music videos, and photo shooting. Not only does it act as the key unifying factor of their visual aesthetic, but it also ties together the band and the concepts and ideas they discuss through their music. There’s a philosophy behind what might easily be misinterpreted as an eye-catching gimmick or a simple aesthetic choice.

Everything Is Noise: What’s the meaning behind the body paint you put on for your shows and music videos? Was that a purely aesthetic choice, or is there an underlying message to it you are trying to get across?

VERDERVER: Our body paint is the transformation into something inhuman. VERDERVER is the antihero who smashes everything – all of your ideals, imaginations and comfort zones. It’s a ritual before the shows to escape that human corset – to become the VERDERVER. Besides that it symbolizes the black and white thinking of the masses. There is much more than two contrasts, everything has different sides to it.

Another important part of the VERDERVER experience are their intense live shows, where they routinely break the imagined fourth wall between the audience and the performers by getting off stage and roaming freely around the venue. Especially vocalist Sebastian tends to shatter any perceived separation between his band and the crowd. You’d be forgiven to assume that this is planned, a choreographic element to their performance. But no – as the band members themselves put it, these instances are ‘happy little accidents [that] break the line between the audience and the band.’ I have witnessed this myself at Euroblast 2016, and let me tell you: it can get a bit uncomfortable if you’re not the confrontational type around strangers, but it ultimately fits VERDERVER’s music and aesthetic so well that you wouldn’t want it any other way.

This past Friday, on January 10, 2020, the band finally released their début full-length album called Weltunter via Sickpeopledie.. It was produced by Rémi Gallego (whom most of you will know as the mastermind behind The Algorithm), and features Nikita Kamprad of Der Weg Einer Freiheit fame on its final track “NADIR”. Stylistically, it continues the sound VERDERVER teased with their first single back in late 2016, while also allowing for a more well-rounded look at the mashup of genres they bring to the table.

I’ve had the privilege of spending some time with the album over the past two weeks already, and let me tell you: it’s worth the long wait – and then some! Across its ten tracks, it makes good on the promises made by the impressive lists of bands that inspired it. There’s math-y aggression, heavily pounding electronics, and all-out grindcore frenzy; these elements are in turn reined in by the occasional melodic part, but also by the surprising dose of social commentary and humor in the lyrics (which will sadly be lost on those among you who don’t speak German). The album’s overbearing sense of fury and discomfort always serves a purpose. And sure enough, you may be able to see where the band pulled their inspirations for certain sections from, but viewed as a whole, Weltunter sees VERDERVER already sounding like nobody else but themselves for the most part.

EIN: By the time this article will be published, your album Weltunter will already be out. Tell me a bit about its writing and recording process.

V: You can feel the chaos in our music. It’s a crucial element of how every piece of it comes together. There was no explicit plan or process. Every song has its own approach. Sometimes a song was written on guitar, another time beats and riffs developed from another, but ultimately nothing was written by one guy alone. Sometimes we locked us in for some days to write, then we met up for short periods in the evening to file on special parts. Finishing a song could take one single night or several months. The lyrics were written afterwards, also together, often in Berlin or Bremen.

The recordings with Rémi Gallego aka The Algorithm were pure fun. We met him on his ‘Brute Force’- European run where we played with him. He is a genius. We asked him to record our debut and luckily he said yes. We can’t thank him enough for this. We stormed his living room and recorded all instruments in the space of two weeks. It went a little bit crazy. Sleepless sessions, sludgy brains, total silliness, as well as intense straining of all our finger bones and brain cells.

Sebastian recorded the vocals later with Florin Kerber of Tausendsassa Studios in the space of three days. He exorcised the VERDERVER with all his fucked-up emotions in a way that was really frightening. He recorded in Berlin, cause this city embodies much of what we process in our lyrics. So the VERDERVER teased him exactly there, where it hurts the most. Also Florin is such a nice person, and that fit perfectly.

Taking stock of your previous successes is an integral part of moving forward in life. So I asked the band to look back on their (admittedly short) career and tell me what they consider to be their best moments so far. Here’s what they came up with:

‘Playing with The Algorithm, Igorrr, the Cavalera brothers and playing twice at Euroblast were absolutely phenomenal. But the best thing has been by far that this project took possession of us. We had no control at all. Also playing live is the incarnation of all of it – the concept, planning, ideas. This is the time where all of us come together from long distances to celebrate a completely different harmony and atmosphere. Also meeting a lot of new really nice persons from different cities and countries is just awesome. We enjoy that a lot. Sometimes it feels like a family is growing. These are the moments we enjoy the most.’

And what does the future hold for VERDERVER after those big moments? Essentially, they’re simply aiming to play more shows, create more music, and meet more people. Modest goals, but very much in-character for a group of people who have already proven their willingness to be patient and uncompromising when it comes to their art. I for one wish them all the best for the future – hopefully it won’t be another four years before hear from you again! For now, though, I’d like to yield the stage to the VERDERVER guys one final time for a message directed at our esteemed readership:

‘Just be kind to all your fellow human beings. For example, when you go into a store be sure to be nice to the employees. Give love, get love. Infect everything with sympathy. We can make our coexisting a little bit better with just easy things like that.‘

If what you’ve heard and read above has made you curious, please make sure head on over to VERDERVER‘s Bandcamp page to check out Weltunter and maybe snag a digital or physical copy if you’d like. Also, follow the band on their social media pages (Facebook | Instagram | YouTube) to stay in touch.