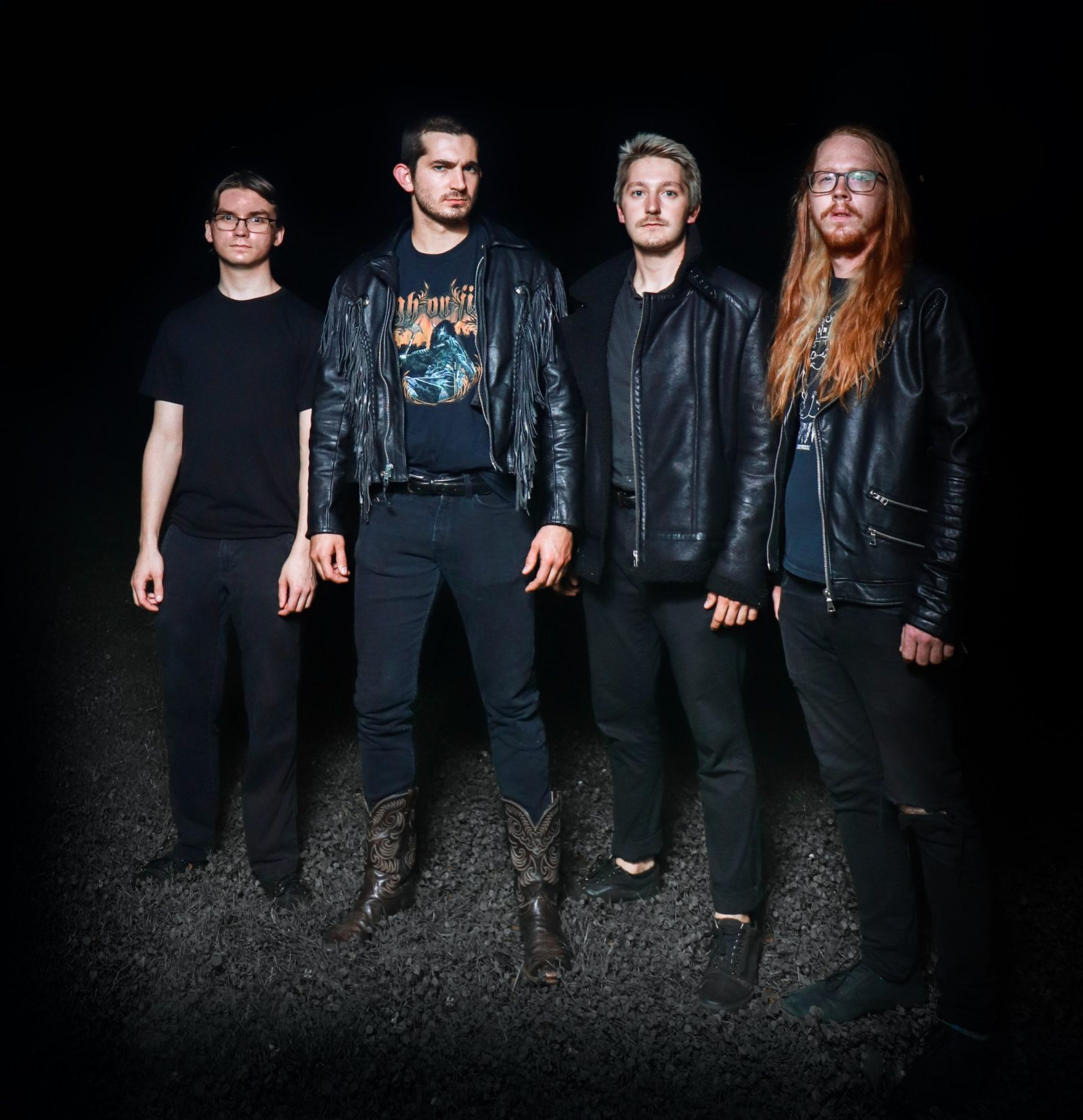 I mentioned in my review of Terminus‘ most recent album Fortune Looming that I couldn’t quite figure them out. I also said at the time that I wasn’t sure if the album would have any staying power. Well, the answer to that is a simple one; I’ve had it on heavy rotation since it came out! The amazing blend of power-pop, doomy riffs, Geddy Lee-like vocals, and sub-five minute songs makes it a seriously enjoyable listen. I recently reached out to the band to find out more and see exactly where this gem of an album appeared from.

FROM ORIGIN TO TERMINUS

A lot of bands start in high school. It’s almost like a tradition in rock. Terminus are no exception, although it’s surprising that they were originally focused on being a very loud three-piece sludge band. Extended sludgy jams are very much the antithesis of Fortune Looming. In guitarist Julian Thomas’ own words;

‘When we first started it was all about being as loud as possible. . . the music was all about big heavy riffs and trying to channel bands that we loved…’

This approach lead to them becoming part of the growing local scene in Little Rock. Another sludge band, Rwake, were a huge part of that scene, and at the time, Terminus fit in perfectly. Being part of this local doom movement obviously rubbed off on the fledgling band, and plainly gave them the chops to deliver some killer riffs. With their ever-increasing experience of playing live, the band organically grew to a four-piece. That change heralded a new approach to playing and writing:

‘Adding a second guitarist. . . allowed us to be more subtle on guitar and do things we couldn’t as a three piece. We were always into sludge and doom bands but we also . . . loved the accessibility and intelligence of well-crafted pop and rock music such as Bowie and Tears for Fears.’

Every good band has diverse music tastes. It’s one thing to like a wide variety of musical styles, but another to successfully combine these in your writing. This approach, mixing ‘poppy’ styles with their doom foundation, shows that Terminus are always looking to the horizon to seek new directions; this is evident with Fortune Looming in particular. Crackers like “The Way Your Heart Sings”, “Don’t Come To Close”, and “We Begin Again” are like listening to a masterclass in pop. The melodies, lyrics and rhythms could have easily appeared on a killer album from the 80’s. It’s also pretty clear that these influences are not just ‘tacked-on’ or a nod to the (currently) fashionable era of rock. It comes from the heart, and is tightly integrated into the band’s DNA:

‘…these elements. . . naturally began to incorporate themselves into our sound because we never want to remain stagnant. Each record has to have some sort of growth and progression. . . we wanted to get beyond just writing a string of riffs to crafting songs that tell stories and take you on a journey.’

STRAIGHT TO THE POINT

As I mentioned in my review, I found the short, fast-paced songs really compelling. Nearly all of the tracks are under five minutes in length. There are no widdly solos, extended middle sections or any of that guff. Each track is crafted with no wasted fat. That is not to say that each one is repetitive or derivative, quite the opposite in fact. Songs like “Down To The Wire” and “Beat To Quarters” speed through multiple sections. Post-rock, doom, and pop are all deftly combined. Just as you catch your breath, you’re on to the next song. It’s an exciting ride. This was a conscious effort for the band and it really paid off, as Thomas elaborates:

‘…our own approach with writing is to try and craft a song that blends hooks and riffs and hits you immediately. . . leaving you wanting more. It wasn’t planned per se, but we did approach this album thinking about how we can get away from the earlier proggy meandering we used to indulge in and create songs where each part is essential to making the song work.’

It works brilliantly. One of the reasons I have put this on heavy rotation since I first heard it is because I am indeed left wanting more.

I only really value lyrics on an album when they’re telling a good story. They need to be easily relatable to me or have some sort of humour or kooky take on life. In among the catchy melodies on Fortune Looming are some interesting lyrical themes. “Don’t Come Close” appears to tackle the fear of emotional attachment and a relationship gone wrong. It features great moments of whimsy like ‘You and I could fall asleep together, but I’m coming down with something, a bit under the weather‘ and ‘…but if my day keeps going this way, don’t come to close‘.

Another great example is “I Got Married”. It starts you off thinking that this is a joyous celebration. Until the lyrics reveal a darker side, that is: ‘I got married today, to my tombstone‘ and ‘I got carried away, his blood was dark and red‘. Heavy stuff, wrapped in what is effectively a three-minute pop song. In the band’s own words;

‘I think the joyful aspects of the lyrics in a song like “I Got Married” are balanced with a kind of melancholy. . . As an artist you just explore what sounds cool to you and moves you…

This sort of lyrical content is in stark contrast to the upbeat music, creating something different to the usual fare. It gives the power-pop focused songs some real depth. I asked Thomas what the band’s approach to writing lyrics was, and, like their music, it seems to be a simple and focused approach:

‘We’ve all had different life experiences and each song probably has a different meaning to each member of the band. We just try and be honest.’

Now that Fortune Looming has been released for the world to hear, what’s next for Terminus? The band are keeping busy alright. First of all they are releasing Fortune Looming on cassette with their local label, Tape Dad. In addition, they are playing a bunch of shows this year, including supporting Russian Circles on October 16 at George’s Majestic Lounge in Fayetteville (tickets). They are also currently booking a series of dates for December, so keep your eyes peeled.

As I said before, the short format of Fortune Looming was perfect and left me wanting more from Terminus. They’ve already started writing material for the follow-up. No definite plans for a release just yet, but be sure to check back with us. As soon as we get word, we’ll be on it and we can’t wait.

Terminus are a great example of what a modern DIY band can achieve in the 21st century. They have stuck to their guns, evolved over many years and just kept working hard at what they do. All this experience and passion has lead to Fortune Looming being one of my favourite albums of 2018. They now have some great momentum behind them so expect further exciting things from this awesome four-piece. To find out more about Terminus, check their Facebook page and pick up Fortune Looming on Bandcamp, Apple Music or Spotify and take it for a spin.