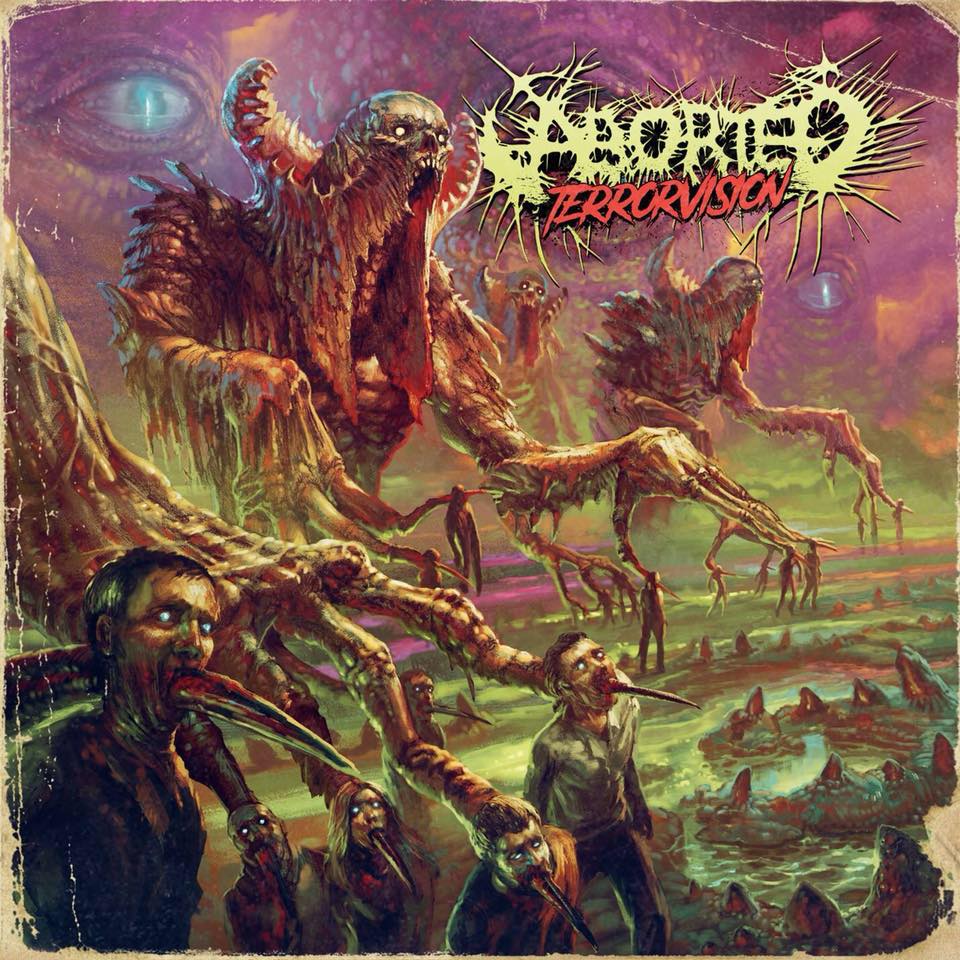 By Landon TurlockSeptember 17, 2018 No Comments

Aborted’s TerrorVision is a surprisingly modern and generally solid take on technical/brutal death metal for a band that has been active for nearly 20 years, but still incorporates some outdated tropes.

I always feel like I’m taking a bit of a risk reviewing a record from a long-running act without being familiar with them. I worry about missing out on the history and musical development of an act, as well as the community and microculture surrounding them. But I also hope that a new look at a long established group might be a refreshing perspective. So here I go with TerrorVision, Aborted’s tenth full-length since their inception in 1995 and my introduction to the brutal/technical death metal band.

You wouldn’t necessarily hear the age of the act in the way that TerrorVision opens – the atmospheric piano/electronic introduction “Lasciate Ogne Speranza” (translating to ‘abandon all hope’) is fairly de rigueur for contemporary death metal, and so is the polished, powerful production (replete with bass drops and breakdowns) that follows on the album’s title track. This sound is many steps out of the garagey grind of the Belgian band’s early releases, but the band isn’t worse for it. And fairly new guitarists Mendel bij de Leij and Ian Jekelis inject enough impressive riffs, gargantuan grooves, atmospheric countermelodies, and supersonic shred to satisfy almost any fan of the various strains of death metal. This variety is complemented by the surprisingly subtle and inventive drumming of Ken Bedene.

Though Aborted can, and do, demonstrate their penchants for technicality and speed with talent throughout TerrorVision, their incorporation of slower and more dynamic tempos and dramatic melodicism make the record considerably more interesting. This happens somewhat regularly throughout the album, but perhaps to greatest effect on “Exquisite Covinous Drama”. From the three minute mark on, haunting melodies, swaggering solos and impressively evolving drumming all make this a musical experience worthy of the album’s title, without resorting exclusively to all-out speed and grind to achieve it.

It is those aforementioned moments on TerrorVision that show Aborted’s maturation as a band. But other elements don’t – most notably in some of the band’s lyrics and visual presentation. Gone are the disturbing soundbites of albums past, but still in place are the band’s deeply violent aesthetics. Sometimes this imagery is used in an interesting way to explore important modern and political issues. However, we as a community can and should ask for better than violently misogynistic song titles like “A Whore D’oeuvre Macabre”. Harvey Wilks has written more eloquently than me on the assorted issues with content like this, but what it comes down to is that Aborted are more than capable of making impressive, sinister, and enjoyable death metal without resorting to dated and problematic lyrical tropes.

Aborted has always seemed to deal in strains of grindcore and death metal. TerrorVision seems to lean more to the latter, and incorporated increasingly pristine production and modern songwriting trademarks into it. Though some bands that have been around for 23 years might not make these changes seamlessly, Aborted seem to by maintaining their roots. As such, TerrorVision is an impressive modern death metal record, if one that is sometimes reliant on problematic clichés from decades past.