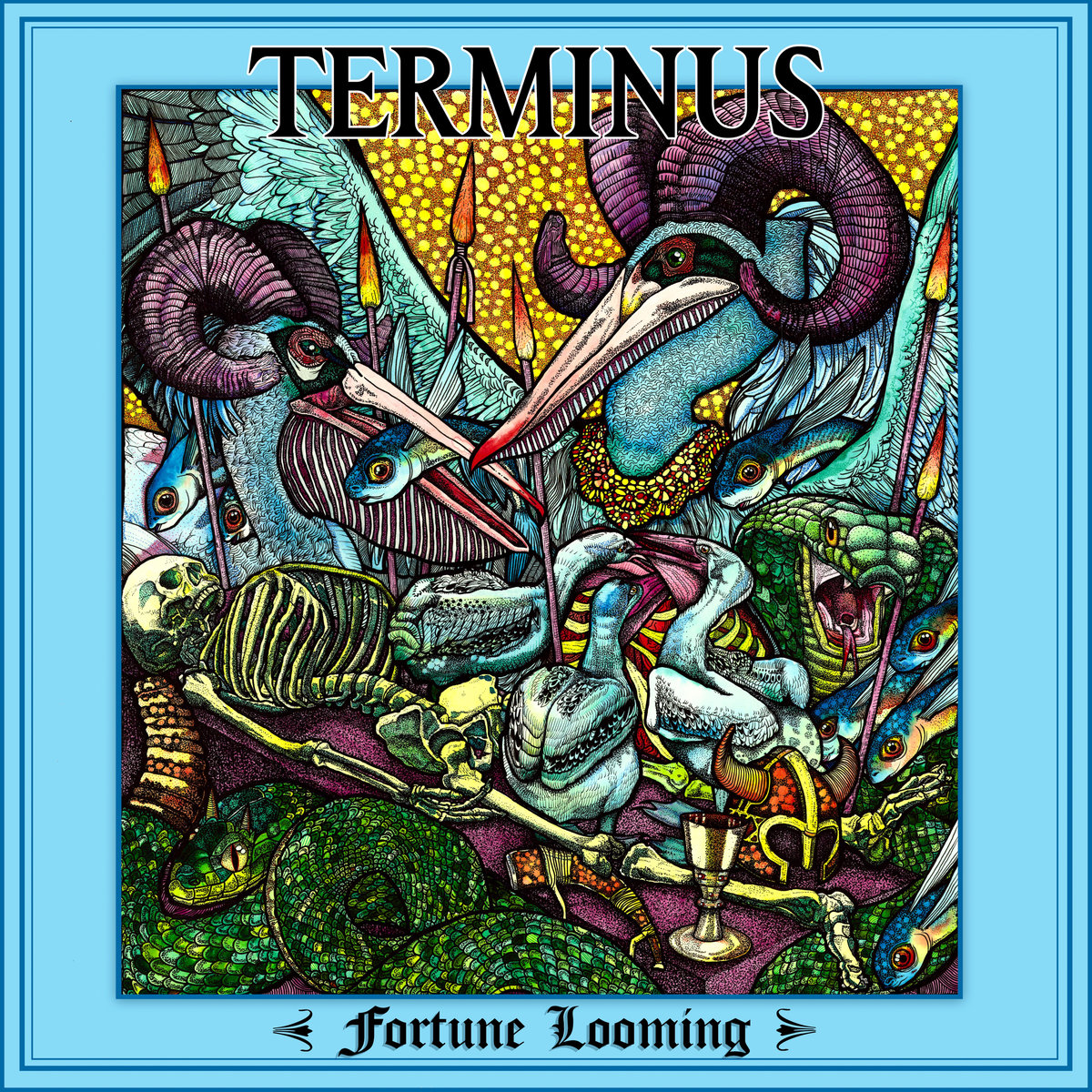 I can’t seem to figure out what Terminus are about, and I love that. If you are into the more ‘poppy’ spectrum of hard rock, you will have a good time with Fortune Looming.

What do we have here? Commercial modern rock combined with a unique vibe? Unexpected twists and turns all packaged into sub-five-minute songs? Interesting and hummable? Fortune Looming by Terminus manages all of this, and a whole lot more.

With a name like Terminus, I was expecting heavy sludge-tastic doom riffs and growly vocals. However, from the instant Fortune Looming starts, we get commercial chord progressions, happy rhythms and an 80s throwback vocal style. To be honest, my first impression at this point was, ‘This isn’t going to sustain my interest‘. Luckily, Terminus have an amazing ability to present new ideas to the listener as fast as a baby eating rusks. It all feels familiar but, at the same time, different.

After the throwaway, poppy opener of “The Way Your Heart Sings”, the next track, “Down to the Wire”, shows their true hand. A grittier, fuzzy sound dominates and we really get motoring. This is most welcome. The harmonized falsetto vocal reminds me of Claudio Sanchez from Coheed and Cambria (which, in turn, reminds me of Geddy Lee from Rush). The staccato style works really well and is a staple sound on a fair amount of this album.

The band continue to evolve before your ears. “Beat To Quarters” takes the fuzz sound a step further, even including doom style tempo changes. The falsetto vocals, harmonized guitar and mellotron layered over the top are quite at odds with this, sounding like some sort of Queen versus Sabbath mix. Odd? Possibly. Great? Yes!

The album continues to both surprise and spark interest, like a gift that keeps on giving. We’re offered some progressive/metal moments with songs like “Believe Me”, “Renown” and “The Hotspur”. These crank up the fuzz and feature really interesting arrangements, including pseudo 80s synth (actually guitars) and disco beats. “Stoke The Flames” even combines some djent, a Geddy Lee style vocal and an eastern tinged breakdown, all within four and a half minutes!

The rest of the album contains a great selection of modern pop influenced tunes, with the menace of metal and doom stirred in for good measure. “I Got Married”, “Don’t Come Too Close” and “We Begin Again” sound like something that could’ve featured on a classic pop album from the 80s or 90s, but got turned up to 11 and made into something really interesting.

This album flew by in a flash. I realized that there was never a wasted moment anywhere. The album is 11 tracks, 47 minutes and (apart from “Renown”) nothing is over 5 minutes! Songs kick in, the vocals hit pretty much immediately, the band play their arses off, adding new sounds and cool stuff everywhere, and then, in a blink of an eye, it’s on to the next one! It’s a formula that defines Fortune Looming and makes it a success.

New, interesting timbres and arrangements pepper the whole thing. From the bouzouki intro of “Beat to Quarters” to the sitar on “Don’t Come To Close”, they never let up. For a music lover like me, this is what makes Terminus special. Without these extra colors and sounds, the band would likely have been lost in a sea of other generic acts like Wolfmother, Artic Monkeys, Tame Impala… you know what I mean. Terminus seem to have a knack of crafting something super accessible, and sprinkle their own distinctive brand of eccentricity to make something that you’ll never have heard before.

ALL THE FUN, ALL THE FAIRNESS

The whole package is like the aural equivalent of walking into the hall of mirrors at a fairground – you recognize what you are seeing, but it doesn’t look quite right. The melting pot of the Coheed and Cambria vocals, Queen guitars and retro-pop-fuzz gel really well together. Of course, this only works if the band have the ability to write great songs, and Terminus certainly do. The eleven tracks all provide a mélange of solid head nodding riffs, air guitar solos and singable melodies. Will it stand the test of time and be something I listen to regularly? Possibly or possibly not, but I’m having a good time with it right now, and you should too.