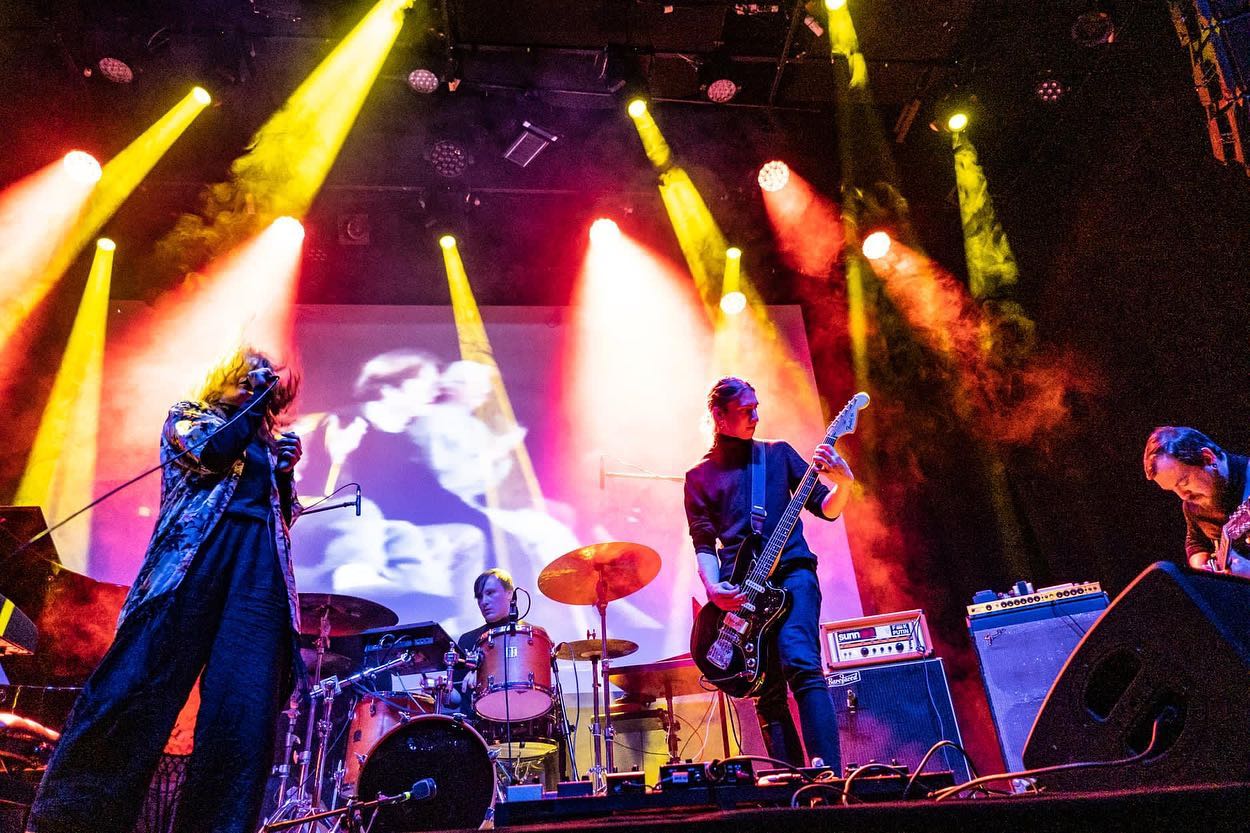 I initially encountered Pamirt, our current Weekly Featured Artist, when premiering their track “Bloodletting” earlier this year. I was immediately astounded by Pamirt‘s experimental chamber music and their ability to make minimalist, piano-driven tracks so dark and heavy without relying on traditional metal dynamics or instrumentation.

It comes as no surprise then that the haunting, bleak atmosphere of 2020’s Mausoleum developed out of previous involvement with a black metal band, eschatos. Kristiana Karklina, Pamirt‘s vocalist, pianist, and composer, explains further:

‘In a way, I could say that it was an accident; I started to write more vocal-oriented material that did not fit with the style and ambiance of eschatos, our black metal project. I showed some sketches to Edgars, who then added guitar textures and melodies; we worked together on the composition of some songs. When I started to work on a cover version of Patsy Cline‘s song “Crazy”, I realized that we were lacking the rhythm section and thus, I invited Edvards to take part.‘

Karklina’s musical roots go much deeper than her involvement with black metal, however:

‘My organist grandmother used to let me and my siblings accompany her to church and even play once in a while when no one was around; that left quite an impression on me.

From my mother’s side, my grandfather was an accordion player in a jazz band and a big music lover, so I spent my childhood listening to his tape collection that had old American jazz records, Louis Armstrong, Ella Fitzgerald, French singer Édith Piaf, and others. Later in my teens, I took piano lessons and became more interested in heavy music and extreme vocals. That is also how I met Edvards and Edgars; through music.‘

Karklina often brings piano and vocal sketches of Pamirt‘s songs to her group, fleshing them out with guitar and percussive elements through jam sessions in the studio. However, as with any composition, it can be difficult to tell exactly when to determine when the tracks are complete:

‘I often ask myself – how to know when a song is ‘ready’? But in reality, I think it never is, nor should it. Sometimes when we play live, we might change or make some part of the song longer or fuller, add or remove elements.

It is a flowing process.’

Despite Pamirt‘s Baltic roots, 2020’s Mausoleum was composed over two years in Berlin, Germany. In addition to eclectic musical influences informing the album, such as black metal, country, and religious hymns, visual art was also a significant source of inspiration for the record. Karklina discussed this further:

‘My academic background is art theory and history, so I have been looking at art and writing for six years of my life. I still turn to visual art as a source of inspiration. Sometimes it is the story and iconography of a painting, sculpture, or video artwork; other times, it is pretty formal. Lately I have been interested in Medieval illuminations and my nightstand is stacked with glossaries and bestiaries. Before it was pre-raphaelite painting and art noveu.

During the shoot of Mausuleum cover, me and photographer Lauris Aizupietis were discussing combining this very classical gothic setting with modern pink/blue lighting since the mask was made of iridescent plastic.‘

Recently, their three-piece line-up has expanded to include two more Latvian musicians for live performances: Jānis Emīls and Dāvis Burmeisters. Their contributions to the Pamirt‘s shows were especially meaningful after the band’s tour in Lithuania and Poland.

Having released Mausoleum in the middle of the COVID-19 pandemic, Pamirt now aim to tour in support of the record and continue writing for their next release.

If you like what you heard, you can purchase Mausoleum here, and follow Pamirt on Facebook. A limited second press of Mausoleum of only 100 copies on blood red vinyl is now available via Tartarus Records.