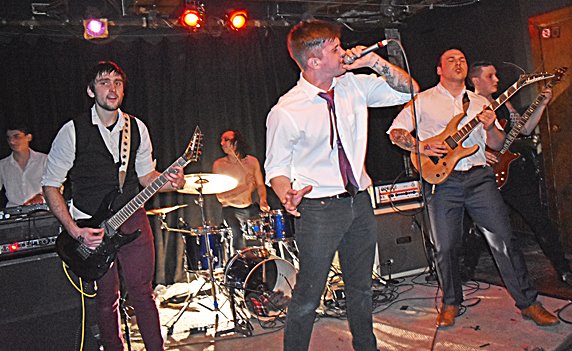 One of the purest forms of music is making music for the sole reason of expressing oneself. Many people find a purpose in music and playing, a healthy coping mechanism to vent their feelings. Today’s weekly featured artist, Needle Play, does just that, while creating music that is bold, experimental and a lot of fun.

But what exactly do Needle Play sound like? Well, it sounds like the world crashing down around you and you’re enjoying it. Between twelve tone piano runs, dissonant, almost grindcore-esque guitars, and manic screaming, there’s a certain sense of absolution to Needle Play’s music. Between all the screaming, the dissonance, and the frantic playing, there are moments or gorgeous beauty interwoven into the chaos. The guitars are very barebones, with only distortion thrown onto them for the right amount of aggression. Through the use of a grand piano and two guitarists, the instrumentalists are able to stack chords on top of each other’s parts to create vivid textures with a strong tension and release relationship to the music. Their lyrics stem mostly from Clark’s poetry, as well as the work of frontman Tyler.

Needle Play came together when the friends Anthony Clark and Heath Sousa became dissatisfied with their old project, Lord Gorgeous. They felt like they had pigeon-holed themselves into this singer/songwriter template, from which they felt the need to break out. So they scrapped everything and decided to set up a new project, driven by the desire to experiment with the sound of jazz bands they were listening to at the time and crossing it with hardcore/metal. Clark (first guitar) and Sousa (drums) started looking for additional members. Peter (bass) was their waiter at The 99 one night. They asked him to try for the band after discovering a shared music interest. Steve (second guitar) and Clark became acquaintances after college through the Boston music scene. Tyler (front man) was playing bass for another band. Sousa and Clark bumped into him at a Chipotle in Billerica and told him they were still looking for a front man, which coincidentally worked with his motivation to scream more. Jonathan (piano) was the last to come on. His father, Jeff, is an engineer for the company Clark works for. Jeff and Clark used to jam together and would occasionally invite Jonathan. After hearing Jonathan play, Clark begged him to be on board.

So now that you know how they came together, you might be wondering what exactly needle play is. I’ll let Clark explain this:

‘So needle play is a type of kink where people shove dozens, sometimes hundreds, of needles through their skin to achieve a heightened sexual climax. That being said, it’s also a type of body art where artists will use this same technique to create very intricate designs on their (or their subjects’) bodies. I had seen a needle play display at a sex shop in south Philly a few years ago. I just remember thinking ‘this is fucking incredible’, and I tucked the name away in my memory bank. For me it’s a great intersection of the grotesque and beautiful, of the horrific and sensual. That’s kind of what I was trying to achieve through the band, sonically speaking.’

Their debut album Cruel Spring, will be released on April 20. Needle Play instantaneously went to record a full length record instead of wasting any time on EP’s, coming to the public with an explosive eighteen track album. While the band themselves says they only do this for themselves, future releases are sure to come, so keep an eye out for them.