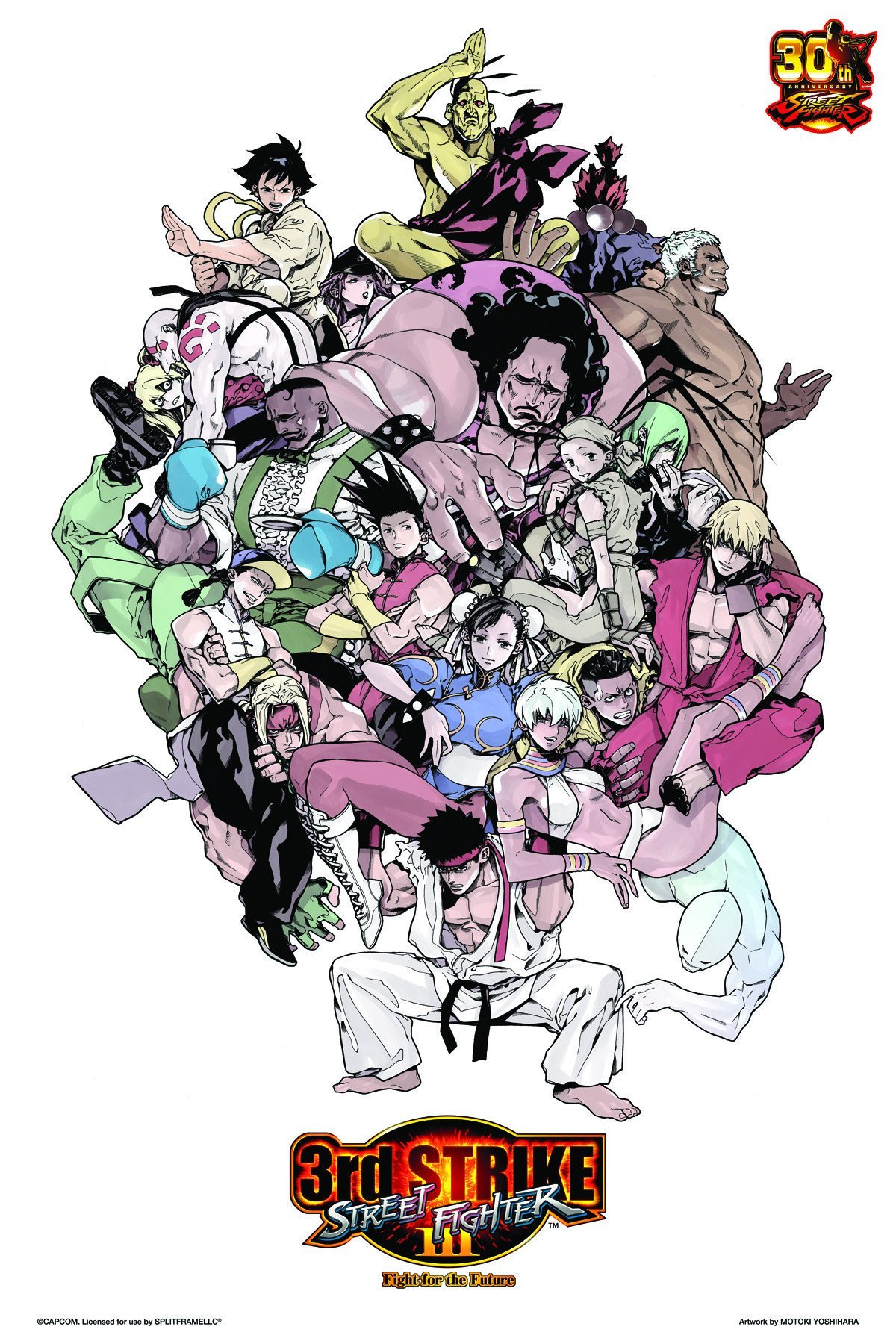 By David RodriguezMarch 31, 2019 No Comments

What’s up, nerds? We’re back for another iteration of Sound Test, our feature where we delve into exceptional video game music and how it enhances the experience of the game it soundtracks. Today, I hope you’ve been in the lab practicing your execution because we’re going to shoryu-get into the delightfully 90s original soundtrack for Street Fighter III: 3rd Strike: Fight for the Future, originally developed by Capcom in 1999 and composed by Hideki Okugawa!

We weren’t all as lucky as some growing up near a well-stocked, regularly updated arcade. The late 90s and early 2000s marked a sharp decline for the industry, closing tons of arcades and leaving a lot of us to be patient while companies like Capcom ported their highly demanded arcade games to the generation’s consoles. I played a good amount of fighting games very casually in arcades growing up like Street Fighter II, Primal Rage, and… Mega Man 2: The Power Fighters (hey, it was fun, and I was a Mega Man fan!). I actually never played 3rd Strike with any regularity until it got a port over to the Xbox 360 as Street Fighter III: Third Strike Online Edition in 2011.

Street Fighter vets really appreciate 3rd Strike for being a more technical take on the SF formula. At its foundation, the series staples are all there: six buttons, a wild cast of relatable characters, exotic locales, and best of three takes the win. What set it apart was its higher focus on technique, as well as required mastery of strict combo link timing and new skills like parrying. Coincidentally, this is the SF game in the series a lot of people overlook because it’s pretty damn hard to get good at. But you know what’s easy to appreciate? This fire soundtrack.

It seems like Hideki Okugawa really did whatever he wanted to do, taking influences from the 90s club scene, jazz, film scores (“Crowded Streets” straight up samples the melody of the “James Bond Theme” from the popular 007 spy films), traditional East Asian music, and hip-hop to make one of the most memorable fighting game soundtracks ever made. The sound chips he was working with allowed for more detail in the music. In the face of today’s fighting games taking a modern, safer approach to music, it’s refreshing to look back on 3rd Strike‘s eclectic music even though it was clearly a product of its time.

The best part about the OST is there’s equal parts of just about everything here. Some of the best songs incorporate many influences to create multi-textured movements to help you focus on getting your footsie game right. While “Snowland” has an appropriately chilly, playful saxophone sound to it, you can still hear that quick drum and bass percussion, and washy, expanding synths filling in the negative space. “Kobu (Inspiration)” is Ryu’s theme, and just like the character himself, the track begins stoic and meditative, utilizing a slow-and-low approach with varied percussion, becoming something more fierce with grinding rock guitar and drums in the latter half, as if signaling a battle.

While the mix of elements is definitely intriguing, the songs that fly straighter along a path of a single type or genre are also quite enjoyable. The most unabashedly jazz track is without a doubt “Jazzy NYC ’99” – who would have thought? It’s a lively number with digitized saxophone, a bouncy bassline, and synth lead that rises just like the tension of a final round bout. It also contains a drum sample of the cymbal-heavy “Here Comes the Meter Man” by The Meters, a 60s funk outfit from New Orleans.

On the other side of the spectrum, “Beats in My Head (Tribal Dance)” could have been bumping in clubs all around the world with its super catchy rhythm. The vocal sampling gets pitched up and down, the synths pulse and clash in the mix; it all just screams 90s to me. It’s a delightful track to match the sunny personality of the Kenyan princess Elena who uses the similarly rhythmic capoeira fighting style to get a leg up on the competition. The song was given a stellar update for Elena’s appearance in Ultra Street Fighter IV. The same dance-heavy approach is taken with “You Blow My Mind”, which is the theme for England’s posh pugilist, Dudley (my main if you were curious). A ceaseless EDM backbeat is colored in with a variety of synth tones including a neat wobbly one giving it a trance-ish tone. It has a Yuzo Koshiro (composer for the Streets of Rage series) vibe to it which is incredibly nice.

Probably the most memorable thing about 3rd Strike‘s soundtrack is how it incorporates hip-hop and its various elements. It wasn’t just a song or two either, a loose rap verse, or adlibs thrown lazily onto a track either. There were entire songs produced from the ground up to be hip-hop as hell, and several other tracks utilize sampling techniques and instrumentation that are integral to hip-hop’s foundation as we’ve seen already. One of my favorite examples is a rather simple one. “The Circuit” is a rousing song punctuated by sampling the drum line of Eric B. & Rakim‘s “Let The Rhythm Hit ‘Em”. This combined with the guitars from “Kobu” set the stage for larger-than-life German wrestler Hugo, who this song is the theme of.

The crowning jewel of the whole soundtrack isn’t even in the game, at least the full version. There was a couple rap songs produced and written from the ground up for 3rd Strike, one of them is “Let’s Get It On”. Produced by Okugawa himself, it sees Canadian rapper Infinite take up the mic for some trash talk bars, as if trying to get into the head of his opponent right before sliding a quarter into the game’s cabinet to challenge them for arcade supremacy. The part of the song that anyone that’s played the game will be familiar with is the hook:

This is the music that plays during the fighter select screen, hence the countdown in the lyrics. The production has a great east coast hip-hop vibe to it. You can hear turntable scratching, jazzy bass samples, and more to give it a real authentic feel. It was still nice to see hip-hop earnestly embraced as a foundational element in a game like Street Fighter III. There’s a couple other ‘bonus’ rap songs, “Third Strike” and “Moving On”, if you’re interested in more of this aspect of the soundtrack.

Okugawa seemed to have a lot of fun making this music, and it shows with its seemingly disparate mix of elements lovingly brought together into a cohesive project, tracking for one of the best fighting games of all time. Though there are a couple outliers, the meaningful crux behind 3rd Strike‘s soundtrack is one of action. Even after years of playing fighting games of all kinds and hearing other admittedly solid OSTs, there’s nothing else I can see being background noise while I try to hit confirm into Dudley’s super art or attempting to parry kick pressure from Chun-Li (I’m not Daigo Umehara after all).

If you’re lucky enough to live near a working arcade cabinet of 3rd Strike, that is no doubt the best way to play the game. If you’re looking for a more conventional way to play and don’t fancy yourself a quarter kind of person (or just don’t want to get bodied by the arcade vets that likely frequent the place), the newest and easiest way to play is the Street Fighter 30th Anniversary Collection which packages 12 (!!!) classic Street Fighter games. It includes every Street Fighter III iteration, and is out on the PS4, Xbox One, Switch, and PC. It’s not perfect, but it’s a great value and would require the least amount of work to play. Thanks to the recent generosity of Capcom, they made a lot of OSTs for their games available on streaming services like Spotify. You can listen to 3rd Strike‘s soundtrack on there right now! Special thanks to WhoSampled for helping me source the samples.