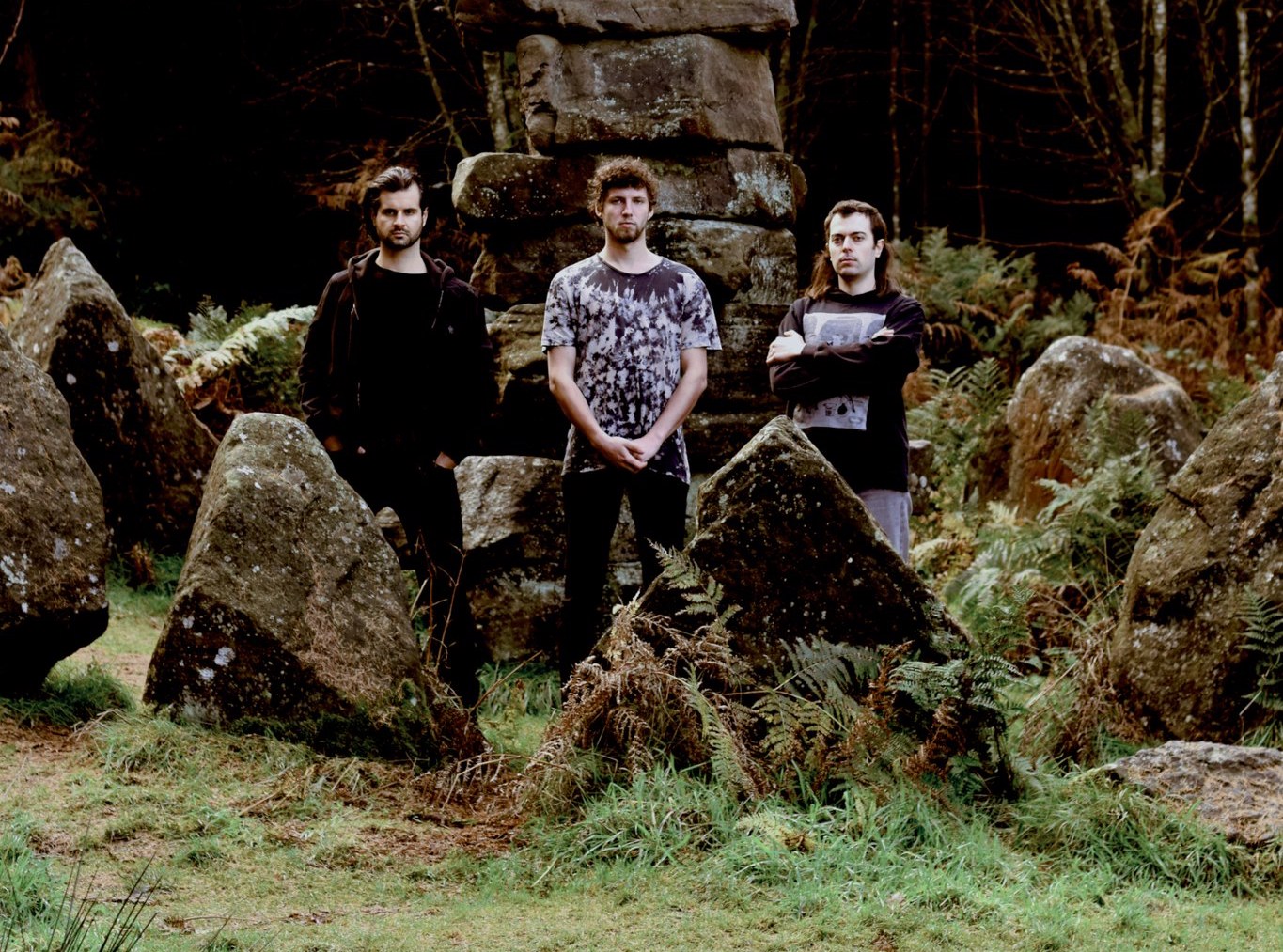 For many, doom metal is a genre entrenched in misery, darkness, nihilism, horror, and tons of weed references. It’s music on the fringes of society that appeals to those who crave heavy, sluggish riffs, longwinded tempos, and tales from the occult. But for others, doom is more than this – it’s a way of life, a response to the world around them. It’s an experience that forms a subculture within an extreme musical underground based around the idea of a tight-knitted community with DIY ethics. Yet, whilst the doom metal scene has occasionally faced uncertainty due to its strongly polarising sound and underground and obscure status, many artists are still championing this style of music, expressing the best that doom has to offer to the world. And right now, no band are achieving this in quite the same way as this week’s Weekly Featured Artist Sheffield-based sludge/doom metal trio Kurokuma.

Kurokuma play heavily layered, doom-driven sludge, executed with excessive force whilst combining a variety of diverse musical features from electronic music to the incorporation of ancient rhythms and tribal melodies. Their music is often caught in a crossfire between damagingly brutal and doomy sections with surprisingly exotic instrumentals that offer something fresh and distinctive to the band’s sludge-driven sound. Whilst commenting on these influences, drummer Joe Allen offers an insight into the diverse range of artists who helped to shape Kurokuma’s sound early on:

‘At the start of the band it was the usual suspects, but mainly Electric Wizard and a live show from Conan that [guitarist/vocalist] Jake and I caught in Sheffield. Then we were listening to a lot of electronic music from Latin and Central America: Dengue Dengue Dengue, King Coya, Mati Zundel, Jorge Reyes are a few names that spring to mind. The idea was to combine doom with something more colourful and energetic.’

In regards to the band’s native homeland Sheffield, Kurokuma have made a significant contribution to the development of the doom metal scene within the city whilst also helping put slow, heavy music on the map further afield. The band have made frequent collaborations with notable doom acts such as Conan and Vinnum Sabbathi through various splits and live bootleg releases which has seen a nice exchange of sounds and ideas between doom artists in various locations. Commenting on how the band’s own environment played a huge part in shaping their sound they say:

‘We used to practise at Portland Works, which is where stainless steel cutlery was first made, so that place has an important heritage. There are still metalworkers there, alongside band practice rooms, and we used to find bits of metal lying around. We decided to incorporate that into our set, using a metal bar as an instrument. Anyone who came to our early shows will remember that, and the very first music we recorded also included it.’

Along with developing innovative directions for doom metal with Kurokuma, Joe has also played a significant role in establishing a broader doom, sludge, and stoner community in Sheffield through non-for-profit label Holy Spider Promotions which he runs alongside fellow doom musician Craig Bagshaw (Gozer FKA Archelon and Ba’al). Holy Spider played a prominent role in forming an underground doom network, putting on numerous gigs across the city including notable doom/sludge acts such as Primitive Man. These early accomplishments are further highlighted in The Doom Doc, a highly recommended watch for any doom metalhead out there, as the artist explains:

‘Craig and I basically wanted to put Sheffield on the map for slow and heavy gigs at the time and we just started doing it, and I think we achieved that eventually. I don’t know whether it shaped our sound because we were always pretty intent on doing our own thing, but me doing Holy Spider benefited Kurokuma massively and gave us opportunities to gig swap with people all over the country, and further afield. And the amount of people the know us via The Doom Doc as well is great.’

Currently, Kurokuma have just released their first full-length album Born of Obsidian, a pummelling sludge record which features a range of extreme riffs, volatile rhythmic song structures and distinguishable ancient melody lines which resemble that of early Aztec music culture. When considering the recording process of the album the band share their overall thoughts concerning the fun they had whilst recording the album, studio collaborations, as well as some of the challenges that were presented to them predominantly due to various lockdowns due to the COVID-19 pandemic:

‘It wasn’t without its challenges. We’ve never had an easy time making releases. The recording itself was fairly enjoyable, spending time down in London in between lockdowns. It was almost like a holiday, playing with a load of new toys in the studio, with Sanford Parker. It was a bit tricky getting Sanford over from the US while travel was still difficult.

‘The mixing stage was a massive challenge, and it took a long time and lots of work with Chris Butterworth to get something we were happy with. We’re perfectionists anyway, but as it was our debut, we wanted to do it right even more-so’.

As I mentioned earlier, a major influence on Born of Obsidian that features frequently, and adds that extra dimension to the record, is the Aztec influences. It is within tracks such as “Jaguar” and “Under the Fifth Sun” that utilise these tribal rhythms whilst tracks like “Sacrifice to Huitzilopochtli” and “Ololiuqui” employ ancient-like grooves that blend in well with dread-soaked sludge phrases and jam in a perpetuated fashion. The band furthermore emphasise the openness of using these influences:

‘It just came about naturally. It’s something we have an interest in anyway, and it seemed to fit extremely well with the music that was there. The tribal/folk nature of our sound is something that has defined us so far, and much of it comes from Latin and Central America. We’ve always wanted our music to have deep meaning, and a symbiosis between the lyrical content and the music. And Aztec history is so rich with energy and the possibility for creating atmospheric, vivid art. We took a lot of historical facts and twisted them in a mystical, psychedelic way and I think it just worked. That to me is the heart of Kurokuma, at least so far.’

Kurokuma are currently embarking on a UK headline tour, playing a handful of UK shows to promote Born of Obsidian and show the rest of the UK the very best currently that doom and sludge metal music has to offer. They have also been offered a range of festival dates as well as shows in Mexico South America, Russia, and Europe. Yet, in terms of Kurokuma’s future, things are looking optimistic and highly creative for all members involved, be it independently or through a collaboration with other artist and/or labels as Joe elaborates:

‘We all have our own lives and things we’re working on outside the band, but Kurokuma is very important to us, and we feel lucky that we get to do this together. We’ve all been in various bands and projects, but this certain combination of members is special. In terms of albums, it’s almost like the seal has been broken. We’ve seen that people want music from us; the response honestly was more than we expected. And we did it all on our own. Not saying we wouldn’t sign to a label if it was the right one, but we know we could do everything ourselves again if we wanted to.’