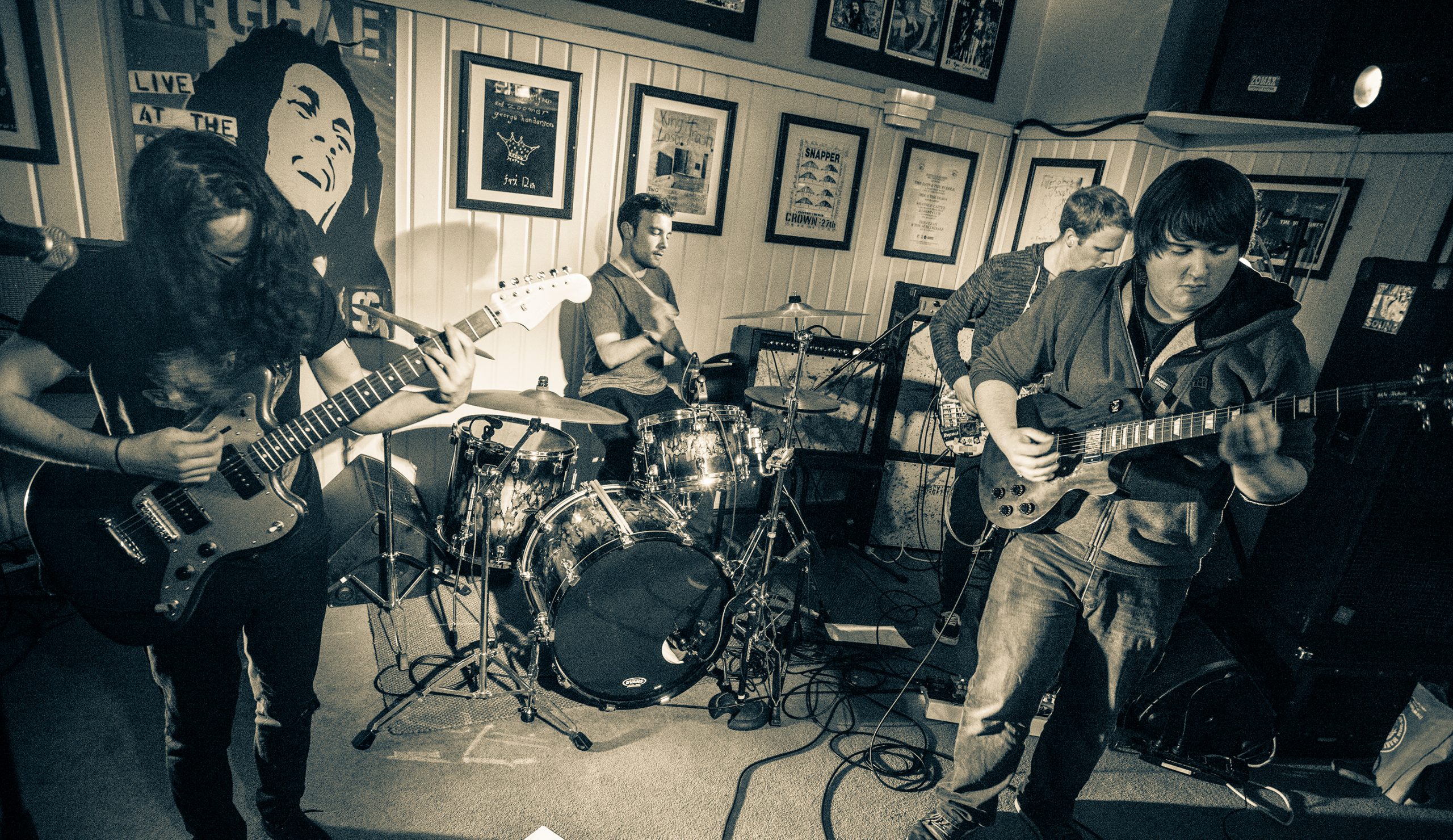 No one knows a local music scene as well as the people directly within it. If you’re familiar with your local scene, especially the more underground bands, you probably know that there is heaps and heaps of awesome music hidden away there. One thing that grinds my gears is people loudly proclaiming that ‘the local scene sucks’, or, worse still, that ‘there’s no good new music’ without ever having bothered to go out to a local show that isn’t a covers gig. Where I live, these people are especially loud, and I’d love to just shove a whole bunch of local CDs, cassettes, download codes, and gig posters into their indolent mouths.

That’s why I like to take every opportunity I get to highlight local bands from my part of the globe: the sultry, isolated southern half of New Zealand. Sure, the quantity of local bands is low, due to the entire region being home to just over one million people, and no single city housing more than 400,000 – but the bands down here are quality. We get Left Or Right’s bouncy blend of metal and reggae, death metal aficionados Ayamvoid, noise duo Murgatroyd (check out my WFA on them here), the mighty death-sludge trio Swamp Dweller, the gorgeous and unnerving Russian Blue, just to name a few – and the infectious Ashes To Battle.

Looking out of my window today and listening to Ashes To Battle’s recent EP, The Great Outdoors, I am subjecting myself to a delightful juxtaposition. I see wet asphalt, the sky a monotonous silver, a leafless birch tree swaying without much motivation, and several squat, pallid houses; in short, grey – and if there’s one thing The Great Outdoors is not, it’s that. Ashes To Battle, consisting of guitarists Chris Glover and Liam Seque, bassist Daniel Potter, and drummer Ryan Finnie, play a kind of modern interpretation of pop punk: short, quick songs packed full of joyous riffs, energetic drumming, and an infectious attitude.

Hailing from Dunedin, at the bottom of New Zealand’s South Island, Glover and Finnie started Ashes To Battle in high school, originally under the name Anarchy Drive. While they were practising for a chamber music competition, they decided to start a band, swapping piano and clarinet for guitar and drums. At this point in time, they were playing exclusively Green Day covers, until Glover started writing his own songs. A short while later, bassist Potter joined the team: ‘we actually met Daniel through a now defunct online forum – meeting a stranger on the internet is usually a recipe for disaster, but we got pretty lucky!’. The band found that ‘finally having a bassist that was also into technically difficult and high-tempo punk music really helped us to solidify our identity as a band that did just that’. Ashes To Battle now consider themselves ‘an instrumental band by default’, explaining that ‘for quite a long time, we had the intention of getting a vocalist, but just never found that anyone was a good fit for our songs’.

Although Ashes To Battle don’t listen to Green Day or Rise Against anymore, these artists have played an important role in shaping the band’s sound. Their influence is especially obvious in the attitude and tempo of the songs, as well as the drumming. System Of A Down introduced more dissonance and heaviness to Ashes To Battle’s sound, while the ‘tasty bass riffs, and the super tight and hard hitting drums’ of Karnivool also found their way into their music. Ashes To Battle also found Fall Of Troy’s frequently changing time signatures influential on their sound.

The name Ashes To Battle comes from a Dance Gavin Dance song, “The Rattler”. Finnie misheard the lines ‘Asses, asses, asses in battle/Die die die die die you bad apples’ as ‘ashes to battle’, and it ended up becoming the band’s new name, since they found that Anarchy Drive didn’t fit the direction they were heading.

In 2018, Ashes To Battle released their first EP, entitled Never Trust A Revival, a collection of songs written between 2013 and 2016. It’s short and sweet, consisting of six songs, most of which are under three minutes long. They succeed at something that many other bands struggle with: knowing when to end their songs. All of the tracks tend to understay rather than overstay their welcome, and occasionally leave me wanting just one more repetition of a section. There is a lot of lovely clean playing on Never Trust A Revival, especially earlier on, two guitar parts working wonderfully together. Tender melodies and sweet arpeggiations are hallmarks of this EP, as are the quirky riffs interspersed throughout the more driving distorted sections. First and foremost, Never Trust A Revival is one thing: fun. Even the more contemplative clean sections repeatedly fail to hold back the simmering sense of joy and liveliness.

With 2020’s The Great Outdoors also came a slightly heavier sound, which Ashes To Battle attribute to second guitarist Seque joining the band. To me, the songs also seem a little more focussed, more structurally sound, and more confident. What has stayed the same is the infectious energy of the songs, as well as their live attitude. Ashes To Battle explain: ‘we’ve made the conscious decision to try to make the recordings accurately reflect our live set – so we avoid going too overboard layering on extra parts that we couldn’t normally perform’.

One exception to this is The Great Outdoors’ opening track, “Summer Trouble”, which features trumpet and trombone lines played by friends of the band. These parts were written after the song was recorded, which the band describe as ‘challenging, but rewarding, as it’s the first time we’ve experimented with adding other instruments’. The inclusion of these instruments adds an almost whimsical atmosphere, but also a freshness, a little burst of sweetness in the sherbet of “Summer Trouble”. It’s a great, fun way to start this EP, filled with unusual harmony and rhythms. Where Never Trust A Revival was a little more on the gentle side, “Summer Trouble” opens The Great Outdoors with a generous dose of prog-punk fire.

“How To Dance” is also delightful, certainly a bit more obvious in its punk roots with its main riff, but it too hides surprises in the form of brief, sweet clean sections. It’s like the feeling of running along the beach in bare feet, just below the water line, so that the water leaps up with every step, splashing shins and calves with refreshing droplets. There’s a boundless optimism to both this song and “Summer Trouble”, but it’s especially strong on “How To Dance”.

“Down River” marks a change in the pace of the EP – starting with a spoken word bit from a Joe Rogan podcast with Tool‘s Maynard James Keenan, it soon becomes clear this is a heavier take on Ashes To Battle’s familiar prog-punk sound – the main riff is a lot more rhythmically disjointed, with less rich harmony. It’s a nice point of difference, one that is explored further on the EP’s closing track, “Evil Biscuit”. By far the grittiest and darkest track on The Great Outdoors, it’s a song I couldn’t have imagined working on Never Trust A Revival, showing that the band have certainly developed their sound since then. It even includes an almost post-rock ending section, whilst still maintaining a great amount of attitude.

Even in terms of Ashes To Battle’s writing process, “Evil Biscuit” is a bit of an outlier. The band state that, usually, Glover writes several isolated ideas, works them into a structure, and then the rest of the band puts their own spin on it. The structure might also get tweaked, or new parts added, in this process. However, Ashes To Battle explain that “Evil Biscuit” was ‘an exception to our normal process, in that Liam [Seque] wrote the first riff, then Chris [Glover] expanded on it, and then we spent more time on it in the band room’. They also agree that recording practises is a great help, as it ‘highlights which areas work, and which ones don’t’.

Speaking in terms of the recording process, Ashes To Battle have a very DIY approach, with The Great Outdoors having been recorded and mixed by Finnie on equipment he’d collected over the years. He found the mixing stage to be particularly challenging, and explains that he ‘found that it’s a lot harder mixing your own music compared to doing it for songs that aren’t your own’, saying that it is ‘very easy to get caught up in all of the minor details, and miss the big picture’. For this reason, he got a friend to help him master The Great Outdoors, as he found that his ears ‘were pretty fatigued and desensitised to the songs by that point’. He also felt he needed to remind himself to not to overthink and take things too seriously, and adding the word ‘noice’ at the end of “Down River” (‘just purely for the meme’, as Finnie says), was a good way of doing that, as well as encouraging him to ‘just release the damn thing’.

As The Great Outdoors was released at the end of March, just a few days after New Zealand went into a nation-wide coronavirus lockdown, Ashes To Battle haven’t yet had a chance to host an EP release show. They were looking forward to organising this, and were planning on including a live horn section, but unfortunately they never got a chance to make these plans a reality. They were also gearing up for death metal trio Ayamvoid’s EP release, for which they were supposed to open. Ashes To Battle were particularly disappointed not to be able to do this as they cite Ayamvoid as their favourite band to play live with, due to them being ‘a bunch of super great guys, and they are a wicked band, such brutal riffs’. Having a prog-punk band open for a death metal act might not seem very conventional, but in a town as small as Dunedin, it’s very common. Ashes To Battle explain that, in Dunedin, ‘there is a diverse range of great bands – we do pretty well for a fairly small town’. Further, Ashes To Battle enjoy the fact that their blend of genres means they can ‘fit into playing a variety of different gigs’.

Now that things have calmed down a bit in my wee corner of the world, I’m looking forward to seeing Ashes To Battle live for the first time. The band say that they’ve ‘got plans to have a belated EP release show, but don’t have any dates set for that yet!‘. If you would like to be kept up to date with their shenanigans, make sure you follow their Facebook page – who knows, perhaps there will be videos from the EP release! In the mean time, head over to their Bandcamp to check out The Great Outdoors and Never Trust A Revival in full, and don’t forget to keep your eyes and ears open to local music in your hometown. I’m sure you’ll find some incredibly rad artists.